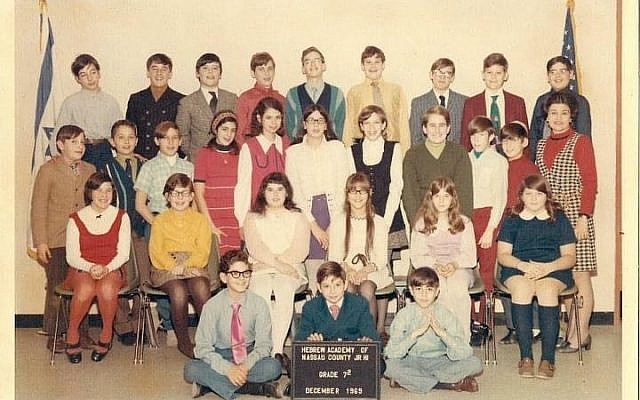 The author is in the back row, fourth from left. David Friedman is in the middle row, first one on left. (Photo Credit: Michael Feldstein)

Although its veracity has recently been questioned, legend has it that F. Scott Fitzgerald once said to Ernest Hemingway, “The rich are very different than you and me,” to which Hemingway replied, “Yeah, they have more money.”

There are several ways to interpret this quip, but my takeaway is this: Some of us may have more money, or be better looking, or be more popular, but ultimately we all have many of the same wants, needs, fears, and desires, regardless of our status.

I mention this because I just reconnected with a former elementary school classmate – an individual who has recently achieved a fair degree of fame and status in the political world. I’m speaking of David Friedman, the former United States Ambassador to Israel. While attending a family bar mitzvah in Florida, I noticed Friedman davening at the same minyan on Shabbat morning.

After services were over, I approached him and introduced myself, not 100% certain that he would even remember me. After all, it has been 50 years since we were classmates in 8th grade at the Hebrew Academy of Nassau County.

But when I told him who I was, his eyes lit up – and we began reminiscing about days gone by.  He had spent some time hanging out at my house after school, and fondly remembered how kind my parents were to him.  He was part of a short-lived band that we put together with a couple of other classmates in eighth grade (we practiced in our basement). We spoke about some teachers who we had … asked each other about who from our class we were still in touch with … and shared updates about our children and grandchildren.

Friedman might possess former President Trump’s personal cell phone number, and it’s true that he has met with many foreign dignitaries, but on that Shabbat when we reconnected, we were simply two people who went to the same school together 50 years ago. The fact that he had been in a position of political power meant nothing to either of us.

I feel the same way about another famous political figure who I have been fortunate to get to know. Former Senator Joseph Lieberman lived in Stamford for most of the time he represented our state in Washington, DC, and when he was in town for Shabbat, he davened in the row in front of me.

And while I might have wanted to ask him about a recent political issue or a Senate vote when we were at kiddush after services, I never discussed politics with him.  Instead, we would speak about more mundane – but much more personal – matters.  For example, he was very proud that his daughter Hani attended Nishmat in Israel, and he raved to me about a Torah class that she had given.  We also enjoyed discussing the history of the Orthodox Jewish community in Stamford, and some of his recollections.  Back in 1960, when the mikveh in Stamford was built as part of Congregation Agudath Sholom’s new building, his mother was the only woman who used the mikveh monthly (it was mainly used by brides and for conversions).  We also spoke about the time that he had to walk to Stamford High School on Friday night to attend his school prom.

I don’t know this for certain, but my guess is that famous Orthodox Jews such as David Friedman and Joseph Lieberman actually enjoy being regular folks once in awhile, away from the limelight and in a position to be themselves.  We often put these kind of individuals on a pedestal, when in fact they are actually much more similar to us than we might think.

I don’t know any other nationally famous people very well.  However, there is a group of individuals who are experts and leaders in their fields, to whom I have been able to reach out to and with whom I have developed a relationship.  Whenever I read an article that I really like, or hear a shiur that I enjoy, I will often contact the author or speaker by email, perhaps with a question or sometimes to simply acknowledge how much I enjoyed reading or listening to what they had to say.  Nine times out of ten I will receive a response.  And this email exchange has often led to a closer friendship.  Email and social media has made the world a much smaller place, allowing for people like myself to develop new relationships with individuals with whom I never imagined I could connect.

Now I’m not suggesting that if you send an email to Michael Jordan or Lady Gaga you will receive a personal reply in return.  However, there are many others who might be very interested in hearing from you – and who will gladly return an email or a Facebook Messenger text.

In Parshat Ki Tisa, Hashem instructs Moshe to collect a half-shekel from every individual 20 and older. God says: “The rich shall not pay more and the poor shall not pay less than a half-shekel.”  This seemingly simple idea — that each Israelite, regardless of their personal wealth, is required to pay a half-shekel for purposes of the census — has much to teach us. For one thing, there’s the essential lesson that everyone is equal in the eyes of God.  We all might have different amounts that we can — and should — contribute to the community.  However, when it comes to being counted and determining who matters in the eyes of God, rich and poor, educated and non-educated, famous and not so famous are totally equal. We all count the same.

I think David Friedman and Joseph Lieberman would agree with that as well.