The day after two days of Rosh Hashana, right before Shabbat Shuva, and a week before Yom Kippur, our attention availability is low. And yet, reflected in the establishment of a fast day and the amount of detail allocated for it in the verses of two separate books in Tanach, there is a powerful message to this day. But first, please travel with me in time back to the year 586 BCE.

In year 586 BCE, Nebuchadnezzar, king of Babylon, destroyed Jerusalem and the First Temple, built by King Solomon, and took king Zedekiah and the people of Judea into exile in Babylon. There were, however, some who were left in Judea. Among them, some of the poorest and least-known families to live in Judah, as well as the prophet Jeremiah who found favor in the eyes of the king of Babylon. Yes, the Jews went into exile, the Temple was destroyed, and the country was in ruins, but there was still some hope.

Gedaliah is chosen to be the loyal leader who will assure the king of Babylon that there will be no more rebellion and that the Jews remaining in Israel will remain faithful to Babylon’s crown. It is not a perfect situation, but it is the last spark of hope for Jews living in Israel.

In a time of unprecedented destruction and chaos, Gedaliah steps in, assuring the people living in Israel, there is hope.

“Gedaliah swore to them and to their men, and said to them, “Fear not the servants of the Chaldeans; dwell in the land and serve the king of Babylonia, and it will go well with you.”

Gedaliah does not paint the situation in rosy colors. He does not need to. Everyone knows the situation is dire; the question is how ominous. Gedaliah convinces the people remaining in Israel that not all has been lost. Gedaliah urges them not to embrace fatalism. Gedaliah urges them not to run in the tempting arms of neighboring Egypt, and that patience will pay off. Though occupied by the despised Babylonians who destroyed the holy Temple, it can still work. One wishes that this same message would have resonated five hundred years later as the Bar Kochva rebellion picked up momentum, and Jews in Israel thought they have nothing to lose in their fight against the Romans. The embrace of fatalism is tempting and relieving. Gedaliah urges the Jews not to do it. With patience, endurance, and perseverance, they will be able to have a seed in the land of Israel. Tragically the vast majority of Jews were forced into exile to Babylon, yet there can be hope. A seed of a Jewish community can remain in Israel and perhaps sprout up and even blossom. There is hope.

Then came the twist.

“And it was in the seventh month that Ishmael the son of Nethaniah the son of Elishama of the royal descent, came with ten men with him, and they struck down Gedaliah, and he died, and the Judeans and the Chaldeans who were with him at Mizpah.” (Ibid)

Ishmael is of the royal house of David. He is somewhere in the line of succession to a royal lineage, now out of power. Seeing Gedaliah appointed to manage the remainder of a nonexistent kingdom, he gets jealous. Even though there is no kingdom, he feels like he should be king. Described in more detail in the book of Jeremiah (chapter 40-41), Ishmael comes forth in a brutal and cunning way and assassinates Gedaliah. He butchers Gedaliah and all those with him and massacres anyone that comes near him. After taking the remaining Jews captive and realizing he will not be able to sustain his control over them, he makes a cowardly exist and escapes back to the king of Amon, who was providing him with shelter, to begin with.

What did the remaining Jews do then?

They left for Egypt against Jeremiah’s desperate pleas.

“And all the people, young and old, and the officers of the armies, got up and came to Egypt because they were afraid of the Chaldeans. (Melachim II, Ibid)

They could not do it anymore—first, the siege, then the destruction of Jerusalem, and now Gedaliah’s assassination. Fast forward 2,600 years later.

Here we are, mourning the day of Gedaliah’s assassination. Indeed, a horrible event. Yet we may legitimately wonder why are we mourning this tragedy after the return of Jews to Israel? What is the relevance of this tragic event so many tragedies later? Why can’t we focus on the recovery made several decades later with the return of Ezra and Nechemia?

Moses Maimonides, the Rambam in his Laws of Fasts (chapter 5) gives a short background to each fast:

“There are days when the entire Jewish people fast because of the calamities that occurred to them then, to arouse [their] hearts and initiate [them in] the paths of repentance. This will serve as a reminder of our wicked conduct and that of our ancestors, which resembles our present conduct and therefore brought these calamities upon them and upon us. By reminding ourselves of these matters, we will repent and improve [our conduct]”

According to the Rambam, the reason we fast, to begin with, does not necessarily have to do with mourning; it has to do with learning from past mistakes. We fast to mark historic dates from which we must learn; we must learn not to repeat those mistakes.

The Rambam goes on to specifics explaining each day, the fast of Gedaliah being no exception.

“The Third of Tishrei. This is the day on which Gedaliah ben Achikam was slain, and the ember of Israel that remained was extinguished, causing their exile to become complete.”

While the extinction of the last “ember of Israel” is a tragic event, what lesson might we be learning from this?

No people in the world know the power of a spark, an ember, like the Jewish people. Time and again in our history our people have been in that situation, where it seemed like it is all over, yet there was still a little flickering light—and light that ignited into a shining flame.

During Israel’s war of independence, Palestinians set siege to the city of Jerusalem. As the Jordanian army took over the old city of Jerusalem, West Jerusalem was under siege. Every convoy with medicine, food, and ammunition supplies for the Jewish residents of West Jerusalem were ambushed in the hilly roads to Jerusalem. Convoys with doctors, nurses, and students making their way through the narrow roads along the Kastel mountain were blocked by huge stone roadblocks. As cars came to a halt at the roadblock and as passengers sought to exit the trucks and clear the road, bullets and rocks rained on them and entire villages came out to ambush and lynch them. These heroes who sacrificed their lives, attempting to break through to Jerusalem are memorialized as the silent skeletons of their armored trucks sit silently, on the side of the highway to Jerusalem to this day. The area is known as Bab El Wad, the gate to the valley became known to Israelis, by song and ceremony as a testimony to the despair and near loss of West Jerusalem in 1948. 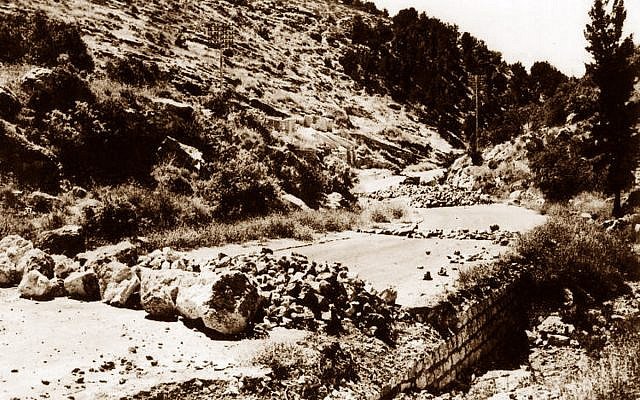 Roadblocks placed by Palestinian nationalists blocking the road to Jerusalem, stopping the trucks, and reading the ground for milia’s ambush. (copyright-free)

The answer was referred to secretly as “the Burma Road”.

Following the 1945 example of how the allies and China have built a backroad bypassing the Japanese through Burma with a great deal of courage, at night, Palmach and Haganah spies discovered a path bypassing the Palestinian ambushes. In the dark of the night, Haganah, and later IDF soldiers paved a secret road to Jerusalem. Quietly and steadily, they began to send trucks with food, medicine, weapons, and supplies into besieged Jerusalem. The trickle got more substantial, the hidden road was widened, and Jerusalem was reinvigorated. Less known, yet as important, was the Shiloah project. Alongside what now became known as the Burma road, Israel’s young soldiers laid a secret pipeline that would bring ample water to Jerusalem. Like the Shiloah tunnel dug 2,700 years earlier by King Hezekiah of Jerusalem, supplying the city with critical water in its time of need, the young Israeli soldiers set a water pipeline that would save Jerusalem. This little ember of resistance flickered in the wind, until it grew into a large flame. All it took was that little dusty side road, that can hardly fit an SUV, and the city of Jerusalem was saved.

As we mourn on the fast of Gedaliah we think about both the past, and the future. On the fast of Gedaliah, we are encouraged not to embrace fatalism. We are reminded of the difference that even one person can make. We are reminded that with even a little burning ember, we can ignite a large flame. During the very same days we engage in repentance, and preparation for Yom Kippur, we are taught that even a little spark in our heart can ignite a large flame. We must never embrace fatalism and determinism. Had we carried this lesson during the Bar Kochva rebellion we may have been able to wait out the Roman empire. On the fast of Gedaliah we mourn the divisiveness, the political violence, the inability to work together even after the utter destruction of Jerusalem, and so much more. Yet more than anything we mourn the extinction of the last ember of Jews in Judea and recognize that all it takes is a little spark, to ignite a huge fire. As we prepare for Yom Kippur, let us allow that little ember, flicker in our hearts, turn into a flame, and inspire a better year.