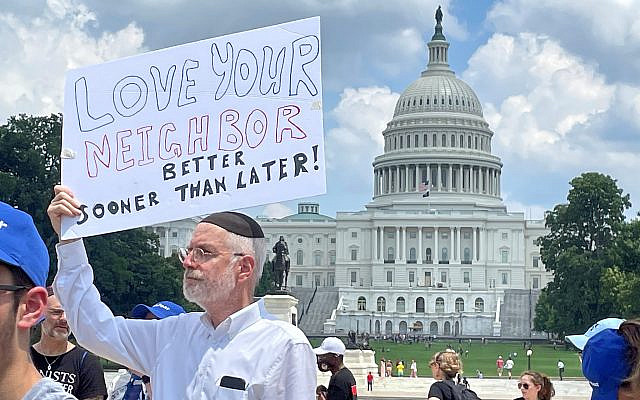 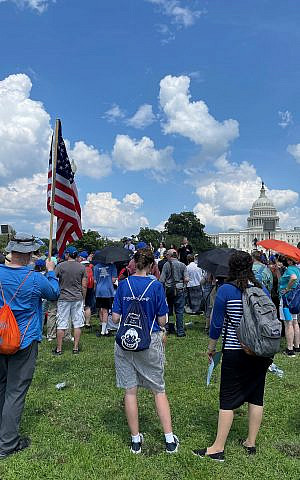 The sparsity of the crowd proved a disappointment. (Photo by Ellen Simon)

I write this as one of the 2,000 to 3,000 Jews who attended Sunday’s “No Fear” rally in Washington, DC.  Over the past few days as I have processed a jumble of emotions elicited by this experience, I have come to the inescapable conclusion that the rally was a failure.

I struggle with labeling it so harshly – it has taken me three days to accept this conclusion – given the powerful speakers and messages it brought to the few who bothered to attend.  It had so much potential.  Multiple presenters brought me close to tears with their personal stories, messages of solidarity, and evisceration of anti-Semitic tropes.

Rabbi Shlomo Nokinski demonstrated immense courage in speaking only a week after being stabbed by an anti-Semite targeting his school in Boston.  Elisha Wiesel carried the torch of his father’s spirit of wisdom, resilience, and community unity in the face of hate.  Joshua Washington, Meghan McCain, Hussein Aboubakr Mansour, and others showed us we are not alone and that others see us, know the truth, and care.

The potential existed.  Each speaker evinced how powerful this occasion could have been.

So what went wrong?  Why did I feel such a sense of disappointment and deja vue in the aftermath?

The answer, ironically, is fear.

The rally failed to garner the support it deserved because of: (1) internal fear of alienating organizational members or outsiders by putting aside our community differences for a day to call out a hatred that affects us all, liberal or conservative; and (2) external fear of potentially violent counter-protestors.  The former resulted in the refusal of numerous “mainstream” Jewish professional organizations to join the rally’s mission until the last minute and thus a failure to properly advertise it and organize transportation.

I wrote about the phenomenon of the politicization of this rally last week, and the most common response I received from people was “what rally?”  They had never even heard of it.  When even clergy of huge congregations are unaware of such an event, you know something has gone terribly awry.

Ironically, the failure to spread the word adequately and timely probably protected us from the counter-protestors many of us anticipated.

The rally demonstrated that we have internalized the politicization of antisemitism.  As a result, we failed to mobilize on our own behalf.  When we choose image over our own brothers and sisters whose ideas do not align 100 percent with our own, we all lose.

I grew up in Baltimore, Maryland, a scant hour from Washington, D.C.  There are approximately 100,000 Jews in Baltimore alone.  There are nearly 300,000 Jews in the greater Washington, D.C. area.  There are over 250,000 Jews in the greater Philadelphia area.  How could a rally to combat the current spate of vicious hate crimes against us garner a scant two-to-three thousand participants given the presence within relatively easy driving distance of 600,000 of us? To say nothing of the more than 1 million Jews in the New York City area, including myself. The streets ought to have been clogged with buses.

Do we care so little for our own skins?  I do not think so.  I think we very much do care.  Unfortunately, some of us care about our political affiliations and appearances more than we do about each other.  This blinds people to the fact that non-Jews who profess to their same politics refuse to stand by us when their solidarity is needed.  That is true for both conservatives and liberals.  If we cannot succeed in standing by each other, we are in trouble.

The repeated message of the rally’s speakers was bipartisanship, de-politicization of this issue, and unification across party lines.  Ironically, many of those sitting right up front at the rally bear responsibility for stifling its success because they failed to evince these three goals themselves in the weeks leading up to it.  By refusing to support the event until the last minute, the organizations we look to as representative of our interests as a people failed us.

We look to entities such as the ADL, the AJC, Federations, and others to stand on behalf of all Jews, not just liberal Jews or the “right” kind of Jews.  When they condition their participation in a “unity” event on the exclusion of their definition of the “wrong” kind of Jews, our enemies win.  When they care more about maintaining an image of liberalism and distancing themselves from Jews with differing opinions, they choose to ignore the current zeitgeist whereby liberals are rejecting us. We let outsiders define who we are and what anti-Semitism is.  We have a right to expect better of these organizations to which we donate our time and money.

The demographics of the event also proved disappointing.  The crowd skewed old.  While one could spot sporadic pockets of young adults, the overwhelming majority of attendees were seniors.  The rally reminded us that we are losing our youth. 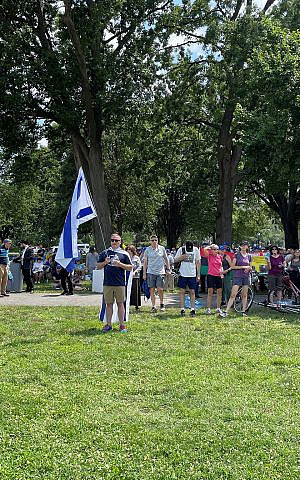 Our youth are at just as much risk if not more of anti-Semites who target university campuses and grade school-aged teens.  They face exclusion from social circles and organizations based on their Jewish identities or opinions of Israel.  They struggle to find a place of belonging.

Did they, too, miss the opportunity to stand in our nation’s capital with their people because they did not know about this event?  Did they not show up because they have been coopted to turn their backs on their people in a misguided attempt to belong?  Do they fear exclusion if they stand with fellow Jews?  Do they just not care?  Unfortunately, because of the disjointed manner in which the event came together, we will never really know.

What we do know is that, if our young people do not take up the banner of no fear, we are lost.  If one stripped the number of seniors present from the crowd, there may have been a scant couple of hundred other people there.  That constitutes an unmitigated failure.

If our youth do not care enough to show up or are not included enough in our efforts to educate about antisemitism, we will fail as a people within a generation.

Finally, while the speakers represented a diversity of opinions as well as religious beliefs and races, the attendees were almost 100 percent Jews.  We had allies in the speakers, but no one showed up to stand beside us.  Was it because people did not know about the rally or because we do not have allies in the communities around us?  Again, we will never know given the nature of the rally’s formation. 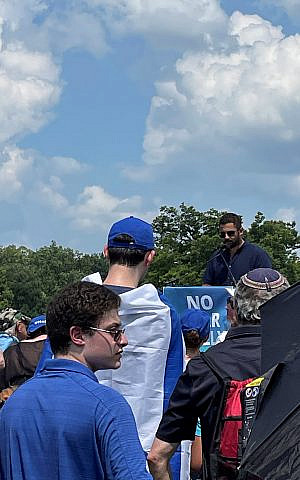 We cannot underestimate the importance of cultivating external allies.  Nazi Germany and the countries it invaded lacked a critical mass of civilians willing to stand with us and for us.  We are not numerous or strong enough to stand alone.

The many disappointments surrounding this rally dredged up memories for me of past failed rallies.  This is not the first time in my life that I have stood shoulder-to-shoulder with my brethren in response to a spike in anti-Semitism.

In the midst of the second Intifada roughly twenty years ago, anti-Semitism became rampant in Oxford.  You could not walk down the main pedestrian thoroughfare – Cornmarket Street – in the spring of 2002 without seeing an Israeli flag spray painted with a swastika.

Holocaust deniers were invited to speak at the Oxford Union and Middle East Centre, where I was obtaining my M. Phil. In Modern Middle Eastern Studies.  I was excoriated by faculty for writing about Israeli politics because I failed anywhere in my thesis to include a defense of Israel’s right to exist.  People drew swastikas on magazines and left them in public spaces for me to find.  A faculty member at my college called for the murder of American Jews in Israeli settlements in Egyptian newspapers without any repercussions.  I was called a Nazi because I supported Israel in the midst of the violence that characterized that year.

Upon hearing of a 500-strong march against Israel planned in the center of Oxford University,  I joined with a handful of international Jews and Jewish undergraduates to stand behind a small folding table on one side of the street in response to the anti-Israeli marchers.  We played uplifting music.  We had posters of both Israeli and Palestinian flags.  We projected a message of peace and coexistence.

Fewer than ten Jews showed up to stand with us.  Zero non-Jews stood with us.

When the marchers reached their destination on Broad Street, we discovered our folly.  Oxford police sitting atop horses formed a line in front of our table to protect us.  The horses bucked as people threw trash at us and tried to reach us.  My American friend and I regarded each other wide-eyed as we realized what fools we had been.  We underestimated the level of fear people felt.  We also underestimated the pitch of hate that lent legitimacy to that fear given the level of anger evinced by the crowd.  We had reason to be afraid.

Fear, apathy, and non-allyship explained the failure of that rally, just as fear, apathy, and non-allyship explains the failure of this one.  This week, I have felt the echoes of my disappointment twenty years ago.  I returned from England feeling blessed to live in the United States where such activity was not condoned.  We have now transformed into Europe. 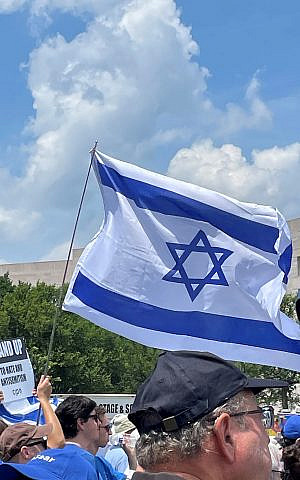 Fear still characterizes our responses to antisemitism, no matter what labels we apply to our rallies.  We fear what others will think of us if we stand beside those who hold different or unpopular beliefs.  We fear for our image more than we do for our very lives.  Until we do more than pay lip service to the concept of no fear, our feeble attempts to stand up for ourselves will continue to fall flat on their faces.

About the Author
Ellen Ginsberg Simon is an attorney and compliance professional in Upper Saddle River, New Jersey. She has an M.Phil in Modern Middle Eastern Studies from Oxford University and is also a graduate of Brown University and Harvard Law School.
Related Topics
Related Posts
Comments
Advertisement