The Blogs
Yakir Englander
Apply for a Blog
Advertisement
Please note that the posts on The Blogs are contributed by third parties. The opinions, facts and any media content in them are presented solely by the authors, and neither The Times of Israel nor its partners assume any responsibility for them. Please contact us in case of abuse. In case of abuse,
Report this post.

Yesterday, the Israeli-American community got a gift — Anat Katzir, who grew up in Haifa as an Israeli secular woman, was ordained as a rabbi. Here are the words I wrote her as I had the gift to announce her as a Jewish-Israeli-American Rabbi.

One of the questions in Jewish leadership is: “Do we deserve to be called rabbis?” Those present in this room are aware of the fear that maybe “I do not deserve to be a Jewish leader.” Most of us have not finished the Talmud, the Shulchan Aruch and Maimonides. In the language of the “world of yeshivas” we do not “grasp” the Sugia. And if so, can we ordain the next generation of Jewish leadership?

The answer to the question lies in one of the brave sentences of the Talmud: “Yeruval in his generation is like Moses in his generation.” Jewish leadership, in every generation, is as significant as Moses’ leadership. I have been watching and following you, Anat, for 4 years. And from you, and from your friends at AJR I have learned another interpretation of the recitation of the Talmud. The Talmudic statement is not a “comforting” statement, it is a statement that understands something deeply about Jewish and human life.

Our current Jewish communities in New Jersey, Los Angeles, Tel Aviv, and Bnei Brak cry for leadership that dedicates itself to listening to the needs of the community. We need leadership that lives the everyday painful questions of our existence, tackles them, fails at them, but dares to continue to lead and decide on the “Dinei Nefashot” – the “Halakha of life”. In today’s generation, whoever has the time and mental capacity to memorize the Shas (Talmud), they can be a Talmid Chacham, but it is better and safer for the community that they don’t lead us by their knowledge.

Like King David in the Tractate of Brachot, the hands of Anat and her friends, are rough hands that hold the gastric juices of bulimia, the vomit of cancer, the sweat of anxiety; they embrace human pain. Our leadership should be dedicated to deal with these human difficulties and in these issues, Anat, and everyone in this room, we must know every tag and tag (nuance) of human pain, not to fear or be disgusted by it, but to embrace it with love and tenderness. 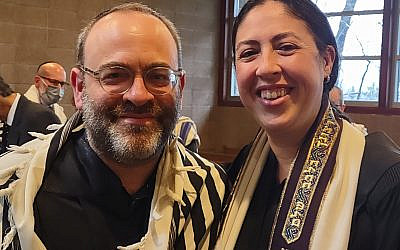 (Photo courtesy of the author)

Moreover, our beloved Anat has another unique role. Anat, you grew up in an Israeli culture that does not understand the importance of women’s religious and spiritual leadership. You grew up in a secular community that, for justified reasons, rejected the Jewish bookshelf of 2000 years of exile, in order to establish a modern state. But times are changing, and the State of Israel and the Israeli-American community must create a generation of religious women leaders who understand Israeli pain, and who will create for them Women’s Israeli-Hebrew Judaism.

Anat, as a woman leader you and your women Havruta must write for us the Theology of Women. A theology that Judaism throughout its history has silenced, and has not allowed the voice to be formed in the womb of women leaders. The role of Anat’s generation is no less complex than the role of Moses, Maimonides, and Rabbi Yisrael Baal Shem Tov. Thank you Anat for standing up to lead our community: “May you grow into thousands of myriads” (Genesis 24:60)

About the Author
Dr. Yakir Englander is working to create Jewish and Israeli leadership in the US at the IAC. Originally from the ultra-Orthodox community of Israel, the Viznitz Hasidic dynasty, Englander earned a Ph.D. from the Hebrew University in Jerusalem in Jewish philosophy and gender studies. He is a Fulbright scholar and was a visiting professor of Religion at Northwestern and Rutgers universities and Harvard Divinity School. In addition, he was a Shalom Hartman scholar in Jerusalem. Englander served as the Jerusalem director of Kids4Peace and later as the vice president of the organization. All of my blogs were translated by Dr. Henry R. Carse
Related Topics
Related Posts
Comments