Israeli security personnel at the scene where two Palestinians carried out a stabbing attack near the Old City’s Jaffa Gate in Jerusalem, December 23, 2015. (Yonatan Sindel/Flash90)

Earlier today, we were saved by a bad cup of coffee. Really bad. It was weak when I like it strong, it was milky and insipid-looking and it had no personality. What’s worse is that it was made without love. I could taste the lack. And yet it was that which distanced us from being at the scene of a brutal stabbing.

We arrived in Israel on vacation yesterday. We had made the decision to be vigilant without being paranoid and to make sure that our children were aware of the situation without it playing a dominant role for the period that we visit the country. Yesterday, we were successful; today we were not.

We spent a wonderful morning at Mamilla. We had been out for a superb breakfast where sat outside in the glorious Jerusalem winter sun and relished the moment of simply being in the city that is the centre of the Jewish world. We had taken advantage of the sales and the “2 for 1″ specials that I never seem to understand and that always cost me more and not less. And then, with kids starting to tire, we decided to walk into the Old City through the Jewish Quarter and down to the Kotel. It was undoubtedly going to be a poor parenting decision when they were already fatigued, and was another example of the triumph of optimism over experience. There were going to be complaints of sore feet but we would deal with that.

We were on our way towards the end of the Mall, where one climbs the steps to the Yafo Gate when I remembered that I needed a coffee. It had after all been around an hour or so I was well overdue. The last coffee place of the mall seemed as good a place as any and my wife ran inside to order whilst I stayed outside with the family. She came out irritated at the poor service, which was only rivalled by the poor coffee and we laughed about it as we quickly drank up ahead of our walk.

We were about to head off when we heard the shots. They were close and they were loud and I had no doubt as to what had just happened. I exchanged glances with my wife and we went into a silent communication as to how to handle the situation. There was a pause, there was silence and then a commotion. Almost immediately we heard the sirens in the background and people started to run. Not away from the scene but towards it.

Shopkeepers became soldiers. Everyone was suddenly armed and the mall sprang into action. No one ran away but everyone ran towards. That was the most overwhelming impression. In a second everyone had a job to do and no one wasted time in doing it. A solitary woman who was sobbing and who had clearly been at ground zero hurried away from the scene was comforted by strangers who held her and who consoled her. She was shaking and overwhelmed, but she wasn’t alone.

And we did the same. My son of 14 was with us. “Come Judah!” I said, and we too took the 50 steps towards the scene. I had a sense that we needed to be part of the collective, almost like one becomes part of a minyan, which is essentially the creation of community. And I needed my son to be with me.

The scene was one of efficient chaos. There was more blood than I could have imagined and more “weaponized” people than I would have thought possible. The one terrorist was clearly dead and the other was being restrained. A victim was being cared for and then lifted on a stretcher, his “payot” falling loosely and defining the demographic. This was the moment that made it real for Judah. That terror doesn’t play favourites.

Traffic was at a standstill and people were shouting instructions. Undercover police with faces covered scoured the scene while frantic passersby tried to determine if they knew the victims and what their status was. If there was still danger we didn’t feel it but we were overwhelmed by the stark reality of the situation, how close we were to the danger and how a poor cup of coffee separated us from being at exactly that spot at the time of the stabbing. The “What ifs” are overwhelming and I have no idea whether to allow my mind to go there or not.

I tried to place a distance between the scene and myself by taking photos with my phone. And I could see that others were doing the same. It didn’t work. A friend called to see if I was ok and asked if I wanted to come out of Jerusalem to get away from the tension. I said I was not all right but I didn’t want to leave. On the contrary, this is exactly where I wanted to be.

We left the mall sometime later. We gathered our shopping bags that now felt worthless and shallow. No one complained about the walk home but every passer by was viewed with suspicion.

And indeed we will go to the Kotel later today where I will thank God for the worst and the best coffee I have ever had. 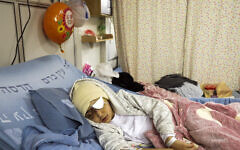 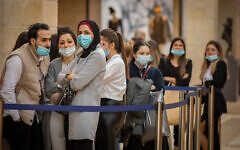