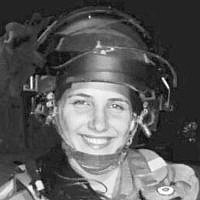 The Blogs
Peleg Hillel
Apply for a Blog
Advertisement
Please note that the posts on The Blogs are contributed by third parties. The opinions, facts and any media content in them are presented solely by the authors, and neither The Times of Israel nor its partners assume any responsibility for them. Please contact us in case of abuse. In case of abuse,
Report this post.

I will never forget that evening at the Bell checkpoint in the Benjamin Regional Brigade. It was 8:30 p.m. on the eve of Passover. Two female assailants armed with knives and a syringe filled with an unidentified substance approached the checkpoint.

The assailants called to us asking for water. As we neared, the two females quickly pulled out a knife and tried to stab us. I immediately understood that this was an attack, and seconds later I responded and neutralized one of the assailants.

As I turned, the second attacker bolted away, and following a short chase with the assistance of observation forces, the assailant was apprehended. We immediately began providing medical aid to the assailant I had neutralized, and only then did I realize the true scope of what had just happened.

All of my friends and my family heard about the attack and expressed both concern and relief. I don’t talk about the incident very often these days, yet in my commanders course, the incident was brought up a number of times.

My new friends from the course were surprised to hear that I was one of the soldiers directly involved in the attack. Honestly, I feel embarrassed when people claim that I acted heroically. Since the beginning of my enlistment in an IDF combat unit I have been training for situations like this. To put it simply, I was in the right place at the right time, and I am grateful that my instincts kicked in.

To each of my close friends and family, the incident plays a different role. My parents were worried after the attack; they were in shock that terror had hit so close to home. Despite this, they appreciated my actions and were obviously incredibly relived that I was safe.

Throughout my combat training, I was taught to respond swiftly in high pressure situations, and was warned that sometimes soldiers in these situations freeze with fear. I never imaged that I would actually end up in a life threatening situation, but I was not scared. I simply acted according to what I have been taught in training. Looking back, I am happy that I was on duty and not someone else.

A few months after the attack, I was sent to the commanders course. One day a private on the base walked up to me and asked “Ah! You’re Peleg? The girl who foiled the attack at the Bell checkpoint?”

It was a strange feeling, but I felt absolute pride to be a part of the Search and Rescue Brigade history, and that my actions during the incident are used as an example in basic training.

In the end of the day, I would prefer to live in a reality free of terrorists and attacks. But as long as there is a need to defend Israeli civilians, I will be there.

As families embark on this new year, we will continue to defend Israel’s residents day and night. That’s our mission, and that’s what we are here to do.

Sergeant Peleg Hillel is a combat soldier in the Home Front Command’s Search and Rescue Brigade. In February 2016, she thwarted an attack at a checkpoint in the West Bank.

About the Author
Sergeant Peleg Hillel is a combat soldier in the Home Front Command's Search and Rescue Brigade. In February 2016, she thwarted an attack at a checkpoint in the West Bank.
Related Topics
Related Posts
Comments