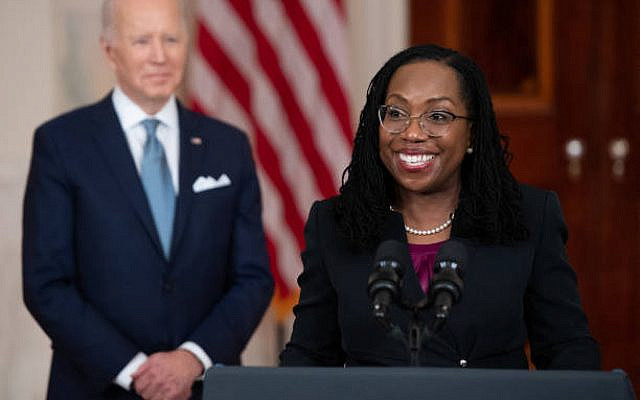 Judge Ketanji Brown Jackson of the United States Court of Appeals for the District of Columbia Circuit spoke at the ceremony announcing her nomination as the successor of retiring Justice Stephen G. Breyer.  She concluded that she hoped to take Justice Breyer’s place but cannot hope to “fill his shoes.”  With Judge Jackson’s credentials and her talent in deciding cases, she will become a worthy inheritor of Breyer’s seat.  It remains to be seen, however, whether she, or indeed, anyone, can match the other aspects of Justice Breyer’s legacy: teacher and Happy Warrior.

A review of the opinions Judge Jackson has written shows that she sets forth lucidly the arguments of the parties and analyzes each one precisely and knowledgeably.  Lawyers could not get one past her.

For example, in her highest profile case, she ordered former White House Counsel Don McGhan to testify before the US House Judiciary Committee in its impeachment investigation of former President Trump. Earlier, McGhan had testified to Special Counsel Robert Mueller’s probe of Russian interference in the US 2016 elections. The judge saw through self-serving arguments the Justice Department made on McGhan’s behalf.https://scholar.google.com/scholar_case?case=12123593834423353849&q=mcgahn+2019&hl=en&as_sdt=20000006.

Moreover, Breyer, as a Circuit Judge and Supreme Court Justice, has honed a unique skill of writing. Every one of his opinions for 42 years has no footnotes.  Judge Jackson’s opinions reflect a similar technique that allows the reader to understand everything without distractions.  In contrast, before Judge Breyer’s ascent to the bench, the legal profession considered use of multiple footnotes  a sign of scholarship. For example, law schools celebrated the footnote-laden opinions of US Supreme Court Justice John M. Harlan in the 1950s and ‘60s.

Harlan and his ilk wrote for the benefit of other judges or law professors in the “learned profession.”  They considered opinions as law review articles. In contrast, Breyer explained that he wrote his opinions for the benefit of “1Ls,” first-year law students, for them to understand. His opinions educated practitioners.  Justice Breyer avoided legal and other jargon and wrote about the practical consequences of the cases.

For example, the US Supreme Court, suspended the Occupational Safety and Health Administration (which regulates safety in workplaces) emergency rule instituting  mask mandates to protect workers against COVID, even while litigation unfolds as to the agency’s authority.

Justice Breyer began his dissent, “Every day, COVID–19 poses grave dangers to the citizens of this country—and particularly, to its workers. The disease has by now killed almost 1 million Americans and hospitalized almost 4 million. It spreads by person-to-person contact in confined indoor spaces, so causes harm in nearly all workplace environments. And in those environments, more than any others, individuals have little control, and therefore little capacity to mitigate risk. . . . So the administrative agency charged with ensuring health and safety in workplaces did what Congress commanded it to: It took action to address COVID–19’s continuing threat in those spaces.”

Having taught at Harvard Law School for many years, Breyer continues his role as teacher. That explains what many find quirky about Breyer’s approach in the courtroom.

When the justice announced his retirement, Chief Justice John Roberts wrote,“His fanciful hypotheticals during oral argument have befuddled counsel and colleagues alike.”   Prominently, in a case involving diversion of groundwater between Mississippi and Tennessee, Justice Breyer asked the following question at oral argument: San Francisco has beautiful fog.  Suppose someone flew there and bottled the fog, taking it home with him.  To whom does the fog belong?  As in the classroom, the professor in Justice Breyer sought to induce counsel to consider the issue divorced from their advocacy in the case at hand.

Ever the teacher, Judge Breyer handed out a written problem to me and opposing counsel who appeared before him  in the US Court of Appeals for the First Circuit.   The issue concerned whether to allow a company to collect funds it would have had to hold in reserve had the utility been regulated at the time of collection.  Unlike a final exam, the test giver learned from the test takers.

Justice Breyer went out of his way to engage with young people.  The Energy Bar Association had asked my boss to arrange a program for the Young Lawyers’ Division.  Our office manager had worked for Justice Breyer, so she asked him to reserve a room at the Supreme Court for a luncheon.  Not only did he, but he volunteered to give the keynote speech.  He sat through the entire meal and told the assembled how vital electricity regulation would remain for the future of the country.

Justice Breyer encapsulated his legacy when he spoke at the White House to announce his retirement.  He recited passages from Lincoln’s Gettysburg Address. He said that the United States continues as “an experiment,” which the next and future generations must nurture.  He called himself an optimist, confident that our progeny will not let him down.