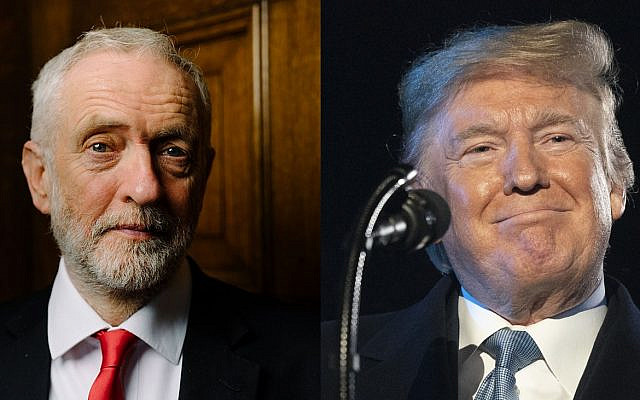 U.S. president Donald Trump has likened himself to former British Prime Minister Winston Churchill during WWII, but the British politician that he most resembles is probably former British Labour leader Jeremy Corbyn. It will be interesting to see whether Trump will suffer the same ignominious fate that Corbyn suffered.

This week, the demise of Jeremy Corbyn was complete. Almost a year ago, after being humiliated at the polls by Conservative leader Boris Johnson, Corbyn resigned as leader. He was replaced by Sir Keir Starmer, and this week, Starmer suspended Corbyn’s membership in the party.

Corbyn has a long history of anti-Israel speech. He once referred to Hezbollah and Hamas as his friends. But anti-Israel rhetoric goes hand-in-hand with anti-Semitism. Under his leadership, anti-Semitism was allowed to fester and grow within the Labour party, and despite alarms raised about it, Corbyn did nothing to stop it, and he continued demonizing Israel to the point where he received Hamas’ stamp of approval.

Upon his election, Starmer promised that he would address anti-Semitism in his party and he promised to visit Israel, but his promises were met with some scepticism because it seemed doubtful that years of unbridled anti-Semitism could suddenly be turned around. But Starmer, while knowing the opposition that he would face by confronting head-on the anti-Semitism within his party, put principles and the soul of the Labour party ahead of political expediency.

If it were not for the American Electoral College, Donald Trump, who lost the popular vote to Hillary Clinton in 2016 by three million votes, would have lost the election and would now be history, and he, like Corbyn, would have never been elected to lead his country. But thanks to an undemocratic electoral system, he ruled the U.S. for four years.

Trump is a dishonest demagogue, just like Corbyn, and he deserves the same fate. If polls are right, he very well might meet that fate, and his loss to Joe Biden is likely to be as devastating and humiliating as Corbyn’s loss to Johnson was.

While for four years, Trump repeatedly abused the democratic institutions of his nation for the benefit of his self-serving politics of division and bigotry, elected Republicans barely uttered a word of criticism. If they suddenly find the courage to fight, they will surprise many.