… there was a faraway, desolate land. Its inhabitants didn’t do much to improve their lot. But they did work to keep away ‘outsiders’ – including some pesky Jews who kept showing up over time, with a fire in their eye and a drive to make the land bloom. You could see it in their eyes, and this time – this 20th century – they weren’t going away.

There were others on the world stage, playing out the story of a world war. Great powers threatened to crush each other, and little Palestine – yep, that’s what the Land of Israel was called at the time, all of it – was caught in the crossfire. Neither the Arabs nor the Jews really relished the thought of having to war with these outsiders, or so it’s told. But they did, because as this tale goes, they were caught in the middle of a crumbling Ottoman Empire. It was this Turkish empire that joined Imperial Germany to declare war on the Allies.

And that’s when the Allied forces stepped in. “We saw here in Beersheba 800 Australian cavalry go against 4,000 embedded Turks with machine guns and bunkers,” Prime Minister Netanyahu said this week at a ceremony marking 100 years since the battles. “The few won against the many. That’s the spirit of the army of Israel, it stands today.”

Netanyahu said that “brave soldiers who are buried here played a crucial role in in defeating the Ottoman Empire, liberating the Holy Land and ending 400 years of Ottoman rule in one great dash.” 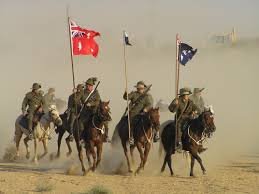 Australian Prime Minister Malcolm Turnbull, who arrived Monday evening for 48-hours to take part in the ceremonies, said that the “mad Australians” who charged the Turkish positions and took the town of Beersheba “secured the victory that did not create the State of Israel, but enabled its creation.

Thousands flocked to Beersheba to witness a fantastic reenactment of the battles, with their countries’ leaders attending. The original biblical town of Abraham, our forefather, is flooded with tourists. What a sight, Australian ANZAC ‘troops’ captured the city from the Ottomans, with modern-day Israelis looking on.

As the Roman philosopher Santayana taught us, ‘Those who cannot remember the past are condemned to repeat it.’ Perhaps this is why we Israelis take our history so seriously. We are thankful for the strength we have been given from above, to protect our nation and to ensure the security of our beloved homeland. Way back when, the mighty British and Australians fought for this right here on our soil in WWI.

We recognize that gift and continue to send our husbands and children into uniforms and into battle to defend our right to exist here, forever. The fairy-tale has become a reality, and this is a lesson that takes no reminding.

About the Author
Ruth Lieberman is an Israeli-based political consultant and licensed tour guide, combining her love of Israel with political acumen to better Israel's standing both at home and in the eyes of the world. She has consulted for political leaders in Jerusalem and in Washington, from work on election campaigns to public advocacy and events. Her tours in Israel connect Biblical history to modern realities, to highlight Israel's achievements and promote its policies.
Related Topics
Related Posts
Comments
Advertisement