In Israel, there a lot of bus stops where people leave old books. This morning I picked up a book from 1967 of the Rabbinical Council of America. While glancing at one of the articles which are rabbis’ sermons, I came across the following :

“Modern Diaspora Jews are banal, devitalized, living without joy, without faith, without ecstasy, a spiritually decentralized mass moving further and further away from the mountain.”  On another page, it asks can such faith be taught?

This is the backdrop of the times that the Dancing Rabbi – Rabbi Shlomo Carlebach when started his life work and mission. Reb Shlomo as he was known to followers was more than just a singing or dancing Rabbi. To take a phrase out the Broadway show the Soul Doctor depicting his life story and message. He was a soul doctor. On reflection, this name soul doctor is much deeper than just the dancing rabbi. Reb Shlomo was a fixer of souls. He used music as a way to inspire and connect people with their souls.

One example of this teaching is from R’ Sam Intrator who was Reb Shlomo’s manager and student for many years. He was the rabbi of the Carlebach Shul in Manhattan after Reb Shlomo’s passing and is currently a rabbi in Miami Beach Florida.

“Celebrating Shavuos with Reb Shlomo was not only immensely inspirational for me because he would relate beautiful teachings on the deeper content of receiving the Torah but he also offered a taste of its transcendental experience. Through teachings, singing, dancing, davening and storytelling Reb Shlomo sought to recreate not just the meaning of Mt Sinai but it’s spirit as well. Truth be said in almost any Reb Shlomo learning or Shabbat experience all these elements were present. Indeed the Chidushei Harim the first Gurer Rebbe said that Matan Torah the giving of the Torah was a one-time occurrence but Kabbalat Hatorah the receiving of the Torah is part of a daily ongoing process. So channelling an energy that takes us to what

Reb Shlomo sometimes called “beyond the beyond” is how a true Mt Sinai Jew is supposed to engage in Torah study. This approach is not reserved for the mystics but is meant for all. The Ishbitzer Rebbe told one of his prize pupils Reb Zodak Hachoen, after the two met for the first time and engaged in Torah study, that “one who studies Torah must feel that he is standing at the foot of Mt Sinai and he is hearing the Torah from the mouth of the all-powerful one.”

The fact , however,is that for most of us a transcendental approach is not the norm in Torah study and so commemorating Mt Sinai annually serves as a yearly reminder on how true Torah study needs to be learned and experienced. The busyness of life with its daily deadlines along with all our practical pressing needs do not allow us to easily enter into such a consciousness most of the time. It is important however to remember that learning Torah is not just about a process of imparting or receiving information, but it must touch and challenge one deeply enough to find a take away from it that can alter or enhance our life.

Radical outside of the box thinking that awakens something deep within us permeates many of Reb Shlomo’s teachings. It figures that on a holiday like Shavuos the spiritual expansiveness with which he taught would require us to broaden our vessels to receive a transcendental all-inclusive consciousness. I want to share a Shavuos teaching of his that I came across a few years ago that illustrates important lessons that I feel, reveals the broadness of his perspective of what the essences of a Mr Sinai Jew truly is.

We will showcase few different Programs this Shavuot.

In the Old City, the Chalonai Rokea Carlebach Miyan of the Old City at 3 Rechov Hamalach has a variety of Programs and Tikkun Leil Shavuot. This Minyan is usually meeting on Chagim and a few Shabbatot when its founder Dr Moshe Moshe Rothkopf is in Jerusalem. Moshe is not only a Soul Doctor but a real Dr, an ophthalmologist practising in Lakewood. Moshe met Shlomo in 1974, played the piano with Shlomo’s band for 20 years and held leadership positions in the Carlebach Shul. There is a story in the New Times about how they bought the House. A short Extract “  The Rothkopfs want to live on two of the upper floors and establish a “multimodality holistic healing center” on the ground floor, “with cubicles for psychologists, body workers, reflexologists, massage therapists and other medical professionals like my husband, to help you cope, to fight your stress,” Mrs. Rothkopf said.”

“We had been looking for two years before we found this one,” said Mrs. Rothkopf, a woman of great enthusiasm who speaks with a slight accent from her native South Korea.

And of course, Reb Shlomo helped Moshe Rothkopf in the conversion process of his wife-to-be Zipporah.Reb Shlomo officiated at Moshe Rothkopf’s wedding at West Side Institutional Synagogue April 4, 1982 together with Rabbis Efraim Buchwald and Meir Fund. The newlyweds celebrated their Sheva Berachot at Reb Shlomo’s Pesach seder on April 7, 1982.

Below is the Flyer of the Shavuot program, Where you can hear a talk by  Also Leah Rothkopf, Advocate speaking on the revelation of the Law. 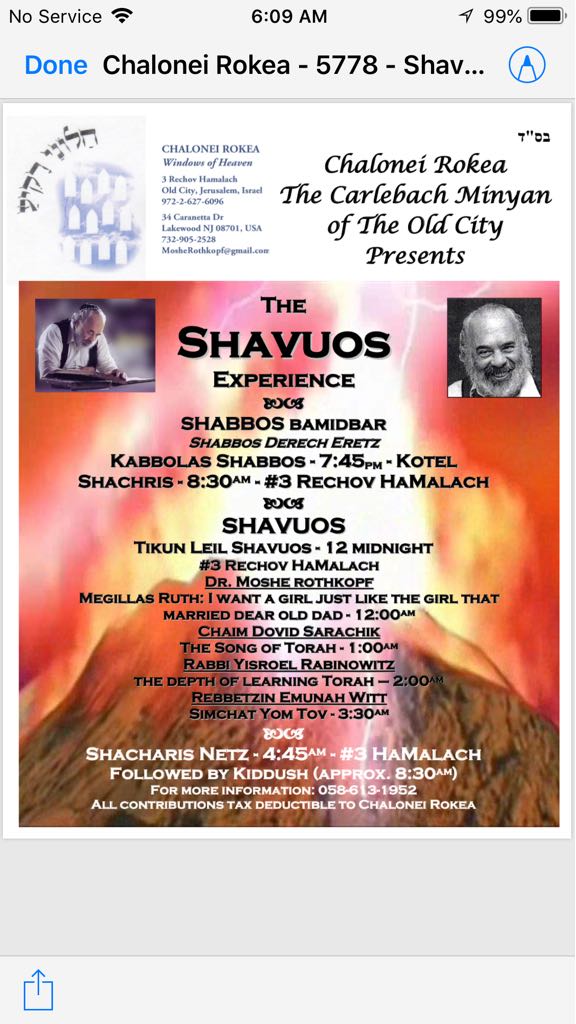 Another Program is at Simchat Shlomo at 18 Gilboa, Nachloat. Flyer below: 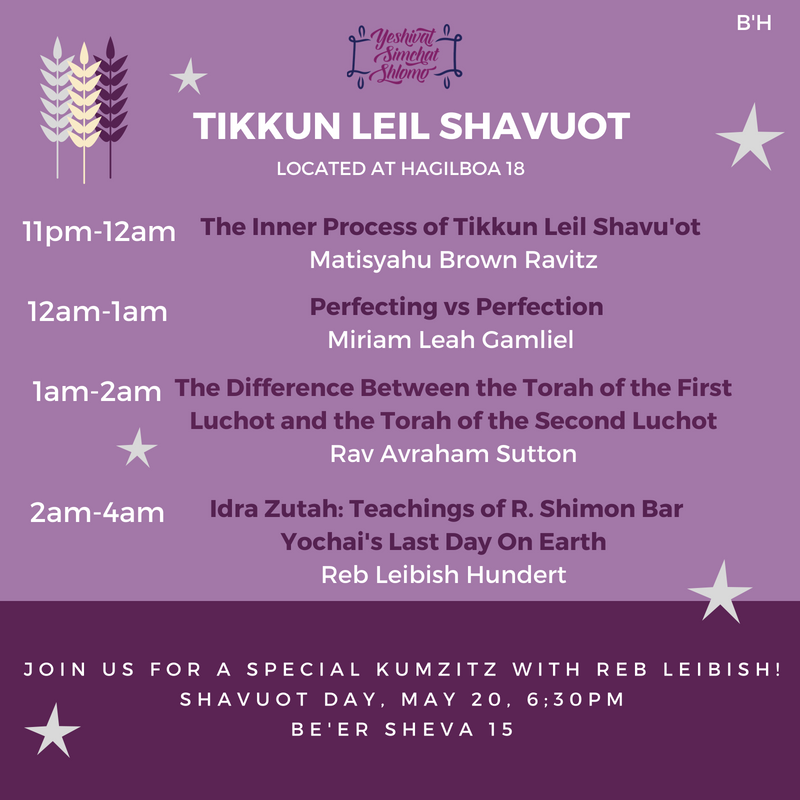 Another Program is at Beit Harav Kook, where they have Carlebach Davening led by Nachman Solomon. 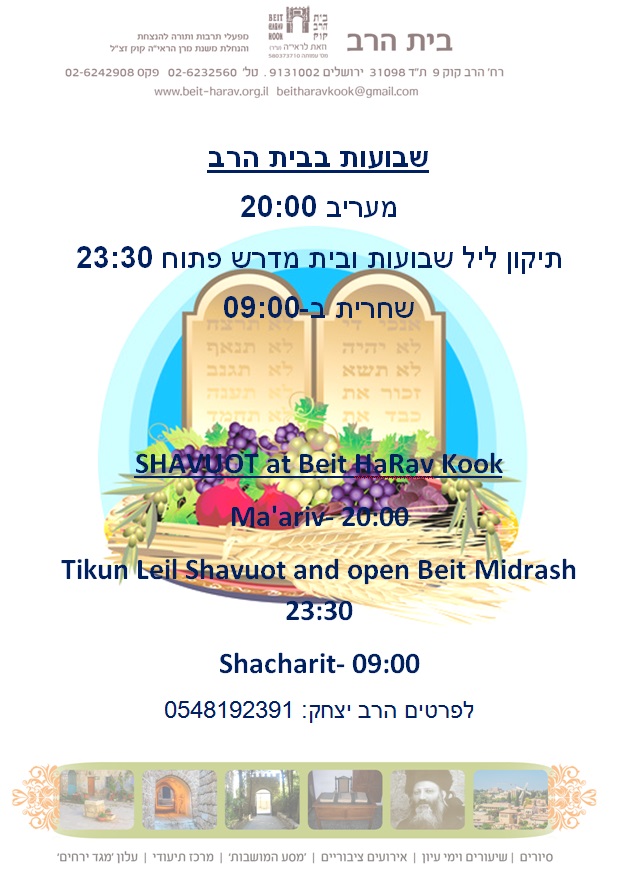 Although, not in Jerusalem here is the poster from the House of Love and Payer in Sefat. 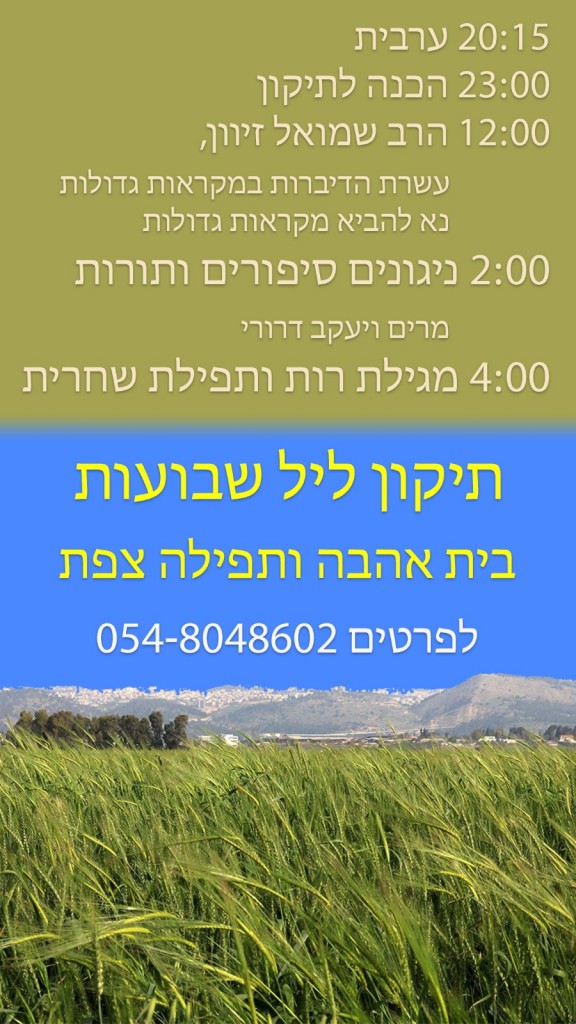 Lastly, The Broadway Show the Soul Doctor is coming to Jerusalem from 7thof June. The Soul Doctor takes us on an odyssey through the triumphs of a cultural phenomenon, – Rabbi Shlomo Carlebach. His music inspired millions of people around the world. 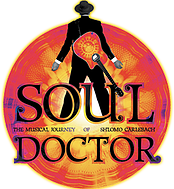 So what was unique about  Reb Shlomo Carlebach? Reb Shlomo was a Gate Opener.

Gates – Shlomo opened many gates, and even now his music, Torahs, teachings and stories are still opening many gates.  Some obvious examples:   bringing in Shabbat with joy, Love of Israel and Jerusalem, love of the Jewish people – the list goes on.  Another is the use of guitars in Jewish services and events which are used across the spectrum of Jewish observance to inspire Jews worldwide.

Music – Shlomo’s music is so much part of mainstream Jewish music that is impossible to identify it.  In fact, when enquiries we made about collecting royalties, his melodies were identified as National Music, as a National Treasure. From Am Yisrael Chai to Holocaust Memorials, from Weddings to Kumsitz – communal singing.

Jewish Education & inspiration – Shlomo opened e new spiritual path that combines Judaism with its spiritual and creative side. As a result, we have three generations of teachers leading this. These soul doctors include environmentalists, artists, and musicians combining their talents with Torah & Jewish mysticism. Other examples include Yeshivat Simchat Shlomo in Jerusalem, The House of Love and Prayer in Safed, or the numerous Carlebach Friday night services which are havens for those seeking a closer connection to God through Judaism.

For further Inspiration, weekly Parsha Blog and  more about the contributions of Reb Shlomo – see www.shlomofriends.com