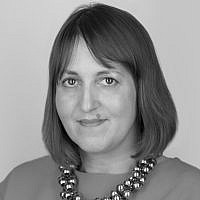 The Blogs
Karen Glaser
Apply for a Blog
Please note that the posts on The Blogs are contributed by third parties. The opinions, facts and any media content in them are presented solely by the authors, and neither The Times of Israel nor its partners assume any responsibility for them. Please contact us in case of abuse. In case of abuse,
Report this post.

“I wouldn’t want my son anywhere near there,” the taxi driver told my daughter.

Leah was en route to a climate change lecture at the London School of Economics (LSE) that her geography teacher had recommended her class attend. But my 16-year-old was lost and had stopped one of London’s famous black cabs to ask for directions. She spotted a Magen David sticker on the cabbie’s dashboard – driving the world’s most iconic taxi is a time-honoured Jewish tradition in the British capital – and she told him was also a member of the tribe. “Hop in and I’ll take you for free,” he said. “But I have to ask — why on earth are you going to that place?”

His question was more than reasonable. A tide of vicious anti-Semitism has been sweeping across Britain’s elite universities in recent years, and the LSE is renowned for being one of the most Jew-hostile campuses of the lot.

“Oh, I wouldn’t do my degree there,” Leah reassured him. “I know how anti-Israel it is. I am just going for a one-off lecture.”

Though he didn’t know it, my daughter’s answer contained two bitter ironies. Leah is passionate about the interface of geography and politics and after graduation plans to work in international development. It is hard to think of a British university that would better prepare her for this than the LSE.

The second irony is even more personal: the LSE is her grandfather’s alma mater. Except that when my dad studied there in the early 60s the left-wing establishment’s attitude towards Israel could not have been more different than it is today. Back then, LSE students and academics viewed Israel as a progressive society surrounded by reactionary Arab states. And back then nine in ten British Jews voted Labour. Today just 13 per cent of UK Jews support Jeremy Corbyn’s Labour Party.

Jeremy Corbyn being the operative words. There is nothing new about British anti-Semitism, but under Corbyn’s watch the Labour Party’s response to this oldest of prejudices has been desultory.

When you consider Corbyn’s career-long support for a worldview that positions Israel as a central evil, you could say this desultory response is not surprising. This is a politician who has said Hamas and Hezbollah are dedicated to peace and justice; who jumped to the defence of blood libeller Raed Salah and the conspiracist Stephen Sizer; who has been a patron of the Palestine Solidarity Campaign which sought to boycott and destroy Israel and which tolerated anti-Semitism; and who, through BDS, supported the exclusion of Israelis, and only Israelis, from the global community.

It is a vile litany of offences, for sure, but I would stop short of calling Corbyn an anti-Semite. Rather, I think Corbyn is a consummate politician who recognises the groundswell of anti-Semitism from his party’s Muslim supporters and who prefers to placate them rather than deal with the problem. Why? Because there are ten times as many Muslims as Jews in the UK. Corbyn is playing an electoral numbers game.

Before the surprise surge of the Labour Party in last year’s UK general election, this placatory attitude was worrying for Britain’s Jews, but not existentially so. But with Brexit now dominating our political debate and the Conservative position increasingly weaker for it, a Corbyn-led government is more likely than ever.

And if Corbyn is our next prime minister British Jews really would be in an existential crisis. His premiership would give Britain’s radical Muslims more licence to go to town on the country’s 284,000 Jews. Scaremongery? The Jewish community already employs guards to protect its schools and community centres. And we are the only ethnic and religious group in Britain to have to do so.

Plus, there is no doubt Jew-hatred is growing in the UK: reports of anti-Semitic incidents hit record levels in the first six months of 2017, a rise of 30% on the same period in the previous year.

At the moment, some of the beleaguered Jews emigrating from France set up home within our shores. If Labour wins the next UK election, they might think again. And British Jews might join them in America and Israel.

Meanwhile, if universities don’t seriously tackle the growing anti-Semitism on Britain’s campuses, my daughter might consider pursuing her university education in Tel Aviv or Jerusalem. I am biased, of course, but I think Israel’s gain would be her mother country’s loss.

About the Author
Karen Glaser is a London-based freelance journalist who writes for national newspapers, consumer magazines and professional journals on a range of subjects.
Related Topics
Related Posts
Comments