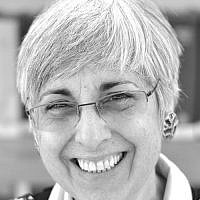 The Blogs
Debbie Goldman Golan
Apply for a Blog
Please note that the posts on The Blogs are contributed by third parties. The opinions, facts and any media content in them are presented solely by the authors, and neither The Times of Israel nor its partners assume any responsibility for them. Please contact us in case of abuse. In case of abuse,
Report this post.

Ever since she began training young people to document the stories of Russian-speaking World War II veterans and “Children of the War” in Negev cities and creating inter-generational encounters, Irena Kudman, director of Atid Bamidbar programs with Russian-speaking Israelis, says that for her, every day is a day of victory over the Nazis and what they represented. A victory of memory over forgetfulness, of spirit, and of choosing life. And a victory over what Russian-speaking Israelis sometimes assume is the indifference of non-Russian-speaking Israelis to their stories. Those stories can widen our perspective of what it means to have freedom, serve as an inspiring example of selflessness and responsibility, and deepen our appreciation of what we have today – a sovereign Jewish state, a family, a home, food on the table. Happily, over the past few years, there is growing recognition of Soviet Jews’ contribution to the Allies’ defeat of Hitler that helped to change history – and affected all of our lives today.

How did it begin? Irena’s grandmother, Sofia (Shlomit) Levin-Kudman, was one of the many unsung Jewish heroines in the Holocaust; if not for her initiative in saving her family, Irena wouldn’t be here today. But it wasn’t only a personal motivation. Ten years ago, Ru’ah Tzei’rah, the mostly-Russian speaking young adult leadership group we facilitated in Netivot was looking for a communal project that would bridge the gap between the Russian-speakers in town and the rest of the population. After training and preparation, the young people began to interview and film Russian-speaking WWII veterans in Netivot. Those stories became three books, 5 film clips and tens of posters – all in both Hebrew and Russian – as well as communal events to publicize the inspiring stories. At first, the project was called “My Neighbor is a Hero”, to help Netivot residents realize that the old man on the bus or the white-haired lady in the supermarket were actually WWII heroes and heroines – and to connect more easily to the high school pupils we began to work with. We found that the theme of Jewish heroism resonated with the young people: the emphasis not on what others did to the Jews, but what the Jews did for themselves and their families, their people and their country, in battle but also in daily life. Over the years, with the support of Yad Vashem, Genesis Philanthropy Group, Help Jews Home and EVZ and additional partners, the project expanded to other Negev cities – and to date Irena has worked in 10 schools and 5 youth movements with many, many hundreds of pupils, students, teachers, and “Children of the War”; more than 300 stories have been documented. 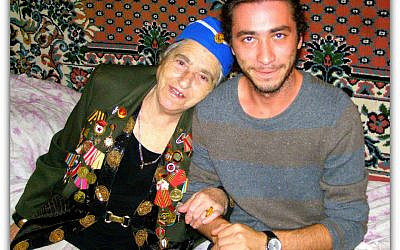 “Children of the War” was chosen as the project’s name because most of the heroes of these stories experienced their childhood and youth during the long, terrible years of the Second World War. As teenagers, some of them suddenly found themselves responsible – alone – for their family and younger siblings. Some of them ran away from their homes at age 15 or 16 to join the Red Army and fight on the Front; others joined the partisans or the anti-Nazi underground; still others escaped from Nazi bombardments, labored in munitions factories and other industries, or wandered across the expanses of the USSR. Their heroism expressed itself in diverse ways: leading an army division against the enemy, continuing to fight even when wounded in battle, crawling among corpses of enemy soldiers to look for medicines and foodstuffs – but also clinging to life despite hunger and suffering, sharing their own food with others, and making fateful decisions in impossible situations. Despite the traumatic years they lived through, they found the strength after the end of the War to study, to work, to build a family, and raise children and grandchildren. Then, they made a courageous and difficult decision to leave behind everything familiar and all that they had built, and immigrate to Israel, out of a desire to build their homes anew in the homeland of the Jewish people.

In Israel, the Holocaust is usually identified with Poland, and that is where most if not all of the high school study-trips visit. But more than 3 million of the 6 million that the Jewish people lost, were from the territories of the Soviet Union. Another aspect all too often overlooked in Holocaust studies or discussion are the more than 1.5 million Jewish men and women who fought in the Allied forces; of these 501,000 Jews served in the Red Army, including 167,000 officers and 334,000 soldiers, sailors, pilots and non-commissioned officers. The overwhelming majority of the Jewish soldiers served in active military roles. According to Dr Yitzhak Arad, between 120,000-180,000 Jews were killed in battle, and another 80,000 died or were murdered in Prisoner of War camps. Another estimated 30,000 fought with the partisans or in anti-Nazi undergrounds.

Vitaliy Klebanov, WWII veteran, a pilot in the Red Army, Beer Sheva, May 2020

According to official Soviet data published in 1946, 123,822 Jews were given awards for bravery, ranking fourth (with the Tatars) after Russians, Ukrainians and Belarussians; this, even though Jews ranked only 11th relative to their proportion in the population. Many scholars estimate that the number of Jews receiving awards probably would have been higher, if the Soviet army had been more willing to give public credit to Jewish heroes.

When the COVID-19 crisis erupted, elderly WWII veterans and Children of the War were suddenly cut off from their social and cultural milieu – Russian-speaking cultural clubs, Golden Age Centers, etc. – and isolated at home. While municipalities and NGOs provided essential food and medicine, Irena identified other needs, essential to psychological wellbeing: hunger for a sense of belonging to Israeli society and for cultural and intellectual fare – including tips on building a daily schedule, keeping a positive perspective – to enrich the long hours of enforced solitude, and combat fear and uncertainty. Irena created the “Anti-Virus” project to meet those needs, opening a Facebook page in Russian and Hebrew: https://www.facebook.com/Israelwetogether.

Working with over 360 volunteers, and leveraging partnerships with tens of institutions in 22 Israeli localities from Nahariya to Mitzpe Ramon, Irena connected 60 young people to 300 older folks by regular telephone calls, helped youth and young adults to produce tens of film clips of songs, dances or reassuring messages for the latter, and disseminated the film clips and audio and video lectures on Jewish and Israeli themes, to thousands of Russian-speaking Israelis. We welcome additional individuals and organizations to partner with us in the “Anti-Virus” and “Children of the War” projects! 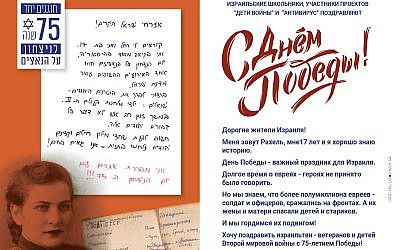 Victory Day greeting by 17-year-old Rachel to the Russian-speaking WWII veterans, in Hebrew and in Russian, emphasizing the importance of the day and their heroism.

May 9th 2020, the 75th anniversary of the victory over the Nazis, was different from any Victory Day previously – there were no marches, no large public ceremonies – but Irena found ways to make it meaningful for the WWII veterans and for youth and young adults she worked with. Even without participating in big communal events, we can all listen to the stories, watch the films, learn the history, and think about what this date means for the Jewish people – and for the world. It is the least we can do for those heroes and heroines still with us, and for those who have passed on: to remember what they did and tell their stories to the next generation. This is expressed succinctly in Psalms (78: 6), in a verse we chose as the motto of the Children of the War project: “So that all the generations till the last shall know, the children who will be born shall arise and tell their children.” 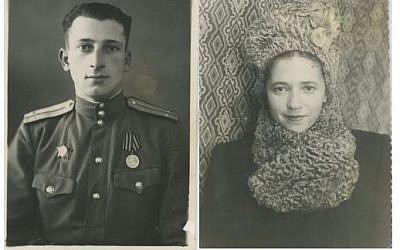 Alexander Tarnopolsky as a soldier in the Red Army, and his wife Frida in her youth. 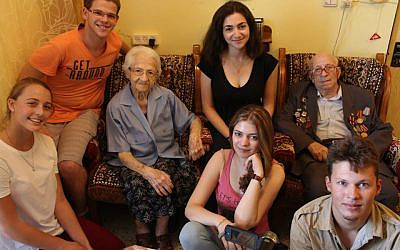 Participants in the “Children of the War” project with Alexander and Frida Tarnopolsky, Beer Sheva.

Then perhaps, not only for Irena, but for all of us, Victory Day will not be just a once-a-year mark in the calendar, but a daily mission, a commitment to making a better world and giving those who fought for freedom and against fascism, and chose life again and again, the appreciation that they are due.

About the Author
USA-born Deborah Goldman Golan made aliyah in 1972 and moved to Yeroham in 1987. She is co-founder & president of Atid Bamidbar non-profit association (www.bamidbar.org). Debbie is a social/cultural entrepreneur and educator committed to "tikkun olam", religious pluralism, inter-cultural dialogue, bridging gaps in Israeli society, and engaging Israeli and Diaspora Jews with each other.
Related Topics
Related Posts
Comments