We’re getting ready for the High Holy Days. The pomegranates are ripening on the trees in Israel. The first real clouds are appearing in Jerusalem’s skies. There’s a change in the air. It’s the time when we reflect on our dirty habits, dig through our garbage, and make amends. Next, we pray to live for another year. After that, we drink a sip of wine in a tiny plastic cup. That’s the tradition.

We are taught that the world was created on Rosh Hashanah. In that sense, it’s the world’s birthday.  But instead of bringing gifts to the party, we are doing the equivalent of dumping trash in the yard, destroying the party food and then burning down the house.

The news is full of threats —  how anti-Semitic BDS is and how it seeks the destruction of Israel, whether Iran will act on its daily threats – and in the meantime, Israel continues to destroy itself, one plastic cup at a time.  Israelis continue to throw away an astounding 560 kg of trash a year, per person. We ask our citizens to go to the army and defend us. For what? To be a free people in a filthy land? 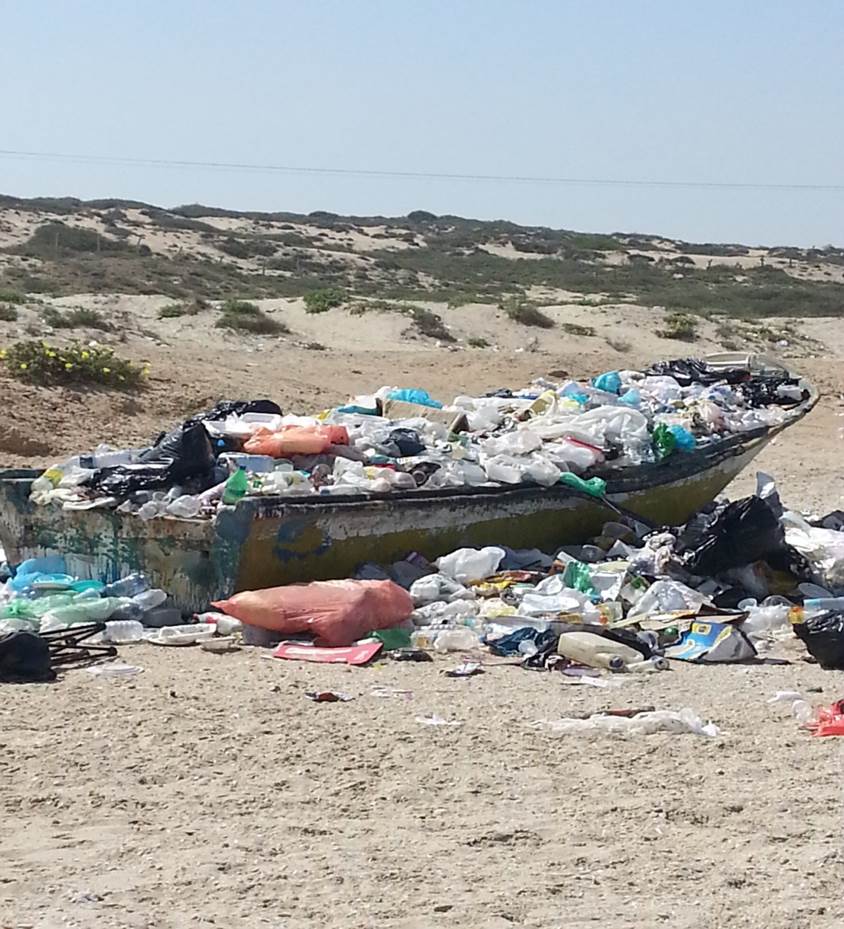 Everything I can identify in this dumpster is plastic, paper or metal. Imagine if the principles of Refuse, Reduce, Reuse, Recycle (RRRR) had been applied here. It’d be pretty empty.

What can we do? For a start, stop buying water. It’s broadly regarded as one of the destructive industries. See why here:  banthebottle Still want bubbles? Get a Sodastream. Take shopping bags.That’s the first R – refuse.

Use both sides of a page. Use your washing machine only when it’s full. Get a composter. (In Jerusalem, the cheapest is here: Jerusalem municipal composters) That’s Reduce.

Get a water bottle that you can reuse. Yes, that’s Reuse.

And then as a last resort, Recycle. It is the least good option but most people don’t even do that.

I know. I pick up plastic bottles in the street, sometimes even from the tops of dumpsters. I’m like the cat lady but with bottles.  It’s got to the point where I’m embarrassing even to myself. But what can I do? It drives me crazy that people don’t recycle and I figure better the embarrassment than the landfill. (My record is 36 on one walk.)

There is tremendous institutional support for this. There are now municipal recycling bins for plastic and for paper within a few minutes of every house. You can recycle all your plastic in those very same bins. Humus containers, shampoo bottles, those plastic, dinky baskets your fruit comes in, juice cartons? Yep. Uh-huh. Totally. Open the door to your fridge, bathroom cabinet or kid’s room and if it’s plastic, the answer’s yes.

It’s never been easier.  Many neighborhoods also have recycling centers metal and broken machines, textile, batteries and sometimes old cds as well. What they don’t have are signs directing you to them. Look for the closest one to you here:  Greenmap

And for what you can’t RRRR, dispose of responsibly. Take old medications to a health fund office or a pharmacy for safe disposal and batteries to a library/school/any government office or end up drinking melted them in your ground water.

There are a thousand ways you can make your new year one that is kinder to the earth. In short, stop looking at pictures of polar bears on melting ice caps; make a difference in your household habits instead.

And when you raise your plastic cup at shul for the Rosh Hashanah Kiddush, celebrating the birthday of the world, don’t throw it away. There is no “away”.  Recycle it and come join the party. The earth will say, “Thank you, it’s what I’ve always wanted.”