The Blogs
Nathan Bigman
Apply for a Blog
Advertisement
Please note that the posts on The Blogs are contributed by third parties. The opinions, facts and any media content in them are presented solely by the authors, and neither The Times of Israel nor its partners assume any responsibility for them. Please contact us in case of abuse. In case of abuse,
Report this post. 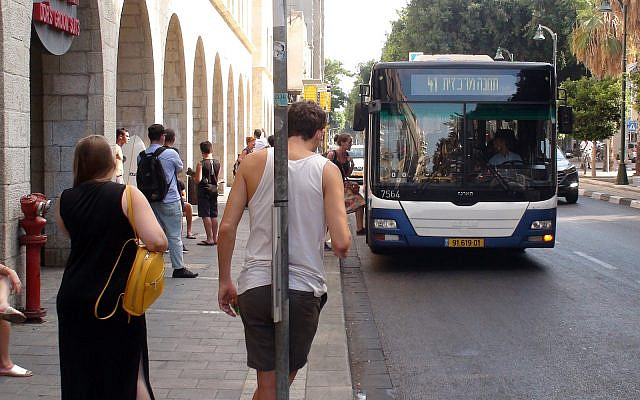 I know a secular Jew who has a lot to say about public transportation on Shabbat. To be fair, I don’t just casually know this secular Jew, I helped conceive him. He was actually secular at birth, then was religious for a while, then reverted back to his natural state. By that I mean he became secular, not a nudist.

Bear with me as I continue to spin around and yodel to avoid telling you what he said, even though the whole point of this is to tell you what he said. We were eating schnitzel in one of those restaurants with a real kashrut certificate, not that Rabbanut garbage. I remarked on the amazing effort by the city of Tel Aviv to provide bike paths, and he said, “As long as there’s no public transportation on Shabbat, people will own cars, and when they own cars, they’ll drive them. And I’m thinking about becoming a nudist.”

The non-nudist progeny pointed out that while we’re pretending to be in the First World of public transportation and carbon emissions, we’re entirely Third World for 24 hours (15%) of the week. And people who own cars so they can travel on Shabbat will also drive them during the week.

Why oh why do we insist on forcing people to keep Shabbat? So that a quarter of us can have peace and quiet? To please God by convincing the secular that the religious are all sh_ts? All we accomplish is destruction of the environment, and animosity toward Shabbat and its enforcers.

I like Shabbat. You like Shabbat? Keep Shabbat. You like it so much that you want to share it with others? Share it with others. Let them know how relaxing and beautiful it is to shut the phone and the TV for a day. You can even point out that a family day without motorized transportation can be beautiful. Ramming it down their throats accomplishes nothing positive, and is destructive to the natural environment – and to the social environment.