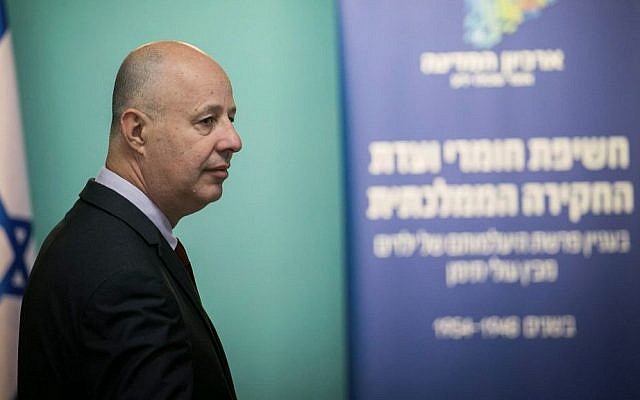 Minister of Regional Cooperation Tzachi Hanegbi seen at a press conference exposing the State archive on the "Yemenite Children Affair", now open to the public online, at the Prime Minister's Office in Jerusalem on December 28, 2016. (Ohad Zwigenberg/Pool)

Recently, Prime Minister Netanyahu asked you to represent the government of Israel in implementing an agreement that will finally allow all Jews to pray in the manner in which they are accustomed at the Western Wall.  This appointment gives me hope: if anyone can get this critical job done, it is you.

It is not a coincidence that he picked you for this historic task – a task that even a national hero like Natan Sharansky did not succeed in completing.    For those of us in the Israeli public who have watched your political career over the years (and even had the pleasure of working with you), it is clear that you are the best person to take on this challenge: Born into one of the country’s most esteemed political families, nobody has a better understanding of local political dynamics. No one has a better sense of the art of the possible. And as someone married to a member of the great American-Israeli community, you, unlike most of the cabinet, understand what’s at stake.

You understand that the American Jewish community is slowly but surely losing its sense of solidarity with Israel. The vast majority of American Jews are increasingly outraged by the government of the Jewish state and its agents that delegitimizes their faith, their religious leadership, their conversions and their convictions.  It’s not just obtuse Orthodox politicians who announce from the Knesset rostrum that Reform and Conservative Judaism is not Jewish.  It’s official government policy. And it’s wrong.

Nowhere is the insult greater than at the Western Wall – the very heart of Jerusalem – to which all Jews from around the world pray.   Far from being liberated in 1967, the Western Wall today remains as unwelcoming and inaccessible a place for most of the world’s Jews, those of us who are not Orthodox, as it was when it was when ruled by a hostile Jordanian government.  Anyone who sees the abuse heaped each month onto the intrepid Women of the Wall knows that recent expressions of Anti-Semitism in the U.S. pale alongside the litany of insults, physical abuse and mean-spirited harassment heaped on these women and the men who support them. And all we want to do is pray as Jews.

Most outrageous is the way the Israeli police simply sits by passively and watches.  If there is any involvement or even an arrest, it is usually is directed at a woman who has the temerity to put on tefillin or read from a Torah.  The violent, Haredi youth who spits or curses or blares a whistle in her ears so she can’t pray gets a wink.  As an Israeli citizen, I am ashamed. I know you feel the same way.

The irony is that Israel’s government, the same one you sit in, resolved to set things right. It voted to adopt a pluralistic, respectful and reasonable compromise.  The cabinet’s decision from January 31st, 2016 is quite clear: A single entrance to the Western Wall compound. Those who prefer a mixed area of prayer will turn right and enjoy an upgraded venue near Robinson’s Arch.  Those men and women who wish to pray separately can go to the left and pursue their beliefs in the old Kotel plaza.

A single Council is to be appointed that offers representation to all major streams of Judaism in overseeing the complex, putting an end to the present, ultra-Orthodox monopoly.  A budget to ensure religious services in the egalitarian section would be available to ensure that experience of visitors be more edifying and inspirational.   It’s a policy which is consistent with the promise of the national anthem to offer a place where Jews can be a free nation in their own land.  It’s a policy that embraces the legitimacy of different religious views and celebrates the entire colorful mosaic that is the Jewish people.

The vote in the Cabinet was 15 in favor and 5 opposed.  We should have seen this decision executed over a year ago. It represents the desires of the vast majority of Jews around the world and most Israeli citizens.  But then a small faction of ultra-Orthodox, non-Zionist extremists became unhappy, made some noise and stymied implementation.  In an extreme display of brazen, anti-Democratic sabotage, they brought the government to its knees.  The government’s cowardice sent a message to the Jewish communities of the world. It told them that political expediency is more important to Israel’s elected leadership than the unity of the Jewish people or ensuring religious rights for all Jews in their homeland.

And so it was last Sunday, when Jews came out to celebrate the new month of Adar – the happiest month of the year.   Those who were not ultra-Orthodox suffered some of the ugliest abuse at their holiest sites in recent memory.  The Rabbi paid by the government, whose job it is to ensure the holiness of the Wall – set up loud speakers to drown out the prayers of the Women of the Wall.  Those who simply want to pray at their country’s holiest site once again faced persecution and harassment.  These shameful scenes repeat themselves time and again.  They demand a bold and determined intervention.

And so I turn to you Tzachi on behalf of millions of Conservative, Reform, Reconstructionist or simply non-Orthodox Jews. This is a historic moment.  Don’t let us down. Don’t blink;  Most of all – please don’t think about short-term coalition exigencies. Do the right thing. There is so much more at stake here. Decency and righteousness is on your side.  Make the Western a place which welcomes all Jews.  Ensure the right for all the people of Israel to pray in their ancient capital and age-old spiritual center with the protection and blessing of the Jewish State.