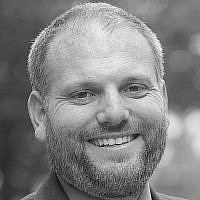 The Blogs
William Daroff
Apply for a Blog
Please note that the posts on The Blogs are contributed by third parties. The opinions, facts and any media content in them are presented solely by the authors, and neither The Times of Israel nor its partners assume any responsibility for them. Please contact us in case of abuse. In case of abuse,
Report this post.

Anytime the Jewish community focuses on the issue of becoming more inclusive and engaging new people in Jewish life, I reflect on the way in which we, as Jews, are taught to value the protection of the most vulnerable among us. “You shall not insult the deaf,” reads Leviticus, “or place a stumbling block before the blind.” In Judaism, we understand this to mean that we must actively remove the stumbling block, actively work to uphold those who need upholding.

This week at the General Assembly in Israel, The Jewish Federations of North America will once again address the importance of disability inclusion. I will moderate a session which will explore the moral mandate inherent in Judaism to promote disability inclusion, and will compare the progress and challenges in North American and Israeli communities towards achieving it.

JFNA has fought tirelessly to protect the most vulnerable populations in our communities and to advocate for people with disabilities to promote their full inclusion into society and specifically to promote their inclusion into Jewish life. As a result of JFNA’s Disability Inclusion Initiative following the 2012 General Assembly in Baltimore, communities across North America are forming inclusion task forces and engaging key community leaders to develop plans for ensuring all institutions and organizations become more inclusive through their programming and through their mindsets.

Earlier this year, we announced a special partnership with the Ruderman Family Foundation that helps federations to promote inclusion through a matching grant program that will create employment opportunities for people with disabilities. We are proud to have been chosen to implement this exciting program and believe it will serve as a model program for fostering independence and inclusion.

And yet, we feel these efforts are not enough. To truly be inclusive and welcoming of all, we must get at the root causes of discrimination and exclusion in our society and our community. To that end, JFNA continues to pursue legislative outcomes meant to change the rules of the game and create a level playing field for individuals with disabilities.

The Achieving a Better Life Experience (ABLE) Act remains a promising vehicle for allowing families to plan for their children with disabilities to have access to funds to pay rent, hire tutors or get job-related training in the future. In the Senate, the ratification of the Convention on the Rights of Persons with Disabilities would help ensure millions of people with disabilities around the world have basic rights, open markets to American business abroad and reassert the United States as a global leader on disability rights. JFNA has worked hand in hand with the Jewish community to ensure support in the House and Senate for these important measures which will promote, protect, and ensure the rights of all who have disabilities.

JFNA also works in coalition with other Jewish and faith-based organizations to promote these important initiatives. JFNA co-chairs the Jewish Disability Network, a coalition of 25 national Jewish organizations focused on disability policy issues, and sits on the Steering Committee of the Interfaith Disability Advocacy Coalition, the interfaith network led by the American Association of People with Disabilities.

We do all of this because we believe in the importance of an inclusive Jewish community, and that it is our responsibility to ensure people with disabilities are included when making important decisions about everyday Jewish life and our Jewish future. We envision a time when inclusion is synonymous with Jewish life, and until that time, we will keep working to make it so.

About the Author
William Daroff, Senior Vice President for Public Policy and Director of the Washington Office of The Jewish Federations of North America, was named by the Forward Newspaper as being among the fifty most influential Jews in America. As the chief lobbyist and principal spokesperson on public policy and international affairs for the 153 Jewish Federations and more than 300 independent communities represented by JFNA, Daroff ensures that the voice of Jewish Federations is a prominent force in the Nation's Capitol. Daroff guides the Jewish community’s advocacy efforts on the Federation movement’s key domestic policy issues, principally on health and human services, such as Medicare and Medicaid, long-term care, and policies affecting older Americans, as well as homeland security programs and strengthening the capacity of charities to care for those in need. In addition to his focus on domestic policy, Daroff is a key player in foreign policy circles – advising policy-makers and elected officials on Jewish communal concerns, principally those related to the US-Israel relationship, the Middle East conflict, and efforts to prevent Iran from developing a nuclear capacity. He is also a leader in the worldwide fight to combat the assault on Israel’s legitimacy, acting as a key steward of the Federation movement's Israel Action Network, and serving on both the steering committee of the Prime Minister of Israel’s global task force and the Conference of Presidents of Major American Jewish Organization’s working group. Daroff is also a social networking pioneer and evangelist. He has twice been named by JTA as being among the top five most influential Jewish Twitterers in the world, and was named by the National Jewish Outreach Program as one of the top ten Jewish influencers in social media. Follow him at www.Twitter.com/Daroff. Daroff received his Bachelor Degree (summa cum laude) in Political Science & History, Masters Degree in Political Science, and Juris Doctorate from Case Western Reserve University in Cleveland. He lives in suburban Washington, DC, with his wife, Heidi Krizer Daroff, and their two children. The couple met in Krakow, Poland, while studying at Jagiellonian University, from which they both received certificates in the history of Eastern European Jewry and the Holocaust.
Related Topics
Related Posts
Comments