This past Tuesday, Jews worldwide commemorated 23 years since the passing of the Lubavitcher Rebbe, Rabbi Menachem M. Schneerson, of blessed memory.

The Rebbe was, and remains, one of our history’s greatest leaders, who changed the lives of millions of people worldwide, with his abundant wellspring of wisdom, his unconditional love for each and all, his incessant drive to better our world every single day, and above all, his creation of his unparalleled network of Jewish communities around the globe, even in the most remote places.

To encapsulate the Rebbe’s persona and his lasting influence is an impossible task. But here is a humble attempt to provide a glimpse into four of the Rebbe’s ever-relevant teachings on life and living:

1. NO SUCH THING AS “STUCK”
In the winter of 1967, a group of young ladies called the Lubavitcher Rebbe to ask him for a blessing. They were “stuck” at the Detroit Airport, on a Friday afternoon, and their flight home to New York had been canceled.

They spoke briefly with the Rebbe’s secretary, and after putting them on hold for a short while, he returned with a reply from the Rebbe: “The Rebbe doesn’t understand the word ‘stuck.’”

They tried to explain to him what the term “stuck” means, but the secretary interrupted them, saying: “The Rebbe knows what ‘stuck’ means. But the Rebbe says that a person is never stuck.”

They understood the Rebbe’s wise advice, and they rose to the occasion. Shortly thereafter, they ran around the airport, smiling at strangers, lending their support, and igniting souls with the light of Judaism.

The Rebbe’s words to this young group, are left ringing in our ears. Indeed, there is no such thing as ‘stuck.’ Every moment has a Divine call. Every place has a holy purpose. Every person has a vital role to play. 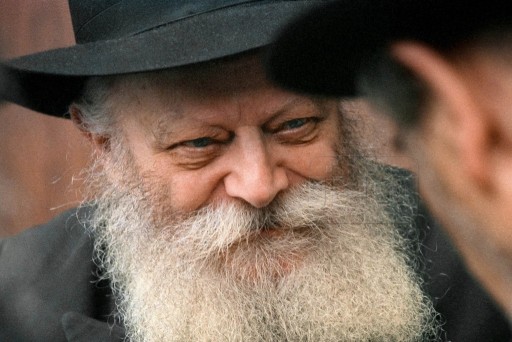 “I have nothing to be thankful for,” a young lady once wrote to the Rebbe.

In his moving reply, the Rebbe responded by contrasting the lives of two distinct individuals: Adam, the father of humanity, and a Jew who was forcefully sent to a Nazi concentration camp during the Holocaust (- see Igrot Kodesh, volume 20, page 41).

Adam resided with his wife, Eve, in Paradise, and their lives were overflowing with God’s blessings. But then, God appeared to Adam, and told him: ‘From every tree of the garden you may eat freely, but of the tree of the knowledge of good and evil you shall not eat.’ This small prohibition filled Adam’s life with misery, and his spirit was quickly overcome with malaise and dissatisfaction.

“Contrast Adam,” the Rebbe wrote, “with a Jew in a Nazi concentration camp whose life was turned into a living hell. Yet, every morning, he found the courage to utter the prayer “Modeh Ani,” and express his sincere ‘thank you’ to the ‘living and eternal King of our universe.’”

3. HOW TO DEAL WITH CHALLENGES
The year was 1974. Israel was just beginning to recover from the devastating Yom Kippur war in which close to 3,000 Israelis were killed, and over 9,000 were wounded. The then Chief Rabbi of North Tel Aviv, Rabbi Yisrael Meir Lau, had journeyed to New York to visit the late Lubavitcher Rebbe and seek his advice.

During the course of their conversation, the Rebbe asked Rabbi Lau what was the mood “in the streets of Israel,” after having faced such a challenging war. Rabbi Lau responded that people are asking, “What will be?”

Upon hearing these words, the Rebbe grabbed Rabbi Lau’s arm and passionately replied, “Jews don’t ask: ‘What will be?’ Jews ask: ‘What are we going to do?’

How true. “What will be?” is the question of the passive and visionless being, roaming through life without a direction of purpose and meaning.

But “what are we going to do?” is the question of true leaders and difference-makers, who rise from the challenges of the past and the present, to march forward and upward into the opportunities of the future, with unending deeds of goodness and kindness.

4. EVERY PERSON COUNTS
In 1983, a 4-year old child living in Toulouse, France, was diagnosed with a mysterious genetic disease. The hearts of his parents flooded with anguish. In despair, they turned to the Lubavitcher Rebbe to ask for a blessing for their son.

Sure enough, the boy’s condition stabilized, and today, this boy lives in Scottsdale, Arizona, healthily, and happily married, with many beautiful children.

What moves me most about my personal story, is that the Rebbe never forgot me. Several months had elapsed since my parents had initially asked the Rebbe for a blessing, but he still remembered me and my condition, and he reassured my parents: “I already promised you that I will pray.” In other words: “Don’t worry. I haven’t forgotten your son. He continues to be in my prayers.”

This personal story speaks to the exceptional leader the Rebbe was to us, to the Jewish people, and to humanity. He may have been a man of the world, whose advice was sought by presidents of nations and chairmen of corporations. But the Rebbe never forgot the lonely cry of a single child.

We live in a broken world. Many face daunting challenges. Others, carry deep ache and hurt. As we commemorate the Rebbe’s passing, may we learn from the Rebbe’s shining model and from his eternal teachings.

In the Rebbe’s honor, may we fulfill our purpose, at all times, without ever feeling “stuck.”

May we thank God for His eternal blessings, without reserve.

May we rise above our challenges, and increase our deeds of goodness, without inhibition.

And may we care for one another, even for the smallest of children, without reservation.