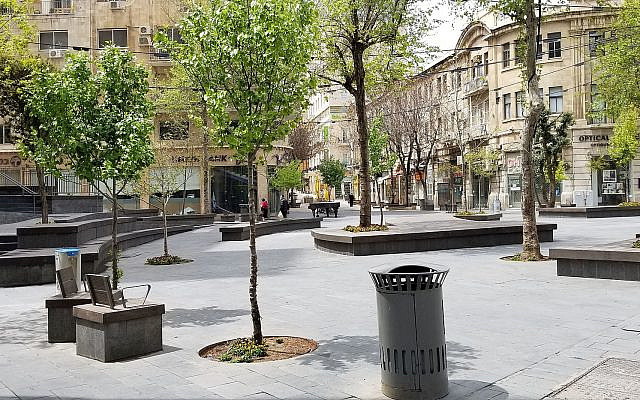 Downtown Jerusalem during the Coronavirus pandemic

Not too long ago, I wrote a post about what it was like to cope with the Coronavirus crisis in Israel during Passover. Now that Passover is over, we in Israel—and the rest of the world—are wondering if we have passed “the peak” of the crisis and are emerging from darkness to light, from the slavery of quarantine to the “promised land” of freedom of movement, partially or totally. At this point, it is fair to say that there are no clear answers yet; rather, we have lots of questions, with few definitive answers.

Our first major question here is: do we have responsible leadership? It appears that the answer to this basic question is mixed. On the one hand, Netanyahu and his compatriots—especially the Director-General of the Ministry of Health—seem to have steered us through the last month without a major disaster. We have had much fewer hospitalizations and deaths than were originally predicted, and we now have ten times the amount of ventilators than what is needed at the moment. On the other hand, parallel to the coronavirus crisis, we had the ongoing and sickening crisis of the coalition negotiations between Likud (Netanyahu) and Blue and White (Gantz).

During this period, the public has been getting sick and tired of Bibi’s political tricks again, which are self-serving in a very transparent way, namely, the attempt to prevent  his trial on major corruption charges from moving forward. Bibi’s leadership in this area has been cynical and surreptitious, while Beni Gantz’s leadership has been weak and ineffective. The bottom line is that the Israeli public is once again losing faith in its political leadership, since they seem to be more interested in coalition politics than in actually dealing with our national emergency. Even though the negotiations have finally succeeded in bringing about an agreement to have a “unity” and “emergency”  government,  the irony is that it will be the most bloated and expensive government in our history, totally in contrast with the enormous economic exigencies that need to be dealt with efficiently and effectively as a result of the corona crisis.

Our second question is: what will be the “new normal”? Especially for people like me who are called “veteran citizens” in this country? Will we ever be able to leave our homes? To travel again? To visit friends and loved ones? The apparent answer is: no one has the faintest idea yet! The main reason appears to be that there is no real rational scientific plan, which would be based on accurate information garnered from massive testing. Why this massive testing is not happening here (or in the USA) is a complete mystery and totally defies logic. According to what I hear and read, there is no hope for a real plan without this. So why isn’t it being done in a big way already?

Third question: will the economy recover and when? Again, no one really knows, but the outlook looks bleak. More than a million people are unemployed here, out of nine million citizens. There is growing fear that the government does not really have a plan to rebuild the economy, especially since this is a global economic crisis, not just an Israeli one. And there is a big debate going on between the public health experts and the economists as to the best “exit strategy” without a consensus as yet as what are the best policies to adapt and follow.

Fourth (in the spirit of the Passover Hagaddah, we have four questions again), what is the role of religion and our religious “leaders” in helping us deal with the crisis in values that has resulted from the coronavirus pandemic? Our national “religious leaders” in Israel are mostly useless in this regard. Unfortunately, they—our “Chief Rabbis” and the leaders of the so-called “religious” political parties, including one man who pretends to be the Minister of Health–  appear to be much more interested in rituals and prayer (which got so many of them sick with the virus and infected others) than in ethical actions and deeds of lovingkindness. Yet, much hope and consolation is being found among liberal religious leaders in Israel, who are conducting all kinds of meaningful activities in their synagogues and cultural institutions every day.

For example, last Friday night, I joined the zoom Kabbalat Shabbat Service, which took place on Friday afternoon, during the hour before the Sabbath actually began in Israel, which was co-sponsored by Rabbi Beni Lau’s “929” organization (which has been teaching the Bible to people all over Israel and the Jewish world for the last several years), and Kehilat Zion, a liberal Masorati (traditional) synagogue, led by Rabbi Tamar Elad Applebaum. It was an hour of spiritual singing and meditation, which offered some consolation and a great deal of human solidarity, which is so necessary in these difficult anxiety-filled times. Kehilat Zion—as well as other synagogues around the country—are offering adult education study groups, and engaging in community activism by reaching out to groups in need, such as the elderly, asylum seekers, and the poor, who are all struggling physically, psychologically and spiritually during this period of so many unknowns, fears and unanswered questions.

In addition, the Tag Meir (Light Tag) Forum–which is an umbrella organization, comprised of tens of Jewish groups within Israel, as well as Muslim and Christian Palestinian Arab partners– is continuing to promote good relations between Jewish Israelis and Palestinian Arabs during this pandemic, both inside Israel and within the Occupied Territories. Zoom calls that offer human solidarity and empathy have taken place in recent weeks, and more are planned in advance of Ramadan. Moreover, the Tag Meir Facebook page has repeatedly highlighted the wonderful cooperation between Arab and Jewish health professionals throughout Israel, which is a sign of hope in these troubled times. These actions remind people, especially Palestinian Arabs, that Judaism is about kindness, empathy and justice, rather than violence, oppression and occupation. The thousands of people and tens of groups throughout Israel act in the tradition of Aaron the Peacemaker, who according to the Ethics of the Fathers was the original peacebuilder:

Be of the disciples of Aaron: one who loves peace, pursues peace, loves God’s creatures and draws them close to Torah. (Ethics of the Fathers 1:12)