Sitting in his small hotel room in Basel, Switzerland, a tired journalist from Vienna famously wrote: “In Basel, I founded the Jewish State. If I said this out loud today, l would be greeted by universal laughter. In five years perhaps, and certainly, in fifty years, everyone will perceive it.” The journalist’s name was Theodor Herzl. He wrote those words in September 1897. Fifty years later, November 1947, the United Nations voted to recognize a Jewish state in the land of Israel. “If you wish it, it is not a dream”, said Herzl, and he was right. It is time we begin dreaming of Jewish education that is free to all. If we wish it, it is not a dream. We must reach the point where Jewish schools do not ask parents for payments. It can be done. The money to do it is there. Here is how we do it:

Philanthropy: In a recent article in e-Jewish Philanthropy Mike Leven, on of the Jewish people’s greatest philanthropists writes:

“Over the next 25 years, $68 trillion will transfer from our generation to the next, with an estimated $6.3 trillion allocated to charity. Of that sum, we estimate that 20% of this allocation, or $1.26 trillion, will be given by Jewish donors. If our dream is realized, there will be over $600 billion on the table to secure the Jewish future.”

That comes out to about 24 billion dollars a year in American Jewish philanthropy.

The current combined cost of all Jewish day schools in America? Just over two billion dollars a year. Let us assume that once Jewish education is free, the number of students doubles (which is the best argument for prioritizing Jewish education), we are talking about 4-5 billion dollars a year. With an average of 24 billion dollars of Jewish philanthropy given every year in America, the real question we need to ask is why this has not happened yet? Furthermore, even if we made no assumptions about Jewish philanthropy, if every single Jew in America gave just $500 a year (!) then every single Jewish child in America who wanted a Jewish education would have it—tuition-free! If you wish it, it is not a dream. 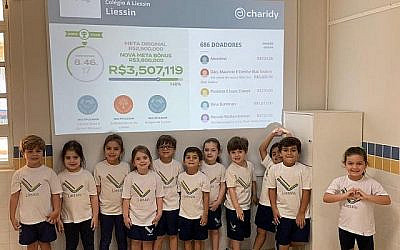 Students at the Liessin day school in Rio de Janeiro, Brazil, during a fundraising drive in October 2018. (Courtesy of Liessin via JTA)

Government funding– Jewish philanthropy or communal resources are not the only paths to tuition-free day schools. The recent supreme court decision (Espinoza Vs. Montana) opens the door for state and federal funding for private schools. With the proper communal mobilization in different states and throughout the United States, the Jewish community can make sure that every city, state, and federal elected official knows education is our top priority. The breathtaking success Maury Litwack and his Teach NYS coalition have had in securing tens of millions of dollars in government funding for everything from STEM education, security, laptops, and services for children with special needs exemplifies this is possible. If you wish it, it is not a dream.

To mobilize the entire community and make sure Jewish philanthropists get behind such an ambitious here are some of the things we will need to do the following:

Tuition Withdrawal programs– schools must begin producing charts clearly outlining plans to reduce tuition by incoming funding. The goalposts must be organized and transparent. Statements such as: “if we get X outside funding for security in our school, we will reduce our tuition by Y. If we get Z amount of funding for our general studies, we will reduce tuition by W”. Once broken down to elements, communities, and philanthropists can work on the next goal posts. If communities and philanthropists feel like they are pouring money down a bottomless barrel, the chances of making any progress are exceptionally low. The moment we begin seeing real tuition reductions go into place, we will see a tsunami of energized people working to further our goal of tuition reduction.

Student expansion plans– if we are only thinking of reducing tuition for current day school families, we are failing as a people and this is no longer a Jewish people endeavor, it is a narrow mission. We must think broadly. In 2017 the Tanenbaum CHAT High School in Toronto was given 14 million dollars for tuition assistance. Tuition was reduced from $28,000 to $18,500 for a fixed period of five years. The school consolidated two of its campuses to keep costs low. Over the next two years, applications to the school went from 200 a year to 350 a year despite being previously on the decline. 80 of the applicants were from outside the day school system. Alongside planning for tuition reduction schools must also make concrete plans to successfully absorb more students. If going tuition-free is going to be successful we must make sure it is something that will benefit every single segment of the Jewish community, regardless of their background. Sure, schools will still have the discretion of whom they take in and what standards they want to keep to, but we must make sure we do this with a broader perspective in mind.

Communitywide mobilization– as the joke has it, Jews always have the synagogue they go to and the synagogue they will not go to and that is fine. We still need to make sure that efforts to make our day schools tuition-free are undertaken by a broad coalition from various backgrounds and denominations. We do not all need to sit in the same room. We do need to make this a top priority across communities and projects very clearly to ourselves and to others: Jewish education is our top priority. Like in Toronto, widescale community involvement and responsibility will have the immediate impact of reducing costs, eliminating unnecessary competitive costs, and engage students and families like never before. Will it happen? If you wish it, it is not a dream. 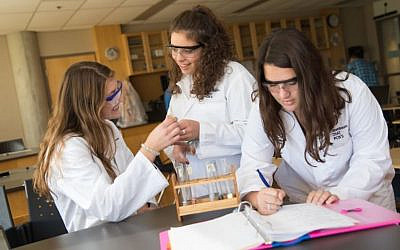 Students in the science lab of Toronto’s TanenbaumCHAT. (Courtesy)

Benefits- the benefits of tuition-free day school education are transformative game-changers, sure to profoundly improve Jewish communities implementing it. To understand these benefits just flip the many adverse effects of a high price tag of Jewish education on communities. These include lower birthrates, financial stress on parents, inequality, and many Jewish children who end up without a Jewish education despite wanting one. Now imagine a Jewish community in which families do not need to think of Jewish education as a burden, but as a beautiful opportunity, where parents need not be concerned about costs impacting their family size, where many families who cannot afford sending their child to a Jewish school suddenly can or where Jewish education becomes such a norm that everyone sends their child there. Surely, this will transform Jewish life as we know it. It will build stronger and bigger communities, assure the proud and informed Jewish identity of a young generation, and will make for a happier and more unified community. Financial, racial, or structural inequalities that are often exacerbated by high tuition costs will foster a more unified, equal, and yes, prosperous Jewish community. I think of the hundreds of thousands of Soviet Jews who came to American in the ’80s and ’90s and in many cases were not able to afford day school tuition. I think of those thousands of children that could have grown up with stronger bonds to our community and what that would do to the future of our community. I think of the hundreds of thousands of American-Israelis living in the U.S. so many of whom share with me that they would love to send their child to a Jewish day school but cannot afford it. While many schools offer tuition assistance to families who cannot afford it, there is a huge number of those who opt out because they “don’t want to feel like schnorrers” (as some of them have told me).

Universal free Jewish education will dramatically shift who we are as a Jewish community into a larger, more equitable, prouder, more knowledgeable, more committed, and more prosperous community. The students that leave our day schools will go on to lead proud Jewish lives, inspired by a unique commitment to giving back and continuing to build a broad and generous Jewish community that is welcoming and leaves no one behind.

This should be our first and foremost communal priority.

As Prime Minister Golda Meir told my grandfather Rabbi Bernard Poupko, decades ago: “Next to the security and the support of the State of Israel, I consider the All-Day Jewish- School as the most vital concern of American Jews. Only this type of education can and will guarantee Jewish survival and Jewish continuity — without it our hopes are uncertain.”

We have a generous, capable, and dedicated community. Let us put ourselves to it.

If you wish it, it is not a dream.