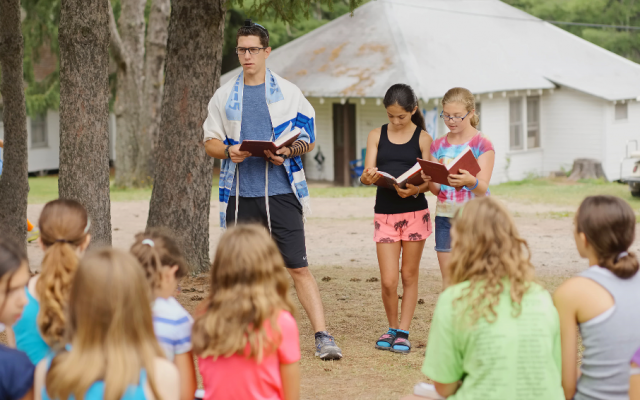 This week we read my bar mitzvah portion, Vayigash, which contains the dramatic encounter between Joseph and his brothers.

As we study the cycle of weekly Torah readings each year, we bring new perspectives and experiences to bear. And in particular, as we reach Vayigash, I pause for my own reflection and introspection on what I observe differently in the same text.

This year, I have gained three fresh insights that seem particularly relevant for the field of Jewish camp and for our broader Jewish community.

Insight #1: After listening to Judah’s emotional plea, Joseph no longer can contain himself, and he orders all of the Egyptians out of the room. Twenty-two years after being thrown into the pit, he reveals himself privately to his brothers, in a loud cry that is “heard throughout all of Egypt, even in the house of Pharaoh.”

We often say that what happens at camp, far removed from your own home and community, reverberates in ripples far beyond camp’s private bubble. In so many ways, the “magic” of Jewish camp comes from being away from home, in an intentional, immersive Jewish environment. Camps pay careful attention to each participant, to each individual learner. And yet the joy-filled voices echo far beyond camp, to our homes, our friends, and our entire community.

Insight #2: Joseph rose to ultimate prominence and leadership in Egypt, far away from his family and home. And yet, the Torah teaches that at his core, he remains deeply connected and tied to his family. We each carry with us important life lessons — appreciated and valued I hope — that help shape the contours of our lives.

Later, when Jacob travels to Egypt to be reunited with his beloved son, Joseph quickly takes him for an audience with Pharaoh. Jacob immediately blesses the mighty Pharaoh, a great example of the importance of engaging with the secular society and its leadership. Pharaoh curiously asks Jacob his age: “How many are the days of the years of your life?” Jacob responds somewhat cryptically, comparing the length of his life with his forefathers. As he departs, Jacob actually bestows another blessing upon Pharaoh.

Camp often teaches a lesson in valuing each moment of each day. Every day is filled with activities from wake up to lights out; campers say that a day at camp feels like a week and a week passes as quickly as one day. The impact of each day, each week, each season, builds cumulatively on each other. In the same way, how do we make the most of each experience, cherishing the moments of our lives? We need to make each day truly count.

Insight #3: During his encounter with his brothers, Joseph declares “I am Joseph” and immediately asks “Ha’od Avi Chai” — “Is my father still alive?” How appropriate it is to have this very question asked this particular week, when one of our Jewish community’s most impactful philanthropic foundations officially sunsets.

The AVI CHAI Foundation, established 35 years ago by Sanford “Zalman” Bernstein z”l, has invested more than $1.2 billion to strengthen Jewish education, culture, practice, and peoplehood in North America, Israel, and the former Soviet Union. In North America, its support has been focused on the most intensive and immersive educational experiences that exist today — Jewish day schools and Jewish camps.

AVI CHAI’s initial work in Jewish camping began in 2000, when it funded a study of the field, called Limud by the Lake, conducted by researchers at Brandeis University. The report inspired and guided much of AVI CHAI’s support for overnight camping — developing counselors as Jewish role models, strengthening the bench of current professionals, and expanding facilities and capacity — all to deepen and broaden the camps’ lifelong impact on the Jewish identity and connection to Israel of its many participants. At the same time, Foundation for Jewish Camp — created by the visionary lay leaders and business entrepreneurs Rob Bildner and Elisa Spungen Bildner — became a key vehicle and effective partner for AVI CHAI’s investments in the field.

Together, the dream of a dynamic, growing, vibrant field has become reality. In 20 years, the number of youth, teens, and college-age counselors attending one of more than 300 Jewish camps across North America has increased by over 25 percent; to more than 180,000 during the summer of 2019.  This represents almost 20 percent of kids from 4 to 17, growing up in households with at least one Jewish parent.  Over this two-decade period, more than 600,000 people have spent at least one summer in a Jewish camp!

Throughout my 10 years leading FJC, I have had the honor and good fortune to benefit from a very strong, effective partnership with the AVI CHAI trustees and professionals, especially as we approached the planned spend-down of its corpus and sunsetting of its grant-making at the end of 2019.  Working collaboratively during those 10 years, we have found support from dedicated funders including the Harold Grinspoon Foundation, the Jim Joseph Foundation, the Maimonides Fund, and the Marcus Foundation, among many others, who have followed AVI CHAI’s leadership to invest significantly in FJC and in the field.

“Ha’od Avi Chai?” “Is my father still alive?”  After 35 years, we must answer in a strong, affirmative way.  Yes, indeed, the amazing legacy gift of AVI CHAI will live on, as we continue to help Jewish camps work their magic as they forge powerful, joyous Jewish identities and lasting connections to Israel.

This week, as I considered and reviewed my bar mitzvah portion once again, amazingly, the Torah’s lessons jumped out just at the right time, speaking to us in such powerful, relevant ways, especially as we enter a new calendar year.  First, the impact of our work echoes and ripples in ways far beyond what we could ever imagine.   Second, we need to act proactively and intentionally, making the most of each day and every opportunity.  Third, as parents, as professionals, as community members, we should keep focused on life’s most important activities and lessons, which truly can leave a lasting legacy for years to come.