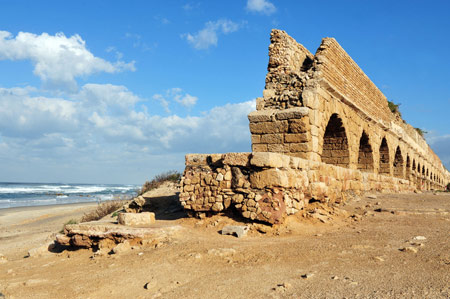 Caesarea is not generally known as a city of Jewish wonders; in fact it was the epitome of a ‚non-Jewish city‘ built by Herod around the year 20 BCE as a gift to Rome, naming it after the Caesar. Acting as the capital of Roman occupation of Judea for several hundred years, it is remembered as the spark of the Jewish rebellion in 68 and the tragic ending of Rabbi Akiva’s life; most other memories are decidedly not Jewish.

Yet, this past Shabbat saw a Jewish wonder in Caesarea. It punctuated a remarkable phenomenon we have been witnessing called kibbutz galyuot—ingathering of Jews from all corners of the earth. Specifically, it manifested in a group of young Polish Jews here on a trip sponsored by Shavei Israel—a remarkable organization dedicated to finding lost Jews throughout the world and bringing them home to Israel. 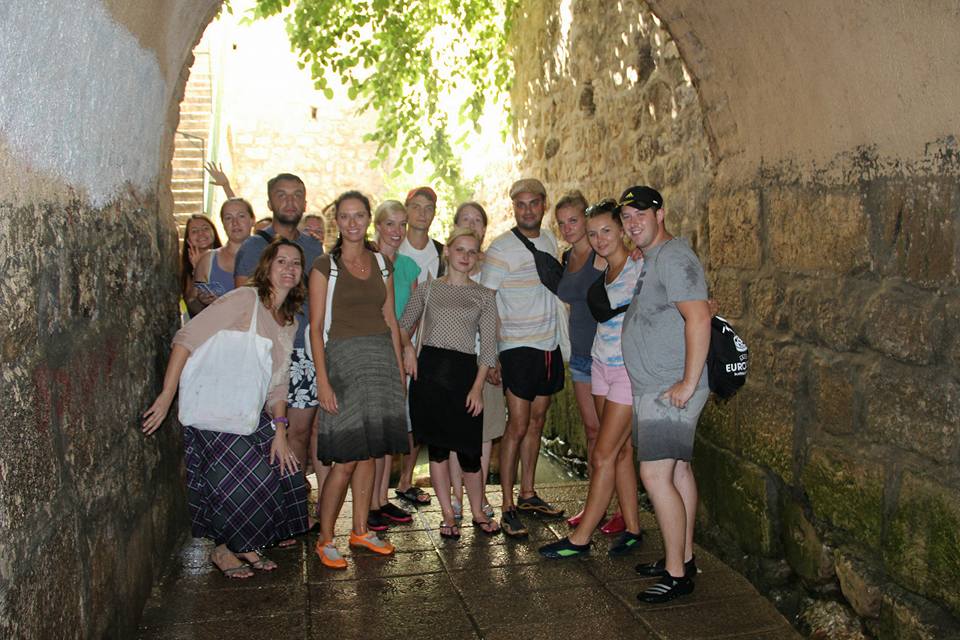 Fifteen Poles joined together for two weeks of exploring the land of Israel, Jewish heritage and their own Jewish roots. Some found out they were Jewish in the last few years, others knew since they were teenagers. Shavei Israel sent me as their emissary in Krakow to cater to Poles who discover their roots and to welcome them to the Jewish world and to the Jewish homeland. I travel for two weeks every month from my home in Israel to Krakow, but this week we came to Israel together and spent Friday touring and Shabbat celebrating, in Caesarea. 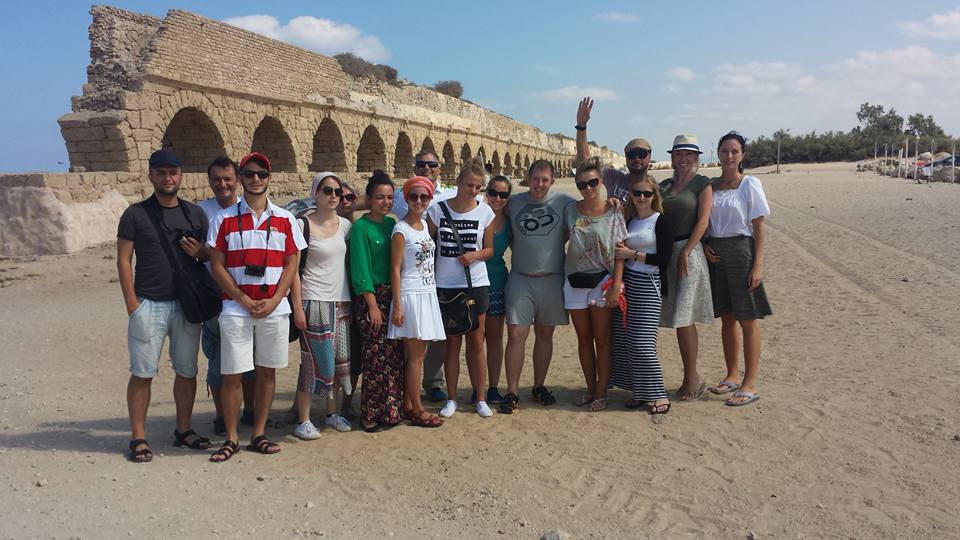 The weekend began with a visit to the famous aqueduct, the Roman invention which enabled a thriving city to be built away from an immediate water source. This novel solution changed the way the world lived, improved quality of life, and paved the way to a seemingly brighter future—but one which must be pagan, anthropo-centered and Godless. We there discussed the geography of Israel—how at first the mountain range was inhabited but then spread to the coastal plane as well. I also taught some basic Jewish history, covering the time of the forefathers, the Egyptian slavery, exodus, conquests of Israel, the monarchy and the first and second temple periods. It was important for them to understand that Jews had been settling this land for thousands of years. 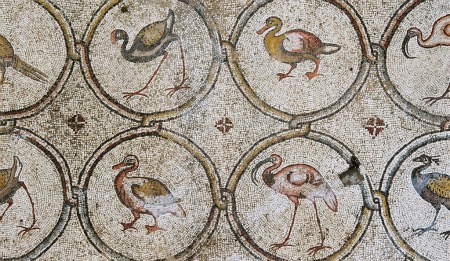 From there we noted that everywhere in Israel has a past, usually right beneath us! Sixty years ago during an army training exercise, Israeli soldiers came across an unusual hill in Caesarea, which seemed a little out of place. I showed them a hidden treasure in Caesarea—the Bird Mosiac. Archaeological digging uncovered the largest and most ornate bird mosaic in Israel, covering over 120 different species on a space of 200 square meters. Archaeologists believed it was the ground floor of an amazing Byzantine era palace which covered 3000 meters! 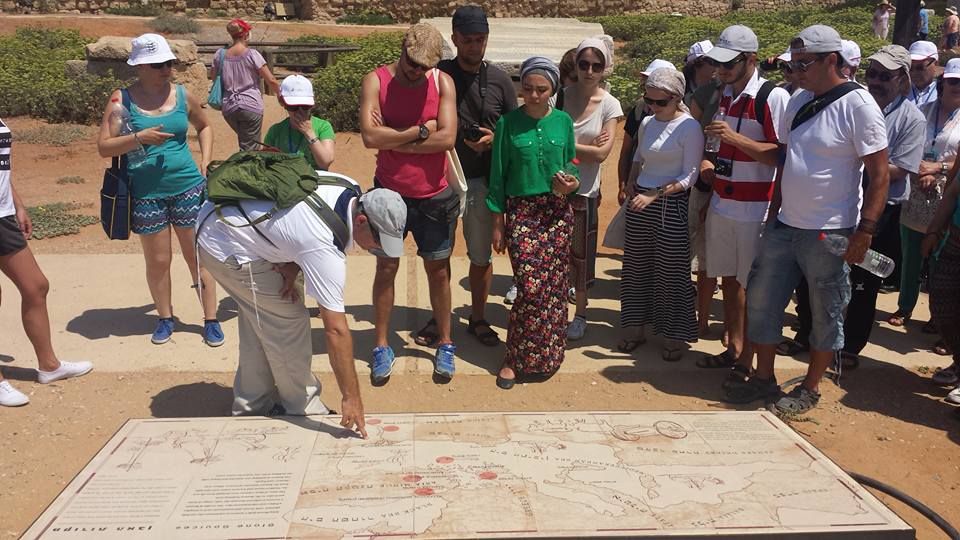 From there we drove to the gates of the Caesarea National Park and we made sure we had lots of water and hats as the temperature was edging towards 40! The Poles were wide-eyed as we visited the theatre, the Herodian Palace, the Hippodrome and the Roman bath-house, each time marvelling at the opulence, technology, advancement. Yet I reminded them that for Jews it always came at a price. 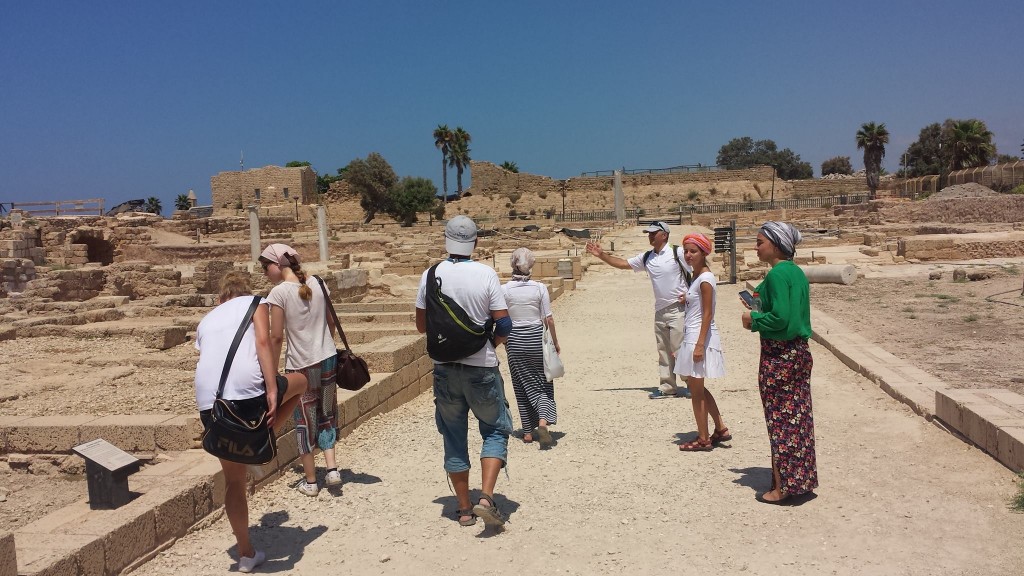 We stopped for a moment to take some shade and I quoted a famous passage from Mark Twain for them, as it seemed appropriate looking at the granduer of the structures but wondering where were the ancient Romans today?

“If the statistics are right, the Jews constitute but one percent of the human race. It suggests a nebulous dim puff of star dust lost in the blaze of the Milky Way. Properly the Jew ought hardly to be heard of, but he is heard of, has always been heard of. He is as prominent on the planet as any other people, and his commercial importance is extravagantly out of proportion to the smallness of his bulk. His contributions to the world’s list of great names in literature, science, art, music, finance, medicine, and abstruse learning are also away out of proportion to the weakness of his numbers. He has made a marvellous fight in the world, in all the ages; and has done it with his hands tied behind him. He could be vain of himself, and be excused for it. The Egyptian, the Babylonian, and the Persian rose, filled the planet with sound and splendor, then faded to dream-stuff and passed away; the Greek and the Roman followed, and made a vast noise, and they are gone; other peoples have sprung up and held their torch high for a time, but it burned out, and they sit in twilight now, or have vanished. The Jew saw them all, beat them all, and is now what he always was, exhibiting no decadence, no infirmities of age, no weakening of his parts, no slowing of his energies, no dulling of his alert and aggressive mind. All things are mortal but the Jew; all other forces pass, but he remains. What is the secret of his immortality?”

This message resonated with many of them as we concluded the Shabbat. And how powerful considering they themselves were in danger of vanishing, yet they miraculously emerged and are in the process of reconnecting to this immortal people! 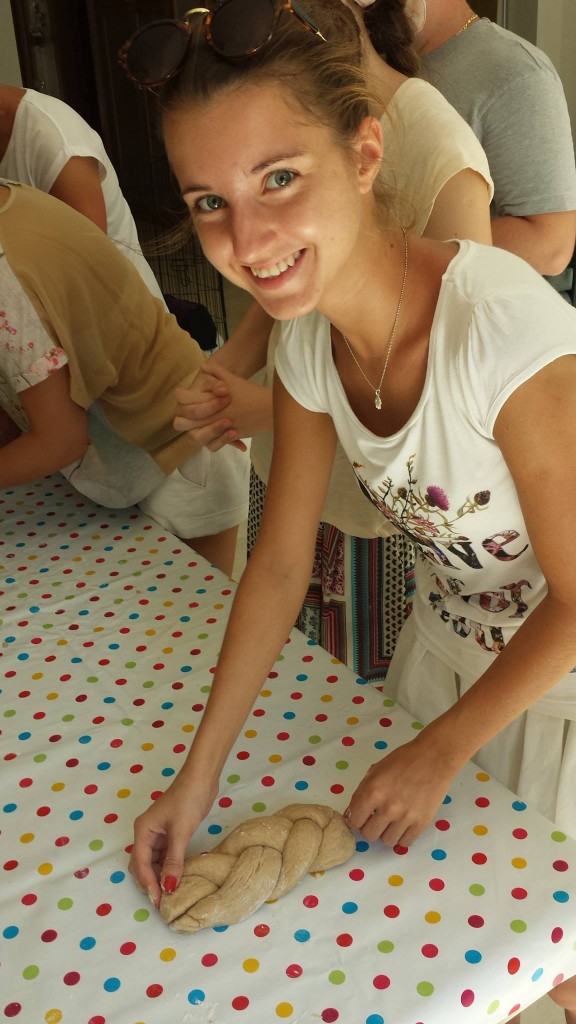 After the tiyul we came to our home—my in-laws graciously opened up their home for the Shabbaton. I had prepared Challah dough and we talked about the mitzvah of taking challa. We all made the bracha together and then proceeded to learn how to braid our own challah. For some this was their first time experiencing Shabbat. Magda (*names are changed) found out about her Jewish roots only a few years ago but she has since become a committed member of the Warsaw Jewish community. She came on this trip last year and with each visit she grows more connected. 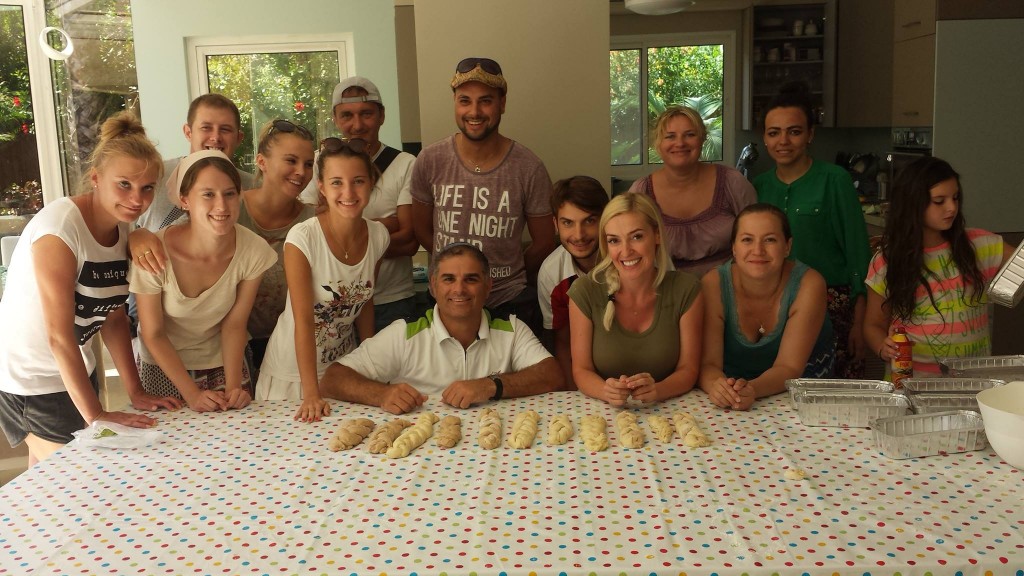 For Agnieszka it was a first experience, she was slowly finding her ground as a Jewish Pole. She asked so many questions showing keen interest in all the different traditions. As the group lit Shabbat candles we sensed a spirit descending upon Caesarea, joyously comforted by the return of some of the children of Israel. 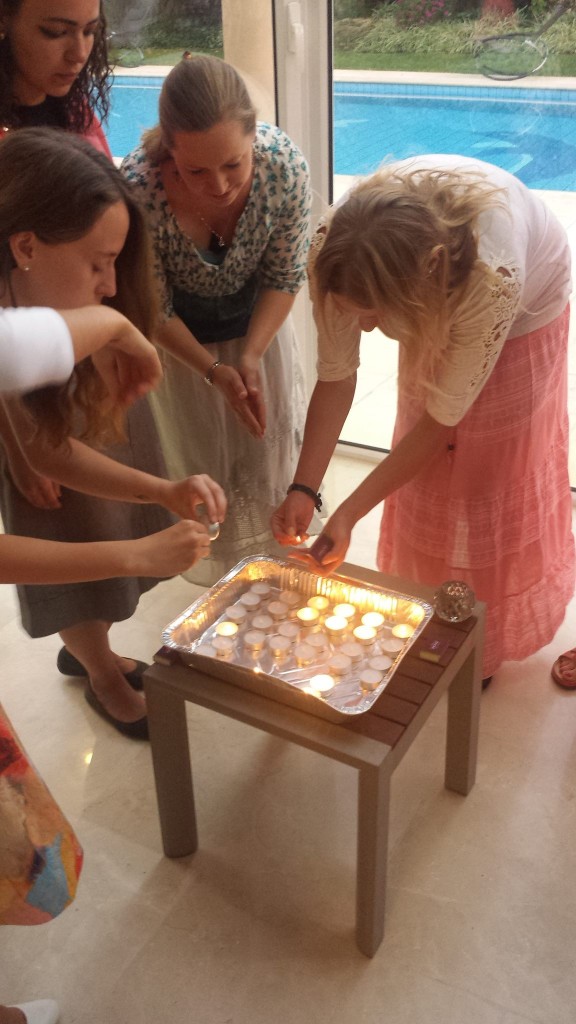 Shabbat prayers were coordinated with the wonderful Rabbi Lieberman who has been doing kiruv in Caesarea for the past ten years and has a Shul in his home right across the street from my in-laws. Singing the songs during kabbalat Shabbat and dancing during the prayers was a real treat for them, quite memorable. On shabbat day there was a double Bar-mitzvah which afforded the group more new experiences. Shabbat lunch and all the meals were prepared by my wife Hadley and my children participated in the singing, dvar Torahs and discussions.

The final meal was exhilarating as the Rabbi hosted seuda shlishit and members of the Caesarea community joined and shared inspirational divrei Torah and stories to the group. Each story focused on the remarkable blessing it is to be Jewish but also on the great responsibility. I hope that this Shabbat was the beginning of a journey towards a more serious commitment to Judaism, a stronger connection with God and a deeper love for Eretz Yisrael.

With the help of Shavei Israel these young Jews will return completely to the Jewish world, engage in Jewish life, visit Israel more often, perhaps move here and continue to be part of the miraculous story. Rabbi Akiva must be smiling down upon the city where he sacrificed his life to teach Torah and bring Jews closer to God and their heritage.