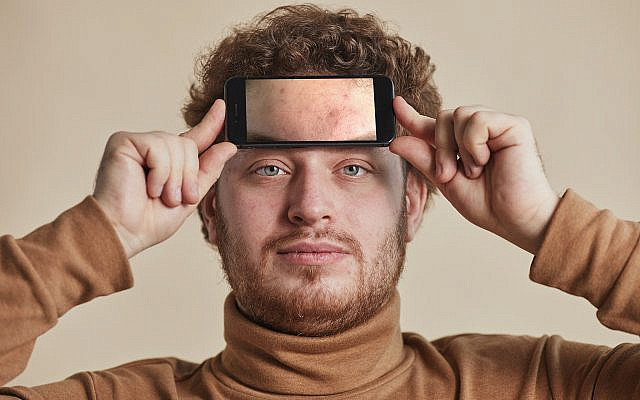 After detailing how to fashion the Kohen Gadol’s tzitz, the Torah commands that the tzitz be placed on Aharon’s meitzach* (Ex. 29:38). The word meitzach is commonly translated as “forehead,” although we will see below that this is not universally agreed upon. Targum pseudo-Jonathan (there) translates meitzach as padachta, a word that is also used in later Hebrew. In this essay we will attempt to distinguish between the Hebrew word meitzach — forms of which appear some thirteen times in the Bible — and the later padachat, which does not appear in the Bible but is found in rabbinic literature. In doing so we will explore several etymological theories regarding the origins of the word padachat and where it comes from.

Contrary to popular belief, most commentators understand that the Kohen Gadol’s tzitz ought to be placed above the forehead in the same space where the tefillin is laid. These commentators will encounter difficulty in rendering the word meitzach as“forehead” because they maintain that the tzitz is not placed on the forehead, but higher up. How, then, do they explain the Torah’s requirement to place the tzitz on Aharon’s meitzach?

Chiddushei HaRitva and Tosafos Yeshanim (to Yoma 71b) explain that although the Torah literally says that the tzitz should be “on Aharon’s meitzach” (Ex. 28:38), this actually means “on top of Aharon’s meitzach.” Thus, they understand that while meitzach means “forehead,” the Torah never says that the tzitz should be placed on the forehead, but rather above the forehead. Alternatively, these two sources explain that while in Rabbinic Hebrew the term meitzach refers to the “forehead,” in Biblical Hebrew it actually means the “top of the head” (or at least includes the top of the head along with the forehead). According to this explanation, the word meitzach cannot accurately be translated as “forehead.” (See also Tosafos HaShaleim to Ex. 39:28 which states that meitzach does not mean padachat.)

Rabbi Shlomo Pappenheim of Breslau (1740-1814) connects the word meitzach to netzach/nitzachon (“victory”), explaining that the forehead is the most noticeable and visible part of the body, such that it seems to “overpower” the rest of one’s person. Rabbi Pappenheim connects both words back to the biliteral root TZADI-CHET (tzach), although his way of explaining that connection may seem a bit farfetched. Rabbi David Chaim Chelouche (1920-2016), the late Chief Rabbi of Netanya, offers a more direct connection between meitzach and tzach. He explains that a person’s forehead is generally smooth and devoid of hairs, so it can appropriately be described as tzach (“clean,” “pristine”).

As we mentioned in the beginning, another word for “forehead” in Hebrew is padachat. This word appears in the Mishna (Niddah 3:5), which states that a child is, according to halacha, considered “born” once his or her padachat has already exited the mother. Similarly, the Talmud (Yevamos 120a) rules that a corpse can be positively identified (to allow his widow to marry someone else) only if the padachat and face are intact. Of course, the Mishna and the Talmud do not explain what padachat means, so how do we know that it is a “forehead”?

A tradition going back to the Geonic period explains that the words meitzach and padachat are synonyms, but that the former is Biblical Hebrew and the latter is Rabbinic Hebrew. This idea is found in Rabbeinu Hai Gaon’s commentary to the Mishna (Niddah 3:5) and in his student’s commentary to the Talmud (Shabbos 80b). It is also cited by Rabbi Zecharia Aghmati (1120-1195) in Sefer HaNer (to Shabbos 80b) in the name of Rav Hai Gaon. This idea is later repeated by Rabbeinu Chananel (to Shabbos 80b) and Sefer HaAruch. According to this, meitzach and padachat mean the same thing, just in different versions/dialects of the Hebrew Language. Indeed, Rashi (Shabbos 151b, Yevamos 120a, Kesubos 75a, Bechoros 46b) always defines padachat as meitzach, suggesting that he too understood them to be perfectly synonymous. (My Belgian friend Rabbi Yosef de Jong suggests that meitzach refers specifically to the front of one’s forehead, while padachat includes even the temples, although he concedes that he has no source to support this suggestion. That said, the Academy of the Hebrew Language’s official anatomical dictionary defines padachat as glabella — a Latin term which refers to the smooth part of the forehead above and between the eyebrows, thus seemingly excluding the temples.)

Now that we have essentially established that meitzach and padachat mean the same thing, we can begin to explore the etymological basis of the word padachat. Its root seems to be PEH-CHET-DALET, but such a root is not attested to anywhere else in Hebrew. Dr. Alexander Kohut (1842-1894) writes in Aruch HaShaleim that the word padachat is of Persian origin. Indeed, according to the Comprehensive Aramaic Lexicon Project (known to scholars as CAL), the few places in which the word padachat appears in the Talmud and Rabbinic literature are the only instances of this word in Aramaic texts. This suggests that it is not really an Aramaic word, supporting Kohut’s theory that the word is originally Persian, because if it is not from Hebrew or Aramaic, then Persian would be the next logical candidate.

Nonetheless, some learned rabbis argue for a Semitic or even Hebrew basis for the word padachat. By way of metathesis, Rabbi Yaakov Yehuda (Zilberberg) de Kassif (1914-2003) connects three different Hebrew roots which use the consonants PEH, DALET, and CHET in various orders: dachaf (“push”), pachad (“fear”), and padachat. He explains that haste and confusion oftentimes “push” their way to the forefront of a person’s emotions, thus causing “fear” to become one’s dominant feeling. One’s internal sense of fear is, in turn, “pushed” outwards and is oftentimes physically manifest on his or her “forehead.”

Similarly, Rabbi Yehoshua Steinberg of the Veromemanu Foundation suggests connecting the root PEH-DALET-CHET with PEH-REISH-CHET because of the interchangeability of the letters DALET and REISH. The latter means “flowering” or “blossoming” and thus refers to something that protrudes or sticks out. This somewhat echoes Rashi’s (to Shabbos 151b) comment about the padachat/metzach, that it is the smoothest and shiniest part of the face, such that it sticks out the most.

The Arabic word fadiha (or fadichah)has entered Modern Hebrew slang and is commonly used to refer to a “shameful occurrence,” a “scandal,” or an instance of “public shaming.” When asked about an etymological connection between fadiha and padachat, Rabbi Shaul Goldman suggested two possible ways of understanding the word fadiha. Firstly, he suggests that the word fadiha is related to the Aramaic root BET-DALET-CHET, which means “happiness” or “joking” (and is the etymological basis for the Hebrew word bedichah, “joke,” and the Hebrew/Yiddish word badchan, “joker”). Because synonyms for joyous expressions are often used to also refer to “ridicule,” the BET morphed into a PEH to become fadiha.

Alternatively, Rabbi Goldman supposes that padachat and fadiha are related in that both imply “exposure” (noting that the verb fadah in Arabic means “to expose”): The forehead is the most exposed part of the body, and a fadiha is an embarrassing incident which exposes one’s foibles. Although totally anachronistic, we may perhaps add that Jean-Luc Picard’s memetic facepalm is a very human reaction to an embarrassing situation, which further cements the connection between padachat and fadiha.

*NOTE: Cognates of this word in the Bible are always in the possessive/construct form, so they are vowelized with a TZEIRI (or CHIRIK) under the MEM to become meitzach. That said, there is a controversy over how the word should be vowelized when not in the construct form. Some argue that the MEM should still have TZEIRI and the word remains meitzach, while others maintain that the MEM should be vowelized with a SEGOL and becomes metzach. This dispute has practical ramifications in the Yom Kippur liturgy in which we confess sin committed with a “brazen forehead,” as some prayer books read “azut metzach” and some read “azut meitzach.”