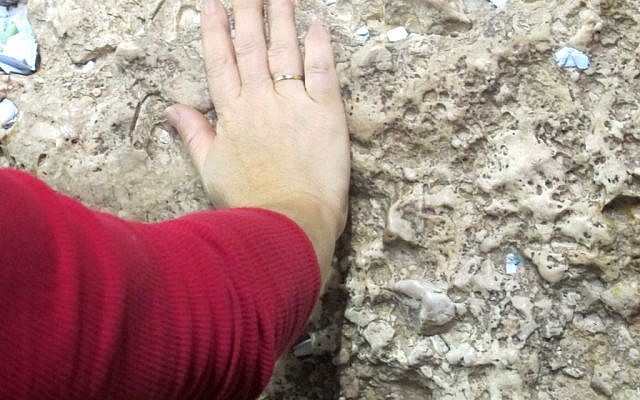 Putting a hand to the stones at the Kotel (photo credit: Leeor Bronis/Times of Israel)

My post today is primarily questions to which I do not have any answers. But at the very least, I wish to raise these questions as I have found that they can lead to a better grasp on blind belief (which does bother me). These questions apply to any belief in a deity or greater force than us. It does not matter if the believers are Jewish or not, because the questions relate to faith in general. If this is a touchy subject, please stop reading now as I do not wish to offend anyone.

I remember meeting a woman whose mother was very ill. I knew this woman to have a good heart, and she was a dedicated wife and mother. In addition, she was a well educated woman, extremely well read and quite able to form very complex opinions on her own. I also knew that this woman identified very much as being Jewish, but was not particularly fond of any structured religious ceremonies.

At one point, I noted that she had a thin red string tied around her wrist. Although I had seen this very often before, I assumed that it had another significance for this woman. I asked her why she wore the red string and she gave me an answer somewhere between “good luck”, “keep away the bad” and just a touch of belief in a deity. I was very surprised and asked her if she really believed that a piece of string would make any difference. She became very upset, began to spout some standard challenges to Jewish beliefs, and the conversation ended there.

I have thought about that interaction for all the years since it occurred. This was a woman who needed to believe in something, even though she didn’t seem to clearly have a handle on what that “something” was. Obviously, she does not have to justify her beliefs or lack of beliefs or way of believing. But I was intrigued by her clear need for something to believe in.

Amongst my beliefs, I believe in humankind’s amazing capacity to push forward through the dark. Although I am very much immersed in the world of technology, I also find myself amazed at the ever-increasing pace of innovation. It seems that from the point that someone raises the possibility of a new technology, to the point that the technology is being marketed, is sometimes only months. There are definitely very complex technologies that still take years to come to fruition. But there seems to be enough research and development going on to make for near daily announcements about transformative technology. At some point, our lives transform so much that they bear little resemblance to what we remember from even a few years ago.

Sometimes just for fun (because I really don’t have any hobbies), I try to imagine what type of world we will be living in within the next 50 years. To be clear, anyone who speaks in absolute terms about predictions for the future beyond 2 to 3 years, should be regarded with significant dubiousness. Nevertheless, I allow my mind to wander.

Given the pace of advancement in the medical/technology worlds, I find it hard to believe that astonishing breakthroughs will take more than a few decades. I would be amazed if it will take longer than 2 to 3 decades to cure cancer. 3-D printing using extremely inexpensive nutrient mixtures will soon bring healthy food to people who have never known what it means not to be hungry. Advancements in power management will make it possible to turn as much salt water as needed into clean water for the world. New materials that are strong and weatherproof, along with robotics for manufacturing and assembly, will likely soon make housing easy to distribute, especially in the developing world. And at some point, somebody will make fusion a viable energy source. And when that happens, no one can predict the overwhelming effect on society.

My question goes as follows. Within the next 50 years (or pick any number you feel more comfortable with), I believe that many people on this planet will no longer have to fear disease, hunger and perhaps even death. Wars will become far less acceptable [I am Canadian and this is how we talk]. The general populations will be beyond the reach of their governments in terms of access to information and knowledge. It simply will not be possible for a country like North Korea or China or Russia, to block all forms of communication. When every soldier standing on the field, gets a Twitter feed clearly outlining the world’s view of his or her direct actions, it will likely lead to a significant amount of dissent. Such a situation does not bode well for totalitarian authorities.

So I wonder. When humankind no longer has to fear all those things that humans tend to fear, how will that affect religious beliefs?

I am well aware of the fact that there are people who are true believers and will continue to live the same religious lifestyle independent of any technological advance. A perfect example is our present situation in Israel in terms of water.

Due to massive desalination projects, Israel will soon be able to sell water to other countries. Even back when I made Aliyah, the country was glued to the news in order to know the level of the Kinneret. A dry winter truly drove people to panic. And on more than one occasion, masses prayed together for G-d to deliver rain. Today, our water does not fall from the sky but rather comes from the sea. And in time, we will be able to enjoy a full Kinneret every year, as demands on its water diminish.

Do you think that any religious Jewish person will stop praying for rain? In 50 years from now, when the vast majority of people will never have experienced a drought in Israel, will they change the prayer books in order to remove any mention of rain? In the future, when medicine has managed to overcome paralysis and amputation, via regrowth of tissues and bionics, will religious Jews stop saying the initial morning blessings that thank G-d for allowing them to stand on their own, straight up?

In this new reality, fear will not drive people to prayer. And that will be a huge change in the world. With all due respect to every religion, fear is a welcome and powerful driver for filling the seats in the respective houses of worship. People who have never prayed, begin to when they discover they have cancer. People who have never given charity, begin to when a child becomes ill. People who have never concerned themselves with the needs of others, suddenly become generous when they realize they are facing their own demise. Fear is a very powerful driver for belief in anything. If medicine and technology manage to eliminate the reasons for people to fear, how many will still embrace a deity?

It is possible that even in 50 years from now, there will be just as many radicals willing to denounce any logic or common sense, and who will be more than happy to fight for their deity until death. Zealotry is a strange creature and might very well be the reason why the future is constantly delayed. The numbers of such people in the future may still be in the billions, and no medicine and no technology will deny them the endless drive to fight and destroy everything around them.

I can only hope that there will either be some way to reach their souls via a wireless connection, or at the very least there will be some way to repel them without killing them. If so, perhaps we will be able to wait long enough for these billions of people to open their eyes and accept the gifts that are waiting for them on this world. Unfortunately, the other option may be to, far too effectively, eliminate the problem. I would not welcome such a solution but once people have experienced life without fear, they may no longer tolerate those who wish to reintroduce it into the world. I never said that the future would be pretty.

Let me also point out that I do not deny in any way or form that all of the advances that we are making on a daily basis, could very well be a sign from G-d. The moment of inspiration that leads to a medical discovery may very well be a whisper from an angel on the developer’s shoulder. The lack of some natural disaster that would destroy the desalination plants across Israel, may very well be a sign of G-d’s protection over us. I cannot deny these possibilities and have no desire to.

Perhaps it was always G-d’s plan to have humans realize that they can create their own paradise without having it imposed upon them, or prefabricated within the still hidden Garden of Eden. Just as a parent ultimately wants their child to succeed on his or her own, perhaps this was the plan all along, for us to become our own saviors. Once again, I can’t challenge such logic and I have no desire to. My own personal challenge to G-d is unrelated to our present day successes. And I will stop at that point.

I hope that anyone who has read this post appreciates that all I wanted to do was to raise questions that should make us all take a step back and think. I believe that we should all explore our true reasons for belief, in what ever it is that we believe. I continue to marvel at the brilliance and foresight of the rabbis of old, even as I hold a supercomputer [i.e. smart phone] within my hand. I personally do not have any difficulty with the blending of science and religion. But I suspect that many people will soon need to address issues that they never thought would arise. In the end, belief can overwhelm logic. And when all is said and done, I think that this can be the most powerful force for good.