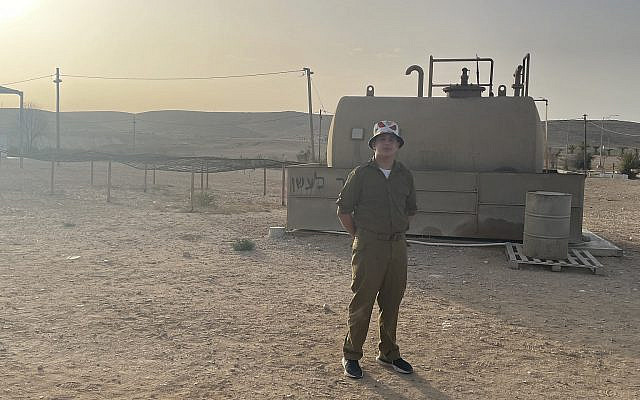 In uniform at Gadna in April 2022. Gadna is the IDF's 3.5 day experience for Israeli and other youth to be exposed to the concepts and practicalities of the Israel Defense Forces. (Luiz Gandelman)

Gadna is the Israel Defense Forces’ program for Israeli High Schoolers to be exposed to the workings of the IDF and to become prepared for their soon-to-come army service. Numerous youth from other countries like myself, however, take part in the experience nonetheless. Gadna is an abbreviation for G’dudei Noar, literally meaning youth battalions. The program was established by the Haganah prior to the 1948 War of Independence, although it changed a lot over the years, becoming eventually the educational program it is today.

Gadna was absolutely draining. It was probably the most physically demanding three and a half days I had to endure. It was a period of little sleep and a lot of exercise, but extremely rewarding nonetheless. We were allotted 7 hours of sleep each night, and our commander would stand and watch over us for 30 minutes each night to ensure that we actually went to sleep. Anyone who made noise or used their phone would have to stand outside in the cold at attention, which meant forming a V with your feet, placing your (full) water bottle next to your left foot, and placing your hands behind your back while forming a diamond with them. The second person to speak or look at their phone would do the same, except they would have to do so while wearing their uniforms. The third to speak would have to clean the area around the tents where we slept with the sergeant. While this method ensured we slept, realistically, we slept less, as it was cold, and the mattresses were hard, and everyone was moving around in their sleep, making a lot of noise. This led to each of us receiving somewhere between 3-5 hours a night in reality. This was extremely exhausting, and it took a toll on us. Food was also a commodity. Lunch was rather good, as I had Schnitzel for all of them. Breakfast and dinner, however, were the same. They were also repeated every day. My team was 9 boys, meaning that the food was split among us. We were given 1 can of corn, 1 can of olives, 1 can of tuna, 2 loaves of bread, and finally some cheese. This was just enough for all of us to get the nutrients we needed, which was slightly frustrating, but it was all part of the experience regardless. 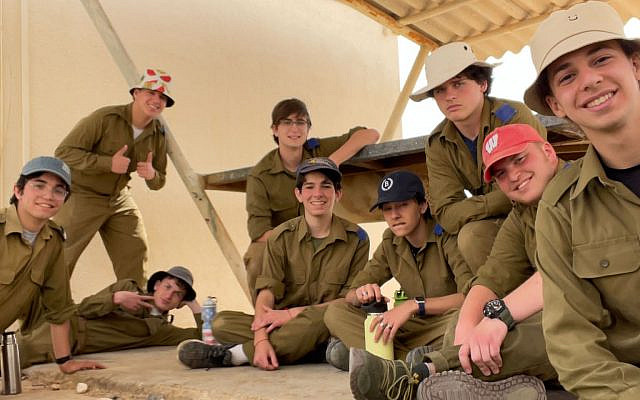 “Tzevet Hamesh” or “Team Five”, the 9-person battalion I was assigned to during my time in Gadna in April 2022. This team of 9 boys stuck together throughout the whole experience and were my brothers who I shared this experience with. (Luiz Gandelman)

Gadna was also extremely demanding due to physical activity. We had to stand at attention in straight lines for a large portion of our days, and run for more large portions. Any mess up would result in 7 push-ups. We constantly walked back and forth around the base and often jogged or ran. We had crawling exercises and a camouflage activity, which I found to be the most fun. Me and one of my friends in my “unit” were assigned together to hide from our other friend who would be looking for us. We hid inside a tunnel and covered ourselves with trash and the darkness from the tunnel, resulting in us winning the challenge together.

My entire group was also tasked with something called a “Gibushon”. This grueling physical exercise started off with about 25 people and ended with 8. It consisted of primarily physical exercises like running back and forth and doing sit-ups and push-ups. These exercises eliminated almost everyone, as the Sergeant repeatedly reiterated that this was optional and we could quit at any given moment, leading to many people giving up. There were 8 of us after these exercises. We were then instructed to pick up two rocks and hold out our arms. Every few seconds we were told to move them up and then move them down at the next cue. While this was done, the sergeant continued trying to persuade us to quit. He eventually put a blue stripe on our faces, signifying completion of the exercise. All 8 of us remained. I was surprised that I had completed it, as I am not the most athletic person out there, but this exercise and this whole week showed me that I am capable of a lot more than I think. This whole week showed me that. I learned that I’m capable of a lot more physically than I previously thought, like all of the physical exercises on so little sleep.

Another impactful part of the experience was a challenge our commander assigned to our team. We all had to stand in a circle with our arms held out straight to our sides. The catch was that we had to do this for 10 minutes and only one of us could rest at a time. Immediately, without even saying anything, all of us put our arms around each others shoulders. We were no longer tired as our arms were resting on each others shoulders, and we were all supporting each other. We began to laugh and do coordinated knee kicks. Our commander informed us that we had figured out the exercise, as this was exactly what the solution to the challenge was. Our brotherhood made the cold disappear and made supporting each other a priority that was crucial to our entire experience at Gadna. 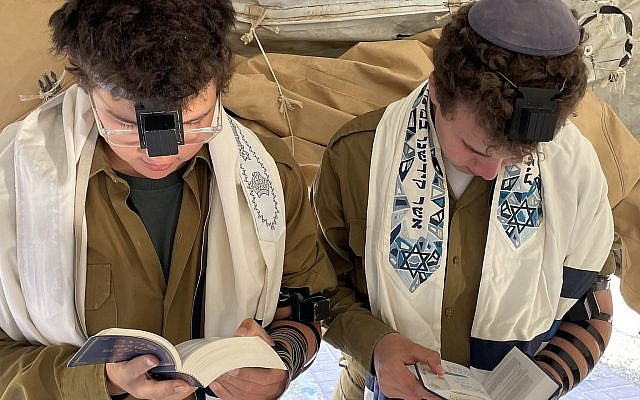 Me and a friend praying Shacharit in uniform during our time in Gadna in April 2022. Despite the rushed and exhausting schedule of Gadna, the program ensures participants with specific needs, such as dietary and in our case religious needs, are considered and cared for. (Luiz Gandelman)

We got the chance to shoot real M-16 rifles and learn about guns. It was very important, as we not only learned how to be safe around guns, but also the complicated ethics around them, which is crucial for everyone to learn, as guns are killing machines and require a sort of fear-based respect that is best instilled through an experience like Gadna. While shooting the guns was thrilling and new, I personally believed that learning about the weapons and their potential was more impactful. Israel is a society where guns are everywhere. IDF Soldiers walk around with guns not only on their bases and on patrol, but also while shopping in the Shuk and getting dinner at the mall. This is a shock to most non-Israelis I know, and I firmly believe that it is because it is new to them. Israelis have been used to this for a very long time. Since we are exposed to guns so often here in Israel, it is even more crucial that we learn about the safety and ethics of them, as it prevents accidents and ensures the population is not only used to guns, but also knows the basic safety behind these deadly weapons.

I also learned a lot about the IDF. We studied real scenarios and learned about issues, solutions, methods, and ethics behind the IDF and their operations, which showed me a lot of the behind the scenes of the IDF that I had not known before. For instance, I used to think neutralization of a threat meant shooting the person, but I learned that the term is used to any situation where the person is no longer a threat. I was also aware that shooting was not encouraged, but I did not realize the extent to which the IDF went to prevent shooting. We also learned about the morality of orders, with the Kfar Qasim massacre used as an example, as soldiers followed orders given to them by superiors which resulted in a massacre of 48 Arab civilians for no reason. This event shaped the future of the IDF, resulting in many of the rules regarding orders for soldiers today. 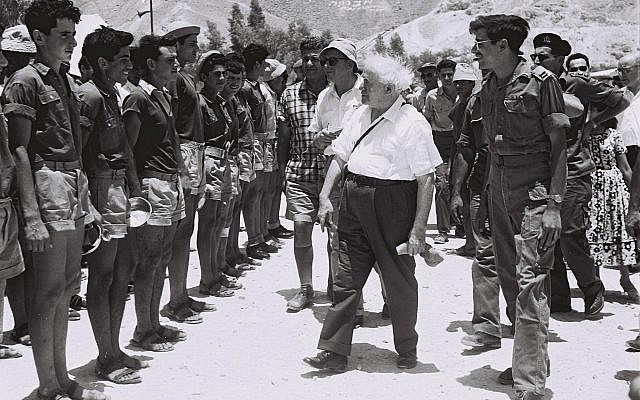 The first Prime Minister of Israel, David Ben Gurion, visiting Gadna participants in Be’er Ora, Israel in 1957. Gadna has changed over the years, but it has existed since before the 1948 Israeli War for Independence, and has been consistently active since then. (Israel National Photo Collection: Wikipedia)

Gadna was a really impactful experience for me, as I learned a lot about the IDF and the impact it has on day-to-day life in Israel and Israeli society. The most important thing, however, was learning a lot about myself. I learned that I was capable of overcoming small personal challenges, like getting up quickly in the morning, but also big challenges, like the gibushon. Our commander also emphasized brotherhood and teamwork, and I really felt my Tzevet helping me and I felt like I was helping them as well. We also spoke about how to deal with challenges, and how struggle is okay, but giving up is not. These lessons, both taught through talking and through activities and physical tests, all helped me grow into a much better and stronger person, and I am really happy with how this experience turned out for me and my friends, and I thoroughly enjoyed it.

About the Author
Luiz Gandelman is a 16 year old student originally from São Paulo, Brazil, who lives in Miami, Florida. He is involved with multiple Jewish and secular youth groups and political organizations. Luiz is a big basketball and Star Wars fan and an avid scuba diver. He is also a fan of geography, politics, history, and anything of the sort. Most importantly, he is a proud Jew.
Related Topics
Related Posts
Comments