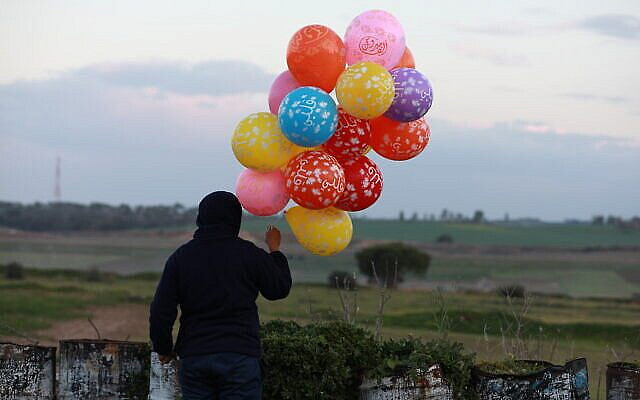 For over a week, Hamas has been escalating violence against the people who live on the Israel side of the Gaza border. Hamas started out with fire balloons which burned some fields and nature preserves. Then they moved up to explosive balloon bombs, which became more and more sophisticated and powerful. Explosive balloon bombs are intended to kill people. Saturday night and early Sunday morning, August 15, 16, 2020, Hamas increased the violence. First, about 800 people in Gaza held a violent protest in which some of people threw explosive devices at soldiers, who fired back. Later Hamas fired three rockets at the nearby community, Sderot. Iron Dome intercepted two of them, but one house was damaged by shrapnel. Nobody was killed, but several Israelis suffered various types of injuries. The IDF retaliated, this time bombing a Hamas rocket-storage facility.

Each time, Hamas accompanies the violence with publicity which characterizes the Gazans as victims and the Israelis as oppressors. I am convinced that Hamas WANTS the IDF to retaliate against them, preferably killing some Gazans. It would NOT be the first time Hamas has sacrificed Palestinian lives in order to get good publicity.

In contrast to the way Hamas publicizes the events, the IDF gives cold, objective reporting which aims at the intellect, not at the heart. The IDF spokespeople come across as good soldiers. It is easy to imagine them as militaristic oppressors. The IDF publicity does not make headlines.

The Israeli press has been covering the story, but with one exception, the international press has not deemed this escalation in violence to be newsworthy. The exception was a gift to Hamas. On Thursday August 13, 2020, Reuters ran a story authored by Rami Ayybud in Tel Aviv and Nidal al-Mughrabi in Gaza in which it regurgitated the Hamas line. The story did not mention the effect of the violence on the people who live on the Israeli side of the Gaza border. Since it is a Reuters story, it was distributed all over the world.

In fact, the people who live on the Israeli side of the Gaza border are neither military nor oppressors. They just want to live in peace. Many of them remember fondly the days before Hamas took over Gaza. In those days, there was no blockade. Gazans and Jews interacted with one another. The stories are heartbreaking. Though nobody who lives east of the Gaza border has been killed in four years, rocket after rocket has been fired at them. Every time a rocket is fired, a “red alert” is sounded and everyone has only seconds to get to a safe room or a bomb shelter. It is hard enough for the adults to cope with this, including getting their children to safety, but the children do not understand and are terrified. The one Israeli civilian who was killed in 2014 was a four-year old boy who could not get to safety fast enough. Many, many children suffer from PTSD and have difficulty in school. Many, many parents must deal with the problems associated with raising a child with PTSD. Many, many parents have had to comfort a terrified child, even after the event is over.

I can’t imagine what it must be like to live near the Gaza border. I can’t imagine walking a child to school, picking a route which will keep them near a bomb shelter all the way. I am in awe at how courageous the people who live near Gaza are.

I am also terribly distressed by what it has done to their psyches. As a group, they are angry, especially at the government for not ending the violence. They view themselves as victims, which, of course, they are. Still, viewing oneself as a victim is never a good thing and tends to exaggerate what is happening. Too often, it results in even the best people becoming bitter.

The attacks on the government, in my mind, are inappropriate. It is perfectly understandable that the people who live near the Gaza border, like all of us, focus on the events which are happening to them. The government, in contrast, has to worry about people all over the country. Additionally, many of the people in the government, including the Prime Minister (Netanyahu), the Foreign Minister, (Ashkenazi) and the Defense Minister (Gantz) were officers is the IDF. The opposition is even worse. Naftali Bennett, a Major in the IDF reserves and the head of the right-wing, largely-religious Yamina party, has been advocating for a war in Gaza for a very long time. The primary solution they see is military.

I believe that war is a horrible alternative and should be a last resort. Even if Israel wins such a war, thousands of people, both Israelis and Palestinians, will die in it. Additionally, there is no assurance that Israel will win such a war. In 2006, Israel was arrogantly sure that it could wipe Hezbollah out quickly and invaded Lebanon. Thirty days later, Hezbollah had fought the IDF to a draw and the Israelis were forced to withdraw. That was viewed as a terrible defeat here. In 2014, Israel went to war in Gaza. That has not kept Hamas from rebuilding its arsenal, this time with substantial help from Iran.

The IDF, thank goodness, is very good at fighting wars and protecting people. That, after all, is what the military is supposed to do. The problem is that the IDF tends to see military solutions to problems. Similarly, the government tends to focus on military solutions. The IDF keeps retaliating over and over again, apparently expecting different results from the same action. That, as they say, is the very definition of insanity. Until they figure out what Hamas did long ago –- that a large part of the battle is fought in perceptions of people around the world — the alternatives will only be a war and the status quo, both of which are intolerable.