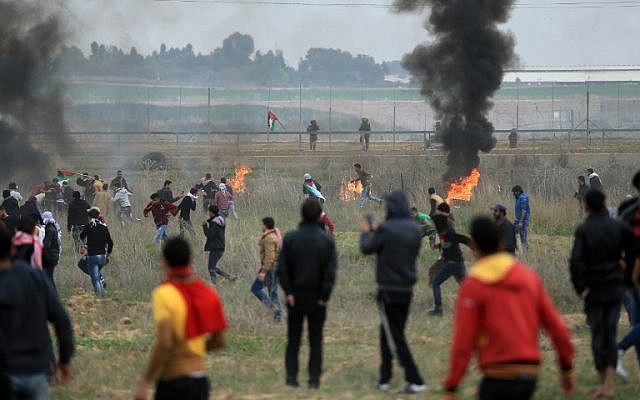 Israeli Defense Minister Avigdor Liberman told Gazans, “You can choose between poverty and unemployment, or work and livelihood. Between hate and spilled blood, or coexistence and personal security. We can be your greatest partners in the effort to turn the refugee camps into the Singapore of the Middle East”.

A typical reaction to statements such as Liberman’s is derision, on the basis that it is crazy to expect Gazans to overpower a dominant and well-funded terrorist organization and replace it with a peaceful government.

Consequently, nothing is demanded of Gazans. They are treated as helpless victims who find themselves in a situation that they have absolutely no control over. Except that this is not true.

Speaking up against the terrorist authorities in Gaza is indeed very dangerous. In June of this year, a rare anti-Hamas demonstration took place in Gaza and was violently repressed by the terrorists. But this is not the whole story. The responsibility of Gazans cannot be erased so easily because many of them contribute directly or indirectly to the current situation.

Gazans, together with other Palestinians, gave Hamas a parliamentary majority in an election in January 2006. Although one could argue that alternative choices were not better and that corruption within Fatah pushed voters towards Hamas, the voter turnout of 74% (despite Hamas’ boycott of the election), with very few spoiled ballots, seems to indicate that Palestinians were satisfied with the choices.

The 2006 election of Hamas was not a mistake that Gazans have learned from, as an opinion poll from September 2017 indicates. In that poll, according to Palestinian Center for Policy and Survey Research (PSR), Hamas is still the most popular party in Gaza, at 41% support among decided voters, with Fatah at 37%, and 12% for all other parties combined. Considering that Fatah continues to proudly fund terrorism, this means that 78% of Gazans support terrorism, even assuming that all the remaining parties do not support terrorism, which is a generous assumption.

Gazan support for terrorists also manifests itself in the fact that Hamas members and other terrorists are Gazans. They live in Gaza, they have families in Gaza, presumably parents, and in many cases wives and children. It is unlikely that these families know nothing about the life of terror of their family members. Middle East Eye reported that, “In 2003, Hamas leaders estimated the number of troops in the Qassam Brigade’s ranks at around 20,000. However, some observers believe it is closer to 40,000”. The size of Islamic Jihad’s terrorist army was estimated at 8,000. It is likely that these numbers are even higher today, probably much higher. If one counts all the family members of these terrorists, these numbers mean that a large portion of Gazans is implicated very directly in terrorism.

The Gaza border riots that started in March 2018 are another indication of Gazan support for violence and terrorism. With the encouragement and often the leadership of Hamas, which calls it the “March of Return”, these riots composed in some cases of tens of thousands of rioters, include the burning of tires and the throwing of rocks, Molotov cocktails, bombs, and incendiary balloons. The size and scope of the riots suggest widespread support within the population.

Consistent with these observations, Jerusalem Post reported that based on a recent survey by the Palestinian institute Arab World for Research and Development (AWRAD), “58% of Gaza residents believe in armed struggle, compared to 37% in the West Bank”.

Although Gazans would have difficulty overpowering Hamas if they tried, there is very little indication that they are interested in trying a more peaceful approach with Israel. The situation of Gaza is deplorable, and the blockade, which is Israel’s and Egypt’s response to attacks from Gaza, is unfortunate. Yet the conclusion that one is forced to draw is that Gazans have brought this situation onto themselves.

If Gazans are to be considered the helpless victims of terrorists, which they currently are not, they have to at least want a peaceful resolution of their current situation. That would be a start.