Alte Gdansky was my great-grandmother on my mother’s side. She was murdered in the Holocaust shortly after the picture below was taken. In honor of Yom HaShoah, I address this letter to her.

Over the years, I have looked numerous times into your resolute eyes as you stood there awaiting the train that would ultimately take you to your death. Many years ago, when your daughter, my Bubbie Chaya Sora Posner, entered Yad Vashem, she saw your picture hanging famously on the wall and cried out “Momma!” and fainted dead away. She identified you not as “a random woman being sent to her death” (as noted on many captions seen online) but rather as a person with a name and a history. 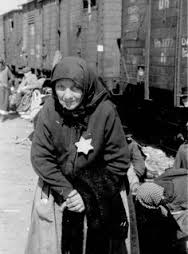 I have looked at this picture hundreds of times over the past 45 years or so. While I have taken a keen interest in Holocaust studies for many years, it is this one picture, the picture of you, my dear great-grandmother, that I associate more with the Holocaust than any other image I have ever seen. That photo is my direct link to the death, murder, destruction and violence that nearly wiped out European Jewry.

What were you thinking at that moment? What happened that day before you were forced to pose for that picture? How much longer did you survive before you had to enter the gas chamber along with so many other victims?

No doubt, one of those who was on your mind at that fateful moment was your daughter, Chaya Sora, my very own grandmother. I was privileged to know your daughter until she passed away a little after my 14th birthday. While parents are always proud of their children, you would have been especially proud of her! Because we lived in Chicago and she lived in Toronto, we did not see each other very often. Yet, every visit was gold and was a treasured memory for me and my family. While you may not be aware of it, your daughter married a wonderful man, my Zedie, Shmuel Aharon and their children and next three generations number in the MANY hundreds of people. You instilled in ALL of us what I see in your eyes in your final picture on this Earth.

I see in your eyes strength, courage, determination and love–lots of love. And it is those qualities that I can tell you, first-hand, have been passed down to your future generations. And for that I want to thank you from the bottom of my heart. I thank you for being a woman who lived by the Torah (as I heard even as a child). Thank you for instilling a love of Hashem in your children, who then passed that love on to all of us.

Bubbie Alte–even though you were murdered at the hands of the Nazis, you can be assured that you still live on; you live on through all of us, who came after you. Hitler (y”sh) tried to erase the Jews from the face of the Earth. I wanted you to know that he failed miserably, as your very own family can attest!

Bubbie, I love you, even though I never knew you. But if a picture is worth a thousand words, then your picture and your life have left an indelible impression on my soul of millions of words and thoughts.

May your memory be for a blessing, along with the memory of all of those who perished in that horrific furnace of the Holocaust.

About the Author
After living in Chicago for 50 years, the last 10 of which Zev Shandalov served as a shul Rav and teacher in local Orthodox schools, his family made Aliya to Maale Adumim in July 2009. Shandalov currently works as a teacher, mostly interacting with individual students.
Related Topics
Related Posts
Comments