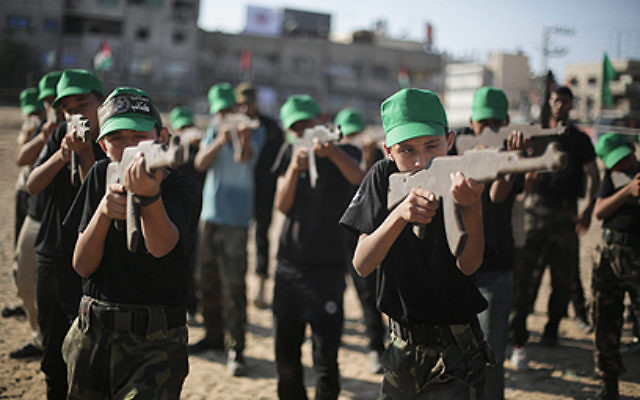 The initial and natural reaction is to reject (or at best, question) such procedures, as they contradict our romantic idea of the innocence and purity of children. However, the sharp and often simplistic criticism directed at Israel ignores the underlying problem.

The question we must ask is: why is Israel confronted with a generation of Palestinian children which exhibits the behaviour of politically radicalised adults and, as a result, poses a potential threat to the security of Israel and the safety of its citizens?

This phenomenon originates in Palestinian society and has become deeply entrenched over time. Children, from the earliest age, are being taught by their families, communities and political establishment to hate Jews and Israel.

An illuminating example is the annual summer camps run by Islamic terrorist organisation Hamas, in which hundreds of thousands of children take part each year. These are not summer camps in any traditional sense but semi-military recruitment centres, where children learn to shoot with Kalashnikov rifles, handle hand grenades, and simulate kidnapping of IDF soldiers. They are being groomed for martyrdom, the accomplishment of which is celebrated in the name of the infinite plight of the Palestinian people.

These brainwashing routines are not restricted to Hamas-ruled Gaza but are practised throughout the Palestinian territories. On Fatah PA TV, cute girls in colourful dresses, with bright smiles, some of them not older than 4 or 5, sing songs in which Jews are demonised as “the most evil among creations” and “wretched pigs”. Others read anti-Semitic poems in which Jews are defamed as sub-humans who mutilate and rape their victims.

Regular visitors of Fatah’s Facebook Page will also be familiar with pictures glorifying violence for children and a recent study of the educational system concluded that 84% of references to Israelis in Palestinian textbooks are negative.

It should thus come as no surprise that the product of this institutionalised hate-mongering is an entire generation of Palestinian children that has been robbed of their childhood, innocence and naiveté. Instead of love, hope and tolerance, their little hearts have been filled with hatred, despair and ignorance and they find themselves violently pushed into the adult world of sordid realities.

Children brought up in normal environments do not judge or discriminate against others based on religion or ethnicity. They are, by nature, curious and want to explore the world around them without prejudices. Children do not typically attach stereotypes to what they see or to whom they meet. They do not feel threatened by differences. They are fascinated and attracted by them.

Radicalism has to be planted in the minds of children, as children are not born as politicised beings. But once affected, they pose a potential threat to “the enemy” just as much as those who corrupted their thinking. In 2012, over 4,370 stones were hurled at Israeli citizens and 1,195 already in 2013 – many by Palestinian children.

Israel’s treatment of young Palestinian detainees is certainly not beyond criticism, and some of it is entirely fair. However, the ultimate responsibility for the violent generation of Palestinian children lies with the irresponsible adults – family members, community and religious leaders and politicians – who put their political goals and ideological imperatives above the well-being of their children.