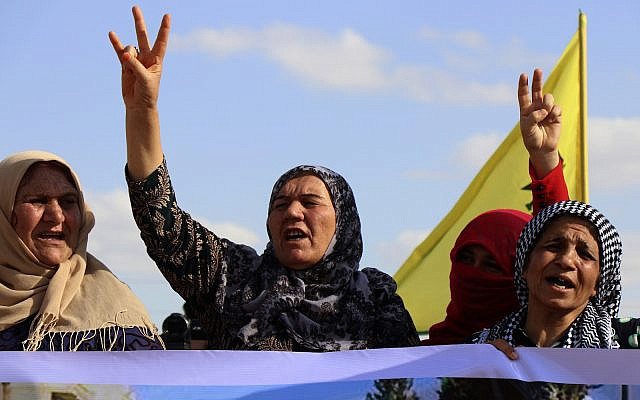 As historians used to say, Erst die Tatsachen, “First the facts.” There are about 25 million people who identify themselves as Kurds (this includes the Zaza, who speak a different but related language, and the Yazidis, adherents of their own particular religion).

Many Kurds believe their nation to be descended from ancient Media: the Medes destroyed the Assyrian capital, Nineveh, in 612 BCE and enjoy a good press in Jewish writings. The apocryphal Tobit and his family settled in Ecbatana, now Hamadan in northwestern Iran. The Ten Lost Tribes were exiled there. The Medes spoke a language of the northwestern branch of the Iranian languages, fairly close to Old Persian, the ancestor of modern Farsi. Kurdish, of which there are several distinct dialects (Kurmanji, spoken mainly in Turkey, is the largest, followed by Suleimani, in Iraq), is correspondingly northwestern Iranian too. Unlike Persian it has grammatical gender, and case endings, and an ergative verb. The common ending of place names –stan is Iranian and means “place where”: Kurds live mainly in the modern states of Iran, Iraq, Turkey, and Syria, with smaller numbers in the Transcaucasian republics of the former USSR: Armenia, Azerbaijan, and Georgia. Kurdistan is the place where Turkey, Iraq, Iran, and Syria meet where Kurds are most numerous.

There was a Kurdish khanate at Bitlis in western Armenia in the 17th century: the epic romance of Mam u Zine, was set down in writing by Ehmed Khani then. But Kurdish social organization remains tribal, as is the case for other Iranian peoples such as the Balochis, relatives of the Kurds who now live to the east of the present-day borders of Iran. Till very recently there was no Kurdish national state, though the Soviets attempted to establish one at Mahabad in Iran after World War II. (The US and Britain forced them to abandon the idea.) Most Kurds are Sunni Muslims, but pre-Muslim practices and beliefs related to the ancient faith of the Iranians, Zoroastrianism, survive in the practices of the fascinating Yaresan and Ahl-i Haqq religious orders or brotherhoods. These also display the strong influence of the Sufi mystical teachings and organization, and some of their rites come from the same sources as ancient Roman Mithraism. Kurds have a rich heritage of music and folklore as well. Kurds have played an important role in the larger history of the Muslim world: the great Saladin, who liberated Jerusalem from the Crusaders, was an ethnic Kurd.

During the Genocide of 1915 the Ottoman Turkish authorities, most of whom were atheist nihilists, were assisted by their German allies to propagandize to Kurds and other Muslims in eastern Anatolia the annihilation of the Christian Armenians and Assyrians as a jihad, a holy war. Many Kurds took part in the state-directed mass murder of their Christian neighbors. After World War I, the Ottoman officer Mustafa Kemal “Atatürk” repudiated Turkish responsibility for the genocide, himself carried out the burning and mass killings of Greek and Armenian Christians at Smyrna (Izmir) in 1922, and violently suppressed Kurdish expressions of self-identity: the Kurds were now designated “mountain Turks”, and their very language was declared illegal. A Kurdish rebellion began in the ravaged, desolate lands of western Armenia, occupied by Turkey, and never ended. In recent decades, the Partiya Kergaren Kurdistan, or Kurdish Workers’ Party, a Marxist-Leninist organization, led the armed struggle on Turkish-held territory. In Iraq, the late and unlamented Saddam Hussein killed tens of thousands of Kurdish men, women, and children with poison gas. The PKK’s methods were violent, but other Kurdish civil and military organizations are much less so and disavow terrorism of any kind.

In 1997 I was in the ancient Armenian city of Van, on Turkish-controlled territory. My friend, Armen Aroyan, was filming my lecture-documentary on the Church of the Holy Cross on Aght’amar island. The church, a precious and unique monument of the 10th century, had been severely vandalized since my last visit, three years earlier, clearly with official complicity. Several well-dressed, polite college students approached me and asked in perfect English if I might meet them later to tell them a bit about Christianity and Armenian history, of which they were taught nothing in Turkish schools. They came that evening to the restaurant where our group were dining. They were Kurds, of course. Some months later I received a letter in an envelope whose printed return address was that of a bank in Van. After we met you, the handwritten letter read, we were arrested and tortured by MIT, the Turkish secret police (not, alas, the Massachusetts Institute of Technology), for having spoken about Armenians. But we don’t regret it, and thank you for meeting us. We hope this letter reaches you.

The world does not help targets of genocide: nothing was done to save the Armenians, and the United States and Israel, among others, still do not recognize officially that their genocide, the precursor and model of the Holocaust, happened at all or should even be called “genocide”. (It was Raphael Lemkin, a Polish Jewish lawyer, who coined that term, with specific reference to the Armenians.)

The perpetrators of the Holocaust enjoyed active local collaboration in most of Europe, the Allies treated the horror with inaction and indifference, and anti-Semitism is every bit as virulent today as it was on the eve of the Second World War. Since then, there have been more genocides: Biafra, Cambodia, Rwanda. No one has done anything except to lament afterwards— while the Rwandan slaughter was going on, Clinton ordered the reports kept from his desk so he could claim plausible deniability, as these bureaucrats of the devil put it. Afterwards he said he was sorry. China does what it wants with Tibetans and Uighurs— but then in its proud seventy years the “People’s Republic” has with its Great Leap Forward, Cultural Revolution, and so on decimated the Han Chinese people, too. It’s equal opportunity genocide, like in Stalin’s day.

After the American invasion of Iraq, the Kurds set up a semi-autonomous republic in the north of the country. They officially acknowledge the Armenian Genocide. They promote Syriac, the Aramaic dialect used by Assyrian Christians, as a twin official language. They forged friendship with Israel and opened their arms to the huge, vital Kurdish Jewish diaspora. They and their compatriots in Syria bore the brunt of the fighting and dying to defeat the hideous cancer of ISIS/Daesh. Iraqi Kurdistan is a prosperous, democratic, decent society where women don’t have to be veiled if they so choose. It has good colleges. It is what a healthy, happy Middle East can and should be.

And now the mercurial, erratic Mr. Trump, with all the care and forethought of a tweet (it’s not for nothing that English has the idiom “bird brain”), has withdrawn US forces from the border areas of Syria and abandoned America’s decent, democratic, pluralistic, secular ally to the tender mercies of the Islamic Brotherhood’s tin pot tyrant in Turkey, Erdogan. Yesterday the Turkish air force attacked Kurdish cities and towns across Syria, bombing civilians. Today, as I write, tens of thousands of Kurdish families are fleeing as their homes burn. Various world leaders sit on their hands and express polite distress, and the US administration is as usual in confused disarray as America lets down an ally once again. The Iran and the US supported the Iraqi Kurds once upon a time, when the two powers were allies— but the Shah and Kissinger let them down. So it’s nothing new. Betrayal is as old as the Crucifixion.

Kurdistan, abandoned again, faces genocide at the hands of a murderous, practised, unrestrained enemy. If I were a younger man I’d go and fight alongside them. My Dad, who is 92, had the honor to serve in the United States Navy in the Second World War. I’ve not had the chance to bear arms against fascism. And no, the pen is not mightier than the sword — this will be buried among the many other verbose blogs of the Times of Israel’s armchair jeremiahs. But the Turkish invasion of Kurdistan did happen on a particular day, Yom Kippur, when the Master of the Universe renders judgment upon His creation. If nobody else listens, He will. Ana Adonai hoshi’a na! Please, O Lord, please save us. And as Americans used to say, Praise the Lord and pass the ammunition. God bless the defenders of free Kurdistan.

About the Author
James R. Russell is Emeritus Professor of Armenian Studies at Harvard University, and has served as Distinguished Visiting Professor of the Hebrew University of Jerusalem, Associate Professor of Ancient Iranian at Columbia, and part-time Lecturer in Jewish Studies and Biblical Hebrew at California State University, Fresno. He is at present Adjunct Professor of Iranian Religions at the Daneshgah-e Adyan va Mazaheb, Qom. He is on the Editorial Board of the journal Judaica Petropolitana, St. Petersburg State University, and a founding member of the International Association for Jewish Studies, chartered in the Russian Federation. His PhD is in Zoroastrian Studies, from the School of Oriental Studies of the University of London. His recent books include "Poets, Heroes, and Their Dragons", 2 vols., UC Irvine Iranian Series, 2020, and "The Complete Poems of Misak Medzarents", CSU Fresno Armenian Series, 2021.
Related Topics
Related Posts
Comments