The Blogs
Aaron Leibel
Apply for a Blog
Please note that the posts on The Blogs are contributed by third parties. The opinions, facts and any media content in them are presented solely by the authors, and neither The Times of Israel nor its partners assume any responsibility for them. Please contact us in case of abuse. In case of abuse,
Report this post.

Former Secretary of State George Shultz, who died this week at 100, was a friend of Israel and the Jewish people and worked hard to achieve peace between the Jewish state and its neighbors. He also inadvertently played a role in putting bread on the Leibel’s table in Jerusalem during the mid-1980s.

As you’ll learn when you read Figs and Alligators, my memoir of life in Israel during the 1970s and 1980s, I was an editor at The Jerusalem Post during that period. In addition, I freelanced for the Middle East Times, owned by the Unification Church (also called “Moonies”), which also controlled The Washington Times. My salary at The Post was minuscule and like almost all the reporters and editors at the paper, getting work on the side kept that legendary wolf from the door.

MET, out of Cyprus, was a regional, English-language publication that was sold throughout the Arab world. As such, the paper wasn’t wildly enthusiastic about the Jewish state but accepted it within pre-1967 borders.

As the paper’s man in Israel and the West Bank, I interviewed various people in both the Israeli and Palestinian communities for articles I did for MET.

Unfortunately, getting an interview with the American secretary of state — really, any foreign minister — was mission impossible for anyone working for such a small publication.

So, during Shultz’s visits to the region in that period, I wrote analyses of his trips from afar. Let me tell you, writing articles with a fresh perspective about frequent visits that always began with hope and ended with frustration strained my imagination to the fullest.

But realizing that my three hungry daughters were depending on me inspired me to keep on writing.

This week, I learned two things about this leader whom I admired from a distance. First, Shultz was a mentor to former Secretary of State Condoleezza Rice, as she discussed in her Washington Post oped and that after he stepped down as secretary of state, Shultz co-founded the Israel Democracy Institute and served as the IDI’s honorary chairman until his death.

Earlier in his career, Shultz had been secretary of labor and the treasury and director of the Office of Management and Budget. Those positions were fitting for someone whose training was in economics, but to lead America in the international arena with a background like that is quite unusual.

George Shultz was a remarkable person. He will be missed.

Reminder: Don’t forget to register for the Zoom Book Party for my memoir, Figs and Alligators: An American Immigrant’s Life in Israel in the 1970s and 1980s by clicking on https://www.htaa.org/event/AaronsBook?fbclid=IwAR1kqdTpsfoVo9pQq5xof2diA-CH9CEDXg75-iAYTWWl7e7fvmoR5KknWEw. See you March 7 at 11 a.m., EST.

About the Author
Veteran journalist Aaron Leibel, winner of two Rockower Awards for Excellence from the American Jewish Press Association, writes regularly for The Jerusalem Post and Washington Jewish Week. His acclaimed memoir of Israel, Figs and Alligators, is available at every local bookstore in the U.S. and Canada, from Barnes and Noble, and from Amazon in Kindle and paperback.
Related Topics
Related Posts
Comments 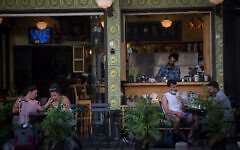 Israel reopens: All the new rules from March 7
TOI staff