You can’t escape it: It’s as if the only colors God created in the world were red and green. And the music is everywhere: in the malls, restaurants, offices, blasted out in the streets and through the earphones of walkers, bicycle riders, and passengers in the next seat on the trains and planes. And each year it begins earlier and earlier. (Rumor has it that it is being pushed back to Shavuot in 2019.) 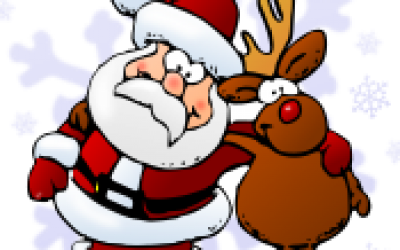 I know my friends who have made Aliya are relieved that they are spared this annual sensory overload.

Personally, I have no problem with the music of other religions. In my own life – like many Jewish children in the South – we had Ethel French, a black woman, descendant of slaves, who worked for us, and along with my parents, really raised me. I remember going to church with her a few times, especially on Mother’s Day after my own mother died. I like gospel music – and share with many Jews a certain in-the-back-of-our-minds jealousy that in our synagogues there should only be as much kavanah in the davvening.

As to the music of the season, we, who were raised on the poetry of Paul Simon and Bob  Dylan, the lyrics of some of the songs are downright dreadful. This incongruence between the meaning of the holiday and some of the lyrics reminds me of Mark Twin’s famous comment about cats on his back fence caterwauling away, “It’s not their noise that bothers me, it’s their terrible grammar.” And worse — some of the simpler tunes have been wretchedly re-worded as to become advertisements for Walmart, CVS drugstores, and other businesses.

The Jewish Elements:
No, it’s not that Dasher’s and Prancer’s and Blitzen’s names were changed along the way from Shraga Feivel and Krayna and Shepsel. There is no historical evidence to support that wild speculation. They did not come through Ellis Island and face a hard-of-hearing immigration agent taking down their information who changed their names.

But, as Jews, I am sure many of us are sympathetic to our Christian friends and neighbors – and saddened – by their being swept up in the outrageously expensive and addicting commercialism of it all. I suspect that for many of them, it is only with a concerted effort that they succeed in summoning up the religious message and the deep, happy memories of the family together of years past.

And as far as Mitzvahs go, many Jews feel a justifiable need to offer gifts to those unfortunate workers – waitstaff at restaurants, ticket agents, pilots and crews on the
planes – who do not get the day off. (Years ago, I flew to Maui on Christmas day, changing planes at O’Hare. The airport sounded like a giant Chevra Kadisha room. I remember buying a box of candy and distributing it to those people forced to work on their chag.)

Santa’s Torah: It’s staring right in front of us and stuck deep in our ears from the
repetition the song about that poor nebach Rudolph. All The other reindeer laugh, call him names, and won’t play with him because of his physical abnormality. Real bullying! He is excluded from the chevra, ostracized, isolated and alone. I don’t know the Latin medical term for a shiny red nose, though I have checked in my Stedman’s Medical

Dictionary. I suspect, however, that it is not contagious, terribly toxic, malignant or likely to metastasize inviting the Malach HaMavet to breathe down her gorgeous furry neck. The solution and Baruch HaShem the happy ending is — and I believe the message for all of us — that it is Santa Claus, the Rebbi, who saw how intolerable the situation was, and not only embraced poor, lonely Rudolph, but made him a critical part of the entire December 24 th adventure, Santa’s GPS, as it were. Without him, millions upon millions of kinderlach would not get their toys because the sleigh would be wandering ahin and aher, lost in the sky, surely without any time to spare on wrong turns. This is the happy Jewish-values ending: Cupid and Comet and Donner and the rest of them, come to their senses, their consciousness is raised, their reindeer-Menschlichkeit comes out, and, I suppose, they all lived happily ever after.