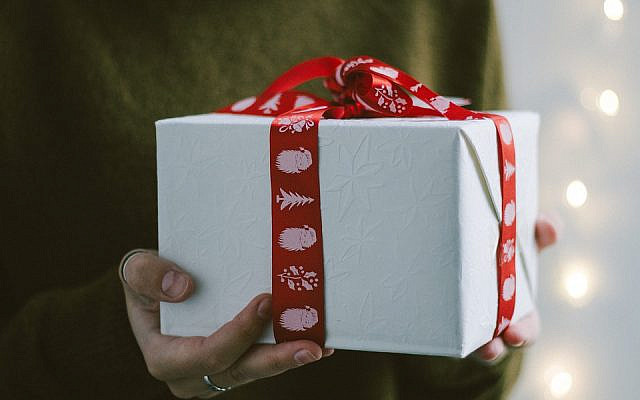 Ahead of the epic meeting of brothers, Jacob sent his older brother Esau quite a generous tribute, consisting of 550 animals. The Torah uses the word mincha four times when referring to this gift (Gen. 32:14, 32:19-22). The word mincha is one of many Hebrew words which mean “gift” or “present”. In this week’s essay we will discuss six such words: mincha, matana, shai, teshura, eshkar, and doron.

The word mincha is the most common of these six words, and appears more than two hundred times in the Bible. Rabbi Samson Raphael Hirsch (1808-1880) explains that a mincha is a gift of homage, by which the giver shows his subservience to the receiver. This type of gift serves the interest of the giver in demonstrating his dependency on the receiver. Alternatively, as Rabbi Shlomo Aharon Wertheimer (1866-1935) notes, a mincha helps the giver achieve atonement.

Rabbi Yaakov Tzvi Mecklenburg (1785-1865) writes that a mincha can also be a tax or a tribute that a servant pays to his master, like the case of the subjugated Moabites who paid a mincha to King David (II Sam. 8:2), or like the last King of Israel, Hosea, who paid a mincha to his Assyrian overlord (II Kimgs 17:3). According to Radak and others, the root of the word mincha is nach/nacha (“placed” or “rested”), because the giver uses this gift as a means of calming or placating the recipient.

Rabbi Mecklenburg further writes that the more one shows submission to another, the more it can be termed a mincha. To that effect, he explains that the afternoon prayers are called Tefillat Mincha because during that time the sun is on its way down. This demonstrates the sun’s submission to G-d, as though it were bowing to Him. Similarly, when a poor person brings a meal-offering as a sacrifice, that sacrifice is called a Korban Mincha. This is because the penniless worshipper very clearly demonstrates his submission to G-d by showing that he is willing to offer Him whatever little he has.

Rabbi Wertheimer explains that the word matan or matana (variations of which appear some twenty times in the Bible) is a gift which focuses on giving. In fact, the root of those words is the same as the verb of giving. In English, too, the words gift and give are of the same etymology, for the f-sound and v-sound are interchangeable. One gives a matana when the recipient needs something and the giver enjoys no benefit from offering this gift other than that he has donated to fill the receiver’s need. This type of giving encourages friendship and camaraderie — which is why it is mandated on Purim (see Esther 9:23, which calls for matanot la’evyonim, “gifts for the unfortunate”).

Interestingly, Rabbi Mecklenburg writes that it is inappropriate to use the term matana when discussing an offering to G-d, but he does not explain why. In light of the above, the explanation seems obvious: a matana serves to fill a certain need on the part of the recipient. In the case of G-d, He is complete and has no needs, so He certainly does not require any sort of gift. For this reason, sacrifices to G-d are never described as a matana in the Bible.

The next most-common word for a “present” in the Bible is shai, which appears three times (Isa. 18:7, Ps. 76:12, and Ps. 68:30). Rabbi Avraham Bedersi HaPenini (1230-1300) writes that the word shai is yesh (“has” or “is”) backwards, because a shai is an especially substantial gift. Rabbi Wertheimer explains that shai refers to a gift which the giver considers significant, but for the receiver is not so special. For this reason, whenever the word shai appears in the Bible it refers always to giving a gift to G-d, and does not appear in any other context.

The word eshkar appears twice in the Bible (Ps. 72:10 and Ezek. 27:15), but is nonetheless quite obscure. In fact, Radak writes that he is unsure of eshkar’s root — whether all four letters of it make up its root (ALEPH-SHIN-KAF-REISH) or only the last three letters are its root (SHIN-KAF-REISH refers to “beer” or “drunk”). Rabbi Avraham ben Chaim Ibn Ramoch differentiates between mincha and eshkar by writing that mincha is something like gold, silver, and precious gems, while eshkar is special types of fruits. He does not explain the logic between the distinction between these two terms, but it seems that the former refer to inedible gifts, while the latter are only edible gifts. This might explain the connection between eshkar and sheichar.

Rabbi Wertheimer takes a different approach. He explains that eshkar refers to a gift whose value is not in its monetary or utilitarian worth, but in its aesthetic qualities. Such a gift “bribes” the recipient, so to speak, into overestimating its own importance. In doing so, this sort of gift effectively renders the recipient intoxicated (shikur), such that he cannot properly focus on the gift’s true value. Interestingly, Malbim writes that eshkar is related to sachar (“reward” or “payment”), with the letter SHIN morphing into a letter SIN.

The last Hebrew word for “gift” which we will discuss for now is teshura. This word is a hapax legomenon in the Bible, which means that it appears only once in that entire text (I Sam. 9:7). The Midrash Shocher Tov (Psalms 87) expounds on the word teshura,explaining that it is the type of tribute which “people look at and sing praises”. Rabbi Wertheimer explains that the Midrash understood that the root of the word teshura is two-fold: It is derived from shur — which is a type of “seeing” — and from shir — which is a “song”. Teshura denotes the most honorable, flashy, and eye-catching present possible.

Malbim explains that teshura refers specifically to a present that is given when one greets an honorable figure. In a way, it is a type of mincha. When one would meet with a prophet or holy man in order to receive his blessing, or to consult with his prophecies, one would present the eminent personage with a special gift in order to cement a bond with said person. The purpose of this gift is to placate the receiver’s physical body. This would then allow the receiver to transcend his physical limitations and allow an outpouring of his spiritual influence onto the giver, whether for the purposes of prophecy or blessings. By creating this bond, the receiver could now become a conduit for G-d’s blessing to the giver, thereby making the receiver a giver, and the giver a receiver. This, of course, is why Isaac requested that Esau present him with a delectable meal before he would bless him (see Gen. 27).

Our final word for “gift” is not actually Hebrew, and does not even appear in the Bible. Targum pseudo-Jonathan generally translates the Hebrew text of the Bible into Aramaic. When discussing the “gift” that Jacob sent Esau, Targum pseudo-Jonathan translates the word mincha asdoron. However, doron is not Aramaic. As Rabbi Eliyahu HaBachur (1469-1549) observes in Sefer HaTishbi, the word doron is actually Greek for “gift”. So, even though Doron sounds like a manly Israeli name, it comes from Greek. Doron is actually closer in meaning to the name Theodore (“G-d’s gift” in Greek), which parallels the Hebrew name Yonatan (“Hashem’s gift”).