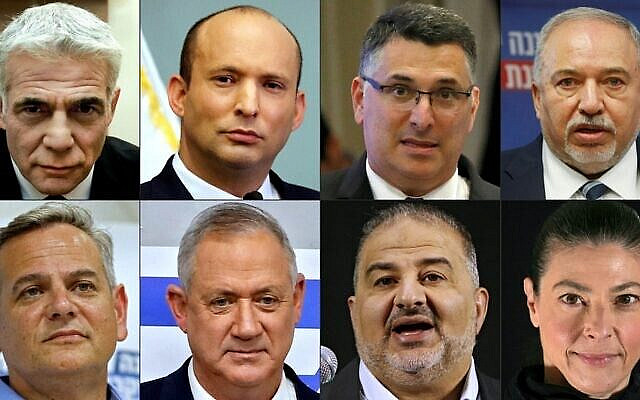 "Mr. President, I am calling you to tell you that I have succeeded in forming a Government" (Courtesy of Times of Israel.)

To my Religious Zionist friends and colleagues – and adversaries, I am extending my hand across the divide.

In 2020 when Benny Gantz crossed the lines to join a Netanyahu emergency government, he was hailed by you as a courageous man who took a political risk to place the country’s dire needs and interests before his own.

The situation in Israel today is no less dire – if not more so – mainly because of the political uncertainty fomented and fostered by Netanyahu.

Each rejects the other. Lately, this has gotten worse where personal threats and the intimidation of politicians’ families and young children have become “acceptable means of pressure” and nobody, especially not Bibi, publicly condemns it.

The incitement is reaching explosive levels with the demonization of Bennett and Shaked, and the blanket rejection of Arab parties, just because they are Arab parties.

And yet, suddenly, Bennett’s decision to form a unity government is greeted with cries of “traitor”; not of how he is putting the interests of the entire country before his own – which is what a Prime Minister should do, because he must represent all of Israel’s interests – although, after 12 years of Bibi, we have forgotten that – but we are being told that he has betrayed his voters. And most absurd and hypocritical, is that the people who are saying that, are mostly politicians who don’t even BELONG to Yamina, and they are telling Yamina voters what they should think and do!

Which begs the question: Why was Gantz’s move considered a great and noble sacrifice for the country’s good, but Bennett’s is considered treachery and betrayal? Is it because you didn’t really see Gantz’s move as noble, but you approved because it allowed you to continue to implement your agenda unhindered, which is all you cared about?

Look; The country is torn apart, and we are all victims of Bibi’s incitement. He has been pitting us against each other so that he can continue to rule for years. For the last 5 years, he hasn’t even tried to be Prime Minister for everyone, but only of his base. And his coalition allies have supported him and excused his corruption because it served their purposes and agenda and made him vulnerable to their extortion.

We have stopped talking to one another. We now shout at one another and hurl insults. We are stuck in the Cancel Culture of identity politics, where you are defined first and foremost by whether you are perceived as Right or Left and not what you say. We judge without even listening to what we and you are really trying to say.

Look; I know that the power you have enjoyed and the influence you have had is addictive and hard to give up. I know that losing the luxury of having the power to further your ideological aims is frightening for you. I know that political enmity is an easier road to take than examining one’s own values, to strengthen the cohesiveness among those who think the same as you. As it is for us, too.

We need to start to close the chasm, to heal the open wounds that our ravaged country carries.

We need to build trust and to put our political differences back in their rightful place; coming AFTER the acceptance that the health of ISRAEL comes before our partisan political aims.

We need that it is not our confrontations that define the country, but us caring about the inclusive fabric of our society and what our country needs, which should act as a moderating factor that defines the boundaries of our confrontation. And perhaps even swapping it for cooperation.

We must get to a point where can accept that strength comes from diversity, and we can realize that unity is not the same as uniformity, and that we strive for the former.

This is what the Government of Change offers us; a chance to put our country first and back on track.
A chance to douse the flames of acrimonious division that is threatening to tear us apart and pit us against each other.

But, to do that, we need to remove the poisoning agent from the mix – and that is Bibi and those in the Likud who do his bidding.

Nobody is asking you to abandon your ideology, but rather to temper it for the good of ALL of Israel.

Give it a chance. You may well be surprised by how good it might be, and what we can do TOGETHER.

For Am Yisrael to Hai, we have to live here, together.