The Blogs
Sally Berkovic
Apply for a Blog
Advertisement
Please note that the posts on The Blogs are contributed by third parties. The opinions, facts and any media content in them are presented solely by the authors, and neither The Times of Israel nor its partners assume any responsibility for them. Please contact us in case of abuse. In case of abuse,
Report this post. 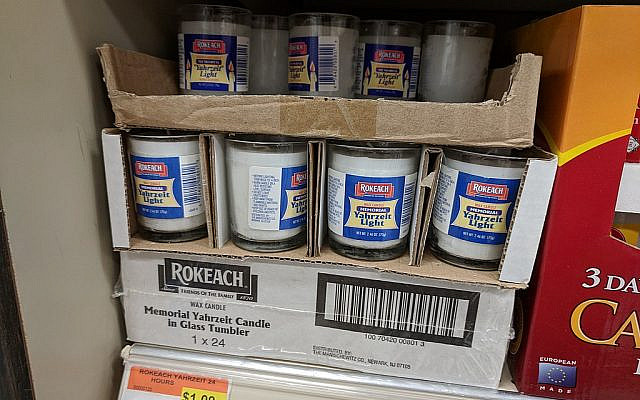 Sholem Aleichem suggested a unique yahrzeit ritual for his family:

At my grave, and throughout a whole year, and then every year on the Jahrzeit, my remaining son, and my son-in-law, if they are so minded, should say Kaddish after me. And if they do not wish to do this, or if they have no time for it, or if it be against their religious convictions, they can be absolved from this duty only if they all come together with my daughters and my grandchildren and with good friends, and read this my will, and also select one my stories, one of the really joyous ones and read it aloud it whatever language they understand best, and let my name be mentioned by then with laughter rather than not be mentioned at all.

Shavuot ushers in my ‘Giving of the Yarhrzeits.’  Frankly, I fail to focus on the ‘Giving of the Torah’ as I am all farklempt thinking about the upcoming yahrzeits – for my mother this week, my younger brother next week, and for my father in two weeks. And to add insult to injury, in April 1944, my father and his family were deported to Auschwitz on the second day of Shavuot and he never saw his parents or younger siblings again. Shavuot became the day my father and his surviving brother observed their family’s collective yahrzeit. As neither of them are still alive, I feel that added layer of remembrance responsibility.

Caught between private sorrow and communal performance, the annual day for remembering a loved one is the day to tell their story. The Yahrzeit [in Yiddish] or Nachalah [the Hebrew term used by Sephardim] is a powerfully focused day of personal reflections and customs include lighting a memorial candle at home, saying psalms, offering charity and visiting the deceased’s grave.  At the same time, it requires a community for the public recitation of Kaddish, the mourner’s prayer. The yahrzeit is a bridge between the world of the dead and the living.

In advance of the ‘Giving of the Yahrzeits’ I have carefully orchestrated my attack, planned months in advance. I must get to the synagogue in the evening and the morning, so I make sure my diary is cleared of any travel. I don’t plan any late work meetings and of course, I know I’ll have to make up my early morning gym session later in the day.  I spend a lot of time looking at old photos, re-reading teenage diaries, trying to reconstruct the lives of those I can no longer ask. However, while I think I’ve been what Winnicott calls the ‘good enough’ mother, I’m not sure I’ve been the ‘good enough’ legacy of my parents.

In this iterative era of Zoom Judaism, yahrzeit has been the poor relation. Understandably, the focus has been zoom funerals and zoom shivas to help people process their grief during such a difficult time. Hesped.org which hosts eulogies from Jewish funerals has highlighted the relevance of chronicling people’s lives at a time when technology is both pervasive yet ephemeral.  The recital of kaddish over zoom has been debated, and in the UK, the Chief Rabbi has decreed it is not halachically acceptable. Some who need to recite kaddish daily have accepted this ruling and others have joined an alternative minyan that allows saying a virtual kaddish. Zoom Judaism enables mourners to access a global community and find a shul to meet their psychological and spiritual needs when their local one falls short.  While many mourners are dedicated to their three times a day kaddish for 11 months, it is also true that many cannot fulfill this time-consuming obligation and over a long stretch, they make peace with an occasional missed kaddish.

In contrast, yahrzeit only happens once a year, and as long as minyanim cannot be held in most countries outside Israel, more and more people will not be able to say an in-person kaddish that anchors their year. It is the yahrzeit kaddish that brings men, and increasingly women, from across all levels of Jewish practice, to the synagogue. I belong to an Orthodox community where women are encouraged to say kaddish, but even so, I still have a nervous quiver in my voice and sweaty palms as I turn the pages of the siddur in anticipation. It’s as if I bring all my childhood to bear as the words tumble out of my mouth, conscious of the embarrassment if I stutter or stumble on a word.

Stonemasons have been unable to erect physical tombstones and hundreds of families have delayed consecration ceremonies until further notice. In Israel, the ‘stone-setting’ is often done within the first 30 days since the funeral, however, outside Israel, this ceremony is usually held just before the first yahrzeit, physically representing a transitional moment between the darkest days of raw grief and the light emerging as grief morphs into a different form of longing.

I’ve been wondering: are we ready for a digital tombstone to mark a yahrzeit during Corona times? Historically, tombstone iconography is replete with hands: a Cohen with his hands  spread out symbolising the priestly blessing;  a woman’s hands splayed to bless the Sabbath candles and a well-known charitable person with hands poised above a tzedakah box.

The ultimate 2020 headstone?  Surely, it will be hands wrapped tightly around a mobile phone.

About the Author
Sally Berkovic's latest publication, Death Duties, focusses on her involvement with the Chevra Kadisha, interweaving her own experiences of mourning and loss. It can be accessed freely at https://sallyberkovic.files.wordpress.com/2021/06/death-duties-sally-berkovic-june-2021-1.pdf He book, Under My Hat is available on Amazon.com and fishburnbooks.co.uk A mix of memoir, sociology, history, and acute observations focusing on Orthodoxy and feminism, this 2019 edition includes a new, 75-page introductory essay reviewing the extraordinary changes in Orthodox women’s lives since the book was first published in 1997. Her writings are on her site https://sallyberkovic.com/
Comments