Golda Meir has been with me a long time. It seems like she follows me around. Maybe I’m following her. 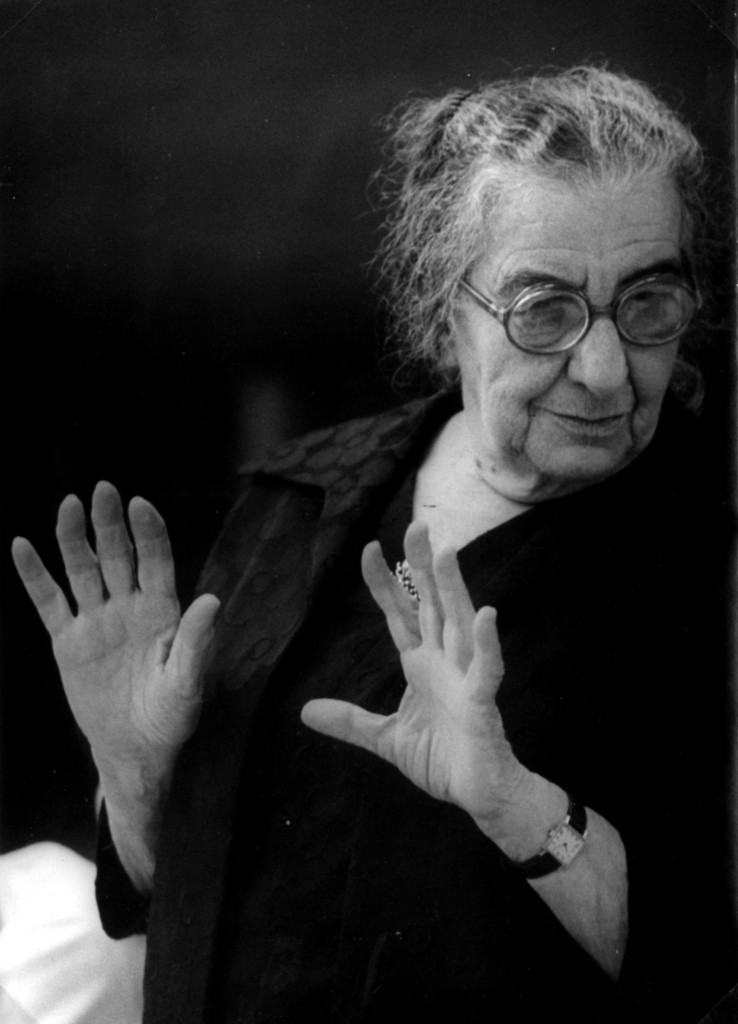 My favorite photo of Golda (PikiWiki)

For me, Golda is a symbol and a metaphor — a mildly dangerous spiritual godmother.

Maybe it’s not fair to do that to someone. There must be Israeli readers who would prefer an article about her relationship with Moshe Dayan or her attitude toward Sephardi immigrants. (Since our Dominican priory in Jerusalem is near Musrara and “Hem lo nechmadim” Alley, I am not unaware of certain tensions.)

But no one could spin an aphorism like Golda. No one has ever orated like her. She stood for something — and she did it, in two languages, in a distinct Milwaukee accent.

Golda walked with me near her school across from the old Schlitz Brewery. The place still smells of malt.

There is actually a long-rooted Jewish community in Milwaukee, and even a Hasidic neighborhood, clumped around the Twerskys, which happens to be right next to where my parents live (When I once told Mom what tzitzit were, she said, “Oh, sure. Kids in the grocery store have those”). But Milwaukee seems mostly disconnected from Planet Israel — until you find the wormhole.

That link is Golda Meir — or, as we knew her, Goldie Mabovitch. Goldie was brought to Milwaukee from Kiev at age eight. She made aliyah at 19. Goldie from Milwaukee. Who remembers her now?

It starts, and we see Bergman in a wooly wig putting out a cigarette in her car. She clomps into an auditorium in the celebrated orthopedic shoes. An old upright thrums over the linoleum. It’s Hatikvah. Schoolkids, almost all of them black, stand and sing in Hebrew to Golda. This actually happened.

That’s not the only trace of Golda in Milwaukee. There’s a university library named for her, for instance. Her high school, where she first joined the Labor Zionist youth movement, still stands at Tenth and Center. But of course most have forgotten her.

Golda stood with me in the slush on the sidewalks of Kiev.

The neighbors are nice to her now. You can find a plaque near her birthplace, next to a shoe store on Basseynaya Street. If you go in January, as I did, wear a hat.

A century ago, Golda did not enjoy Kiev. Her most powerful Kiev memory, she wrote, was of her father boarding up their door to keep back rioters in a pogrom.

Would she have been what she was without that trauma? She says, in My Life, “To me, being Jewish means and has always meant being proud to be part of a people that has maintained its distinct identity for more than two thousand years, with all the pain and torment that has been inflicted upon it.” Say what you will, she had guts to an almost perverse degree (not a Midwestern trait, but — if one may be permitted to suggest — very Israeli).

Golda’s zeal for her people carried her straight into the steaming chicken coops of a Galilee kibbutz. But, within a few years, she was working for the Histadrut. Then she was signing the Declaration of Independence.

She wrote: “After I signed, I cried. When I studied American history as a schoolgirl and read about those who signed the United States Declaration of Independence, I couldn’t imagine these were real people doing something real. And there I was sitting down and signing the declaration.” Golda was a long way from Milwaukee. She got there because she wanted something — intensely. Wanting itself takes guts.

Golda was with me in the sun on a piney hill in Jerusalem.

The third time I visited the Holy City, I got on the trolley and zipped by the old walls in the air-conditioned tube. I got off at the end of the line: Mount Herzl. At the highest spot among the graves, on a square of white pavement, a black granite slab: hay, resh, tzadi, lamed — Herzl. Not her.

But down a path, there’s a low stone marker. It’s not grand. It’s Goldie.

How did Goldie get to a plot under the cedars? She pushed. She had convictions — as people used to say, and rarely do now. And she had hope: “We will build Israel with decency and dignity, and one day our present detractors will come knocking at our door.” The decency is very Milwaukee.

I can’t speak for Israel, but Milwaukee could use more like Goldie Mabovitch.