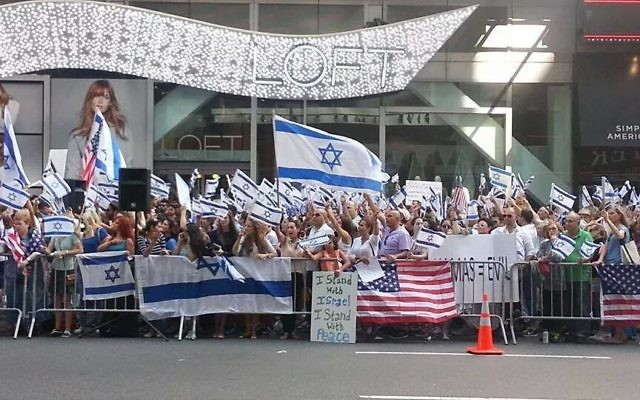 Everyone, even the youngest child, understands the fundamental differences between good and evil. It is represented in our literature, in our history books, in our philosophies; we have fought it on the battlefields of war, and in the battlefields of our minds. Often it is the very presence of evil that makes goodness so clear-cut. More often than not, however, there are murky shades of grey that make every side simultaneously wrong and right.

Fortunately – or quite unfortunately, depending on how you look at it – the mask concealing evil in our time is being removed, making it quite easy to discern. It presents us with a moral choice: Evil or fighting Evil. There is no neutral. To be neutral, silent, impartial… is to choose Evil by default. Allowing Evil to flourish in our midst by abstaining from acting against it is no better than taking an active part in it. So, I’m afraid, you must choose.

This is about Hamas. And Hamas is evil. Did you catch that? Hamas. Is. Evil. There is nothing murky or grey. Read their charter. They don’t even pretend to be something different. They call for the destruction of Israel, and the murder of Jews.

It’s actually quite fascinating – and terrifying – to read through their charter. Lines such as:

Israel will rise…until Islam eliminates it…

There is no solution to the Palestinian problem except by Jihad.

The part about eliminating Israel is not a minor detail, a secondary clause… it IS the charter. Thirty-six articles and it’s entirely about the goal of destroying, eradicating Israel. If it weren’t so deadly serious I might have chuckled at the part about B’nai Brith being a ‘destructive spying organization’… blaming such clandestine efforts such as the establishment of the United Nations in part on this ‘rogue’ organization.

But perhaps I have not made myself clear… Let’s take a look at what’s happening:

There are those who are comparing Israel to Nazis; that we are committing genocide to the Arab population in Gaza. Nothing is further from the truth or more ridiculous. NEVER BEFORE has an army taken such extreme precautions NOT to kill civilians, and this is with Hamas trying to foil our attempts at saving their citizens’ lives through the use of human shields.

We call them, text them, send SMSes… we practically sabotage all of our own efforts to actually hit what we’re aiming for just to save lives. We value life more than anything; ours and theirs.

How does Hamas respond? By telling people to ignore the warnings. By telling people to remain where they are.  By keeping them in the line of fire. Hamas philosophy is that either we will not fire because of the people, thereby protecting whatever weapons or other target the IDF is aiming for, or we will fire and Hamas will claim ‘genocide’.

Tell me this is not evil.

For those who cannot help but see the devastating images of war in Gaza and feel appalled, I will tell you this: I, too, am appalled. The people of Gaza are hostage citizens to a demented regime of hate. Their children are taught to hate. The children’s shows they watch teach them the value of killing Jews. While Gaza has received huge amounts of money and materials from the United States, United Nations and European Union, it is not used to build their society but to plan for the ‘eventual destruction’ of Israel. But of course that’s what it’s used it for; that’s the raison d’etre of Hamas. They aren’t even shy about it. There are no euphemisms in their charter. It says it all straight out. This. Is. Who. They. Are.

And so we must fight this evil. We must do whatever we can to remove the very real threat of having missiles raining down upon our cities. We must remove the terror of millions of our citizens who must run to safe rooms or take cover wherever they may be when rockets are fired indiscriminately at them with the intention to kill. We must go through the painstakingly difficult and dangerous task of destroying the incredibly sophisticated and intricate tunnel network that was designed to hide people and weapons, kidnap Israelis, and infiltrate Israel. We must do this by bringing our soldiers into Gaza and putting their lives at great risk because the only other way – bombing from the air – will put Gaza’s citizens at great risk.

The world must fight this evil as well. At the very least it must ascertain that what it supplies for the betterment of Gaza’s people goes for just that; and not into the coffers of the ever-richer Hamas leadership, or to the continuous stockpiling of Hamas weapons and terror infrastructure.

Yesterday In France, near my home town, demonstrators put a banner on a bridge. It said: "DEATH TO JEWS", and was followed by two Swastikas.

All over the world we have seen a great deal of emotional reaction to what is happening now in Israel and Gaza. There have been pro-Israel rallies and, alarmingly, increasingly violent pro-Hamas rallies. Jews and Israel-supporters have been attacked, synagogues and other property burned, and people threatened with violence and death. I have been threatened personally, several times, on both Facebook and Twitter. I can’t even kill a spider. It doesn’t matter. I am Israeli, I am a Jew; therefore I am a target.

What it comes down to is we have no choice. We are fighting an evil in our midst and a toxic hatred that has existed for millennia but is now being fueled by Hamas. We know we cannot eradicate the evil which is only a drop in the Islamic extremist/Jihadist bucket, but we must do what we can to protect our citizens and keep things under control. It is the very least we can do.

Which side are you on? Good or evil? We are fighting to defend our people. They are fighting because we are Jews. If you are not sure which side is which, then I’m afraid I may know your answer. 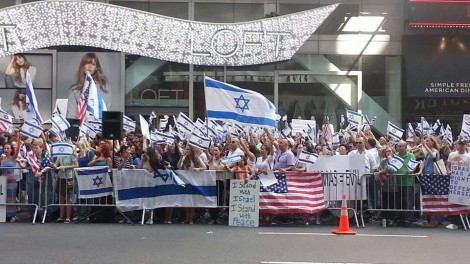 A rally in support of Israel this week in NYC. Photo: courtesy
About the Author
Laura Ben-David is a photographer, public speaker and Israel advocate. Inspired by her Aliyah experience, Laura began writing and never stopped. She is the author of the book, MOVING UP: An Aliyah Journal, a memoir of her move to Israel. She has spoken all over the world about Israel, Aliyah and other topics, often with beautiful photographic presentations. Formerly the head of social media at Nefesh B'Nefesh, Laura is the director of marketing at Shavei Israel as well as a marketing consultant.
Related Topics
Related Posts
Comments