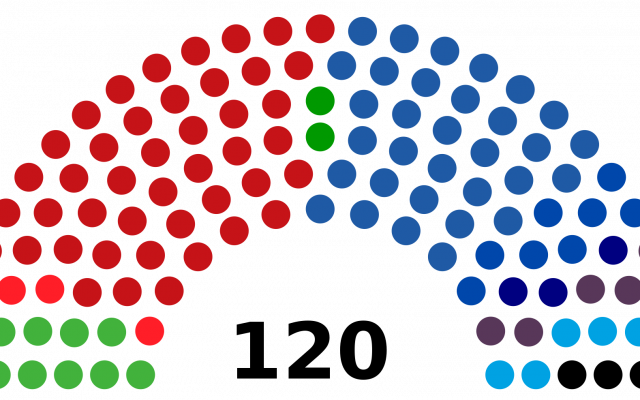 Israel’s Knesset was first convened in 1949. It replaced the various provisional councils that had run the country after it gained independence on 14 May 1948.

We are told by the Knesset’s website that Israel has no written constitution. Over the years, there have been various attempts to draft a formal document, but all have failed. In place of a constitution, Israel has evolved a system of basic laws and rights, which enjoy semi-constitutional status. This provisional solution is increasingly inadequate for modern Israel’s needs, and the necessity for completing this historic task has never been so urgent.

The Knesset’s website goes on to list the duties of a Knesset Member. At the top of the list, we find:
“A Knesset Member will uphold the dignity of the Knesset and its Members ….”

Anyone who has witnessed the extraordinary scenes from the Knesset in the last few days, with half a dozen members all shouting at once and no attempt at a civilised debate, will realise that dignity is nowhere in sight.

It is clear that we cannot expect dignified behaviour and polite debate from the self-interested politicians who make up the current Knesset. We are close to the day when we will see verbal assaults degenerate into physical violence as the warring members put their personal and party interests way in front of the country and its forgotten citizens. Do we really want to join countries like Georgia (2014), Nepal (2015), Turkey (2016), or Taiwan (2020) who have experienced wild brawls among their lawmakers?

The behaviour of Knesset members reinforces the public’s view that politicians are clueless, selfish, incompetent and corrupt. They would rather take payment in exchange for their “services” than work for the good of the public.

The Knesset was named after the Knesset HaGedolah which started around 516 BCE, the early Second Temple period, and lasted until 332 BCE, the early Hellenistic period, when Alexander turned up.

The Knesset HaGedolah was an assembly of 120 scribes, sages, and prophets. We look in vain for scribes, sages, or prophets in today’s Knesset. We see only scribblers, fools and those looking for profits.

I would like to suggest the first formal statement for Israel’s long-awaited constitution.
“Membership of Israel’s governing body, the Knesset, shall be barred to politicians.”

Yes, members of our new Knesset will be drawn from the ranks of Israel’s scientists, physicians, agriculturists, authors, who have all gained international reputations. I was going to give the reader a list of their accomplishments, but they are too many and too diverse to fit in this simple blog.

Perhaps, to fulfill Abraham Lincoln’s dream of a government of the people, by the people, for the people, the Knesset should include at least one blog writer.