A review of “The Storied Life of A.J. Fikry” by Gabrielle Zevin

The Story: A.J. Fikry happily abandoned his PhD in American Literature to open the first bookstore on Alice Island, the place his wife Nic grew up and always wanted to return to. But since the car accident that killed both her and their unborn baby, this New England summer tourist trap has become a year-round prison of memories. He’s now determined to bankrupt his business and then sell his only rare, first-edition book so he can retire and drink himself to death. It doesn’t help that his favorite book rep from Knightly Publishers has died and his replacement, Amelia Lohman is pushing their winter list. Then Fikry’s rare book is stolen on the same day he finds Maya, a 25 month old baby girl, abandoned by her mother in his shop. After Maya’s mother’s body washes ashore Fikry slowly learns to understand the sign that adorns the Island Books’ shop: “No Man is an Island; Every Book is a World.” 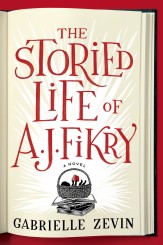 I should have been turned off to this book by the blurb that told me it was “In the spirit of The Guernsey Literary and Potato Peel Pie Society and The Unlikely Pilgrimage of Harold Fry.” Not because I didn’t love those books, but because, much like our titular character, I hate it when publishers do something as gimmicky as take two beloved books and try to convince me that I’ll love this one by comparison. However, I couldn’t resist a novel about a book store in what sounded like a very charming, if isolated place. You see, I believe that anyone who adores books as much as I do, but then tells you that they haven’t dreamed about making their living totally surrounded by them, is a bald-faced liar. So of course I was drawn to this book, and I cannot thank the publishers enough for letting me read it.

There are several reasons why this book has already become a favorite of mine. To begin with, I truly appreciated the originality of how Zevin prefaced each chapter with a short blurb, critique or comment by Fikry about a short story he has read (often well known ones). Each of these are followed by a chapter in Fikry’s life that, in one way or another, relates to the same story. In fact, the first part of the book felt almost like a collection of well-related short stories. But even a collection of the best well-related short stories do not make a novel. However, Zevin overcame this by slowly transforming this unique-feeling format into a fully, solid and cohesive work. I can’t say exactly when this happened; it just does. When you realize this, you’ll also understand why you’ve stop wanting to put the book down.

Of course, any novel is only as good as its characters, and Zevin gives us just the right sized slew of them that go from charming to appalling us. Of course, our main protagonist is the titular book store owner. Despite his curmudgeonly attitude at the onset of the book, we watch him morph into someone we care deeply about as the story progresses. The empathy for A.J. is, of course, essential to the overall story, as is his relationship with his adopted daughter Maya. Zevin also gives us A.J.’s sister-in-law Ismay (Nic’s sister), who is married to the philandering (one-hit) author Daniel Parish. Then there is Lambiase, Alice Island’s Chief of Police, who A.J. ends up going to with each of his emergencies, leading to an awkward friendship. Finally, as any good playwright knows, you can’t show a gun in the first act and not have it go off by the end of the play; Amelia Loman from the first chapter reappears to take on a major role later in the book. Each and every character is humanly imperfect, and utterly believable.

Speaking of that “gun in the first act,” I was happy to see how Zevin included her other veritable gun from early on in the book into one of the last acts. And I say this as someone who doesn’t always want everything to be tied up neatly at the end of every novel. In this case, despite the slightly more than usual convenience of it, I have to say it worked very well. In fact, if there is anything people might criticize about this novel, it will be this handy coincidence being just a bit too expedient. However, I didn’t find it overtly so, and considering the power this novel’s ending, including the unexpected twists along the way, I can’t say this detracted at all from the overall work.

It should be no surprise that I’m giving this novel a full five stars out of five. It is perfectly written, interestingly constructed, has sympathetic characters (including the ones you won’t like), and makes for an all-round compelling read with its well formed plot. I can’t think of anything else that anyone could ask for, except to tell you to read this book – you won’t regret it.

“The Storied Life of A.J. Fikry” by Gabrielle Zevin released in the UK by Algonquin Books on April 1, 2014, and in the US by Little, Brown Book Group (as “The Collected Works of A.J. Fikry”) on March 13, 2014. This book is available on Kindle from Amazon, Nook from Barnes & Noble, other eReader formats from Kobo, as an iBook or audiobook from iTunes, in paperback from The Book Depository, or from an IndieBound store near you. My thanks to the publishers for a review copy of this book via NetGalley.

(A version of this review originally appeared on {the now defunct} Yahoo! Voices on March 19, 2014.)