I was born into a Christian family in Lebanon in 1961. My first memory of Israel dates back to the early 1970’s. We were at the dinner table, and the adults were talking about some Israel-Arab clashes. All I remember clearly is that one of my uncles (who was only ten years older than me), said defiantly that he had more sympathy for Israel than for the Palestinians.

I have no other memory of my family ever talking about Israel, even during Operation Peace for Galilee that started in 1982 and that brought Israeli soldiers to the streets of Beirut. However I remember that my father mourned the death of Egyptian President Gamal Abdel Nasser in September 1970, three years after Nasser’s humiliating defeat at the hands of Israel. Despite having to flee Egypt where he grew up, my father, like many Egyptian Christians, maintained fondness for Egypt and even the leader who caused them to leave.

During my years in Lebanon, my sympathy for Israel grew out of appreciation for its modernity. In Lebanese conservative society, I felt confined and resentful that places like France (to which I was exposed extensively at school and through the media) offered freedoms that we Lebanese youths could only dream of. When I heard of Golda Meir, her commanding look and her reputation as a tough leader contrasted dramatically with the meek and secondary roles reserved for Lebanese women.

A couple of years into the Lebanese civil war (which started in 1975), I was in class at school. While various students were working in groups, and the teacher was speaking with some of them, I walked to the blackboard and drew a Star of David. I do not remember any reaction from other students, but that incident no doubt confirmed the belief by some of my classmates that I was a strange kid.

In 1978, I enrolled in Engineering School. Near the end of the five-year program, there were several months during which I crossed an Israeli checkpoint on my way to university. Checkpoints were common during the Lebanese civil war, and we all had to carry a government-issued ID card that showed our religion. Checkpoints manned by Muslim militias were scary for Christians because once in while Christian and Muslim militias would retaliate against each other by taking people, based purely on their religion, and shooting them. Israeli checkpoints, manned by young soldiers with their shirts untucked, did not bother me. 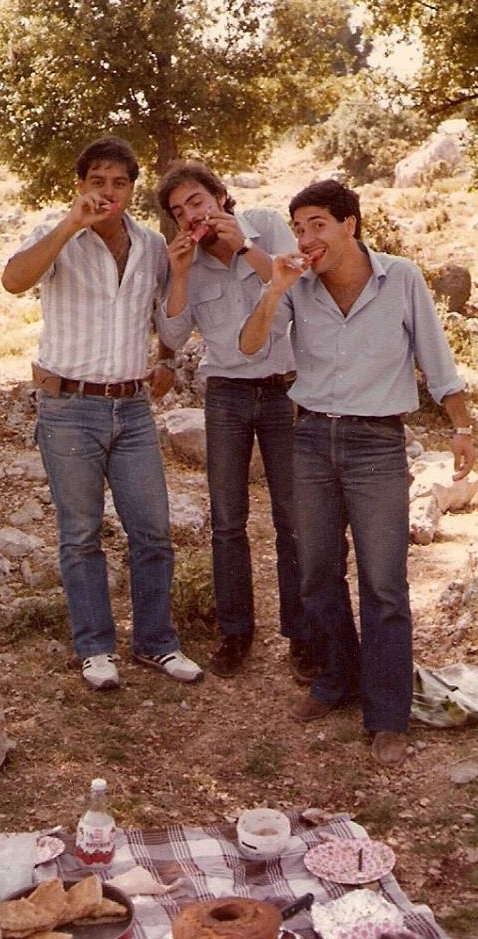 I did not meet any of the very few Lebanese Jews still in Lebanon at that time, but I was exposed to Jews through French literature. I read about French socialist Prime Minister Léon Blum, a Jew who refused to leave France when the Nazis invaded in June 1940, and who was jailed by the French authorities and tried for treason (for opposing the new pro-Nazi government of Marshal Pétain). I also read modern French Jewish thinkers, such as the left-wing author Jean Daniel, founder and editor of the Nouvel Observateur.

By the time I left Lebanon for Canada in November 1984, I had a high opinion of Jews and much respect for Israel, but I still knew little about either. It is only in 2003 that I started learning about Israeli history – Alan Dershowitz’s book “The Case for Israel” caught my intention, and I read it with great interest. Dershowitz’s rational arguments based on facts suited my engineering mind. After reading that book, I was transformed from vaguely sympathetic to Israel to an advocate for the Jewish state.

After “The Case for Israel”, I read many other books on Israel. The four books that marked me the most are “My Life” by Golda Meir, “Shalom, Friend: The Life and Legacy of Yitzhak Rabin” by David Horovitz, “The Prime Ministers: An Intimate Narrative of Israeli Leadership” by Yehuda Avner, and “Menachem Begin: The Battle for Israel’s Soul” by Daniel Gordis.

I came to admire the astonishing mix of courage, dedication, and humanity in Israeli leaders, both from the left and the right. I was struck by Menachem Begin’s unwavering commitment to the rule of law in Israel, despite being repeatedly humiliated and sidelined by Labor politicians and by voters. I was humbled by the strength and the intellect of Meir and Rabin combined with their unrelenting faith in peace with the Arab world.

My conversion to Zionism – the belief that Jews have the right to self-determination on their ancestral land – is unremarkable. I did not work for Shin Bet, I did not flee Lebanon and cross the border into Israel, and I was never surrounded by a virulent antisemitism that I had to overcome. I grew up in a supportive and caring family where having my own thoughts was not discouraged. My Zionism grew naturally out of intellectual curiosity and learning.

An Arab friend told me recently that Israel is the best thing to ever happen to us Arabs. It reminded me that I am not alone among Arabs in seeing the amazing potential that Israel represents to Arabs as a neighbor and a partner. I am however one of the few who speak out publicly.

When it comes to Israel, there is no doubt that I carry my heart on my sleeve, and why should I not? Here is a neighbor that we Arabs could learn so much from, and with whom we could have excellent and mutually beneficial relations if only we so wished. Israelis just want to live in peace. The Arab world has used and abused the Palestinian cause to fight Israel, and in the process, it has battered the Palestinian people and hurt itself.

Arab leaders could quickly find a favorable solution for the Palestinians if they so wished, but they choose instead to continue the hatred. I cannot accept that, and I refuse to be silent about it. I know that one dissenting Arab voice means little, but if a few thousand or even a few hundred Arabs similarly spoke up, Arab leaders would have much more difficulty hiding the truth from their peoples.