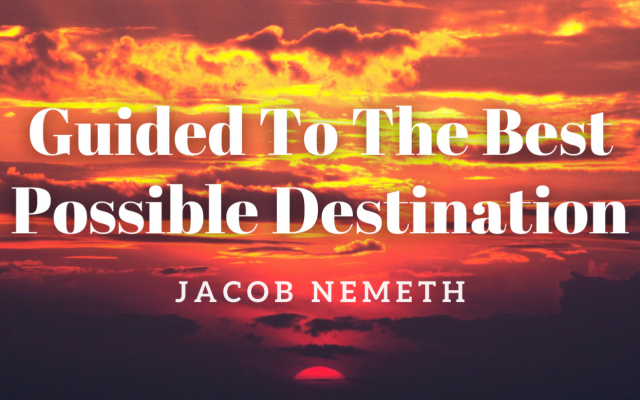 Seeing yeshiva as a once in a lifetime opportunity, I hopped on a flight to Israel the day after my college graduation in order to study at Aish HaTorah where I have been for the past 15 months. Fired up from day one, it did not take long before I gravitated to the Chumash and yesterday, I finished the entire Written Torah!

The lessons contained inside are supernal. Right off the back in Parsha Berisheis we see something extraordinary. Only when G-d creates man does he call his creations “Tov Meod (Very Good).” Rashi defines good as “complete” meaning its existence and function is final.

To function, we need help. The opposite of Tov Meod, Lo Tov (Not good) is only found twice in all the Chumash. First, when G-d sees it is not good for Adam to be alone so he creates Eve, and the second is when Jethro, realizing Moses was running the judicial system alone, suggested that he should appoint judges to share the load. We learn from this that one person, no matter how great, is incapable of fulfilling their ultimate potential unless they have someone, or community helping them along the way.

The greatest help the Jews have ever received is from HaShem who gave mortal, tiny and imperfect people the ability to recreate the entire universe. All he wants in return is to have a relationship with his creations, each of which add their own unique beauty and purpose into the world.

Judaism’s purpose however may be the most unique. Jonathon Sacks, the former Chief Rabbi of the United Kingdom says that Judaism is “A protest against imperialism.” He defines it as “The attempt to impose a single truth in a plural world.” The two most powerful and imperialist empires of biblical times were Mesopotamia and Egypt, both of which G-d tells the Jewish people to leave.

Unlike imperialism, Judaism, being the world’s first monotheistic religion, has a different mission as Rabbi Sacks highlights; “The miracle of monotheism is that unity in heaven, creates diversity down here on earth.” Diversity is the greatest strength mankind has. By conquering our evil urges, like Joseph not being seduced by Potiphar’s wife, we can tap into our unique abilities for good. If we don’t, like the spies who gave a slanderous report, we waste that potential.

Mitzvahs not only help us overcome our evil urges, but also are vessels to connect with HaShem and elevate the world. Abraham exemplified taking every opportunity to perform mitzvahs out of love for all creations. We see this when he left the presence of G-d just to wash the feet of strangers. Chesed is the foundation of Judaism.

If it was not for chesed, I would never have been at yeshiva at all. Random acts of kindness such as a Chabad Rabbi dropping me off me humantashins when I had nothing to celebrate Purim with stands out the most. Another moment I will never forget was when I was once lost in Mea Shearim on Shabbos and stranger after stranger kept offering to take me in for a meal.

It was not just kindness that brought me to Yeshiva but also fear. My senior year of college I was horrified by the amount of my Jewish peers who refused to attend anything Jewish. This refusal, even for non religious activities like matzo ball soup making events drove me crazy.

I understand people may prefer not to go to events that do not interest them which is ok, but I also know some Jews are afraid to express themselves which is heartbreaking and not ok. I learned this on birthright when multiple groups met up and spoke about being Jewish on a college campus. Of the 70 students who were given an opportunity to speak, I was the only person who said anything positive. Everyone else expressed fear, how they felt socially isolated, and there I was talking about how I wore tzitzit and a superman shirt to my fraternities parties proclaiming myself as SuperJew. From this, I realized a major problem; Jews try to hide their identity to fit in, whether it is out of fear or for social acceptance.

Fear of being Jewish can largely be attributed to Anti semitism which is rising throughout the world and people aren’t educated well enough to identify it and neutralize it. According to a recently published study conducted by the Conference On Jewish Material Claims Against Germany, found that nearly ⅔rds of US adults ages 18-39 are unaware 6 million Jews were killed in the Holocaust, 23% said they believed the Holocaust was a myth, had been exaggerated or they weren’t sure, 48% could not name a single concentration camp or ghetto and what I found most scary was 10% thought the Jews caused it entirerly.

Anti semitism is not even our biggest threat. The Jews biggest enemy has consistently been ourselves. Yes, Amalek is a bad dude but we have overcome him numerous times while our constant internal battles are a thorn in our side to this day. Don’t believe me, spend a day in the Knesset. Jews need to coalesce as one nation in order to build a safe, positive community but unfortunately we don’t always act as one and it leads to further division and low morale for Jews worldwide.

Aharon HaKohen is known for his constant drive to pursue peace. We don’t have someone with that ability today, but there are some who contain a spark of him. I met one my last year of college when I invited a Holocaust survivor to speak at an event called We Walk To Remember. She explained to us that every day in the concentration camps she planned her revenge. Revenge was not to kill Nazis but to survive, because even if just one Jew survived, Judaism would live on with them.

People like her showcase what it means to be a Jew better than anyone else. What goes on in a Jews head when their lives are at stake is not about themselves, but for Judaism as a collective. A Jew never gives up just like the barren Rebecca praying to have a child or Nahshon jumping into the Sea of Reeds when the Jews were pinned between the water and the approaching Egyptian fleet.

I believe studying Torah will help restore Jewish pride for those who feel unable to express themselves. They will see for over 3000 years, Jews have faced adversity similar to today and were able to overcome it. No one else has been able to outlive Rome, Egypt, Babylon, Greece and any other massive empire which tried two wipe us out, but as we see time and time again, the Jews are eternal and will never go extinct. Our secret to survival is through our covenant HaShem which only strengthens everytime someone performs a mitzvah or learns even as little as one word or Torah.

The Torah contains so many cool hidden details and life lessons. That is why I compare Chumash to a 1000 piece puzzle. You can internalize all sorts of meanings and outcomes trying to figure out where all the pieces go. Internalizing helped me find themes for each Parsha such as Noach is “one man can save the world;” Toldos is “the cosmic battle between good and evil;” Kedoshim are “ways to treat each other.”

My favorite theme, “Always do your best” comes from Parshas Vayikra and Tzav. These parshas teach us the laws of sacrifices. These offerings vary depending on your capability to give. If you are poor but give to your fullest capability it’s as if you gave more than a rich man who, though may have given a larger offering, failed to give the best that he could. Judaism teaches we are judged on how much we invested in making the world a better place based on our ability to give.

Our ability depends on ourselves. We all have our different strengths which leads us on different paths. Parsha Bamidbar is when the tribes divided into different camps and lived under different flags. Each tribe had its own mission, but what made the tribes different actually made the Jewish Nation stronger.

Our unique paths may be different, but the destination is all the same. In Parshas Bechukotai, Ki Savo and Hazzinu, we learn of all the struggles the Jews will have but ultimately will end up back in the land of Israel living in prosperity for eternity.

While eternity is above our comprehension, Torah’s lessons are eternal and applicable to today. After the sin of the Golden Calf, we were threatened to be destroyed however, one Parsha later (unless its a leap year), the Jews complete the Mishkan which is G-d’s most prized possession. What does this show? That no matter how terrible one sins, they are always given an opportunity to repent and can go from the lowest of lows to the highest of highs within the blink of an eye. When our current exile ends, we will see that G-d was with us the entire way, helping us come back to the highest of highs

In order to keep our tradition, we need Torah and it just so happens that the final mitzvah is to write your own. This does not have to be an entire scroll, but even a single letter. These scrolls are sacred and we get to celebrate them this weekend during Simchat Torah. I am so hyped to dance with the Torah knowing that I have read every word in it and will be restarting again next week. Similar to Jacob who goes to a distant land for many years only to come back with a family and riches beyond comprehension, I hope to bring all the priceless things I learned back to America in order to help my fellow Jews connect to their heritage.

G-d has certainly helped me out a ton to get me where I am now and hopefully will continue moving forward. For some reason he chose the kid who tried to boycott elementary school for not putting up Hanukkah decorations to be the guy quarantined at the Kotel, with a view of the wall from his bedroom window. We may not know where life is taking us but we should know we are being guided to the best possible destination.

Little baby Moses was floating to his death in the Nile only to end up in the same house he would eventually free the Jews from. No mighty Empire will ever prevail in compromising our fight against imperialism. Jews stand against immorality and strive to bring monotheism into the world to spread diversity, morality and take charge in Tikkun Olam. I want to bless everyone with much success to make your peers happy, smile and laugh. May we all be able to fulfill a plethora of mitzvahs in our lifetimes and may we one day be granted the privilege to live in the Messianic Age.