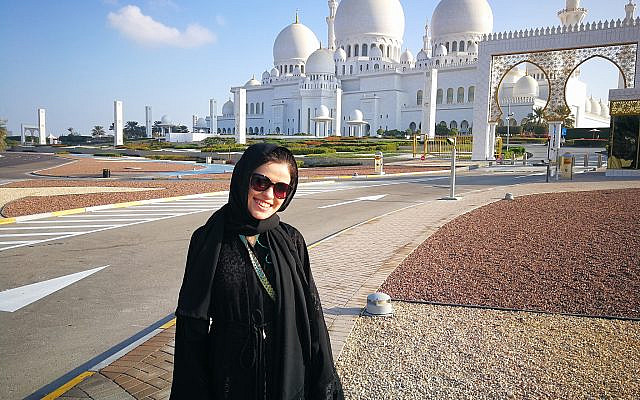 Since the news about the peace agreement between Israel and UAE broke out, many friends have asked me whether I think it is safe for Israelis to travel to the Arab Gulf. Most of them are unemployed and hungry due to COVID19 but they are already checking the prices for hotels in Dubai and Abu Dhabi.

That’s ok guys, it’s possible to travel on a low budget there as well!

Thanks to my European passport, I’ve been to three Arab Gulf countries, three times over the last three years and I can’t wait for the fourth trip. By the way, never call it the Persian Gulf in front of Arabs! If Bibi was to mention the Arab Gulf in his speeches, he might instantly get more Arab countries to sign the agreement.

Last year I attended the Arabian Travel Market exhibition in Dubai with no expectations higher than grabbing a few free pens and USB sticks but also to futuristically promote our alien peace trips to the Holy Land,  just in case of any peace agreement! My Palestinian partner and I mostly got warm welcomes and those whom we networked with, expressed their high hopes that soon we can start planning to visit each other.

At the exhibition, I remember the mixed feelings of people upon seeing my badge with Israel on it. There were awkward looks and a few hostile frowns but the curiosity to meet an Israeli was definitely dominant. For instance, one Iranian guy even told me how much he loved Bibi. Pulling my eyebrows high in disapproval, he replied: “Well, you know the saying: “The enemy of my enemy is my friend.” But according to this logic, I am supposed to like Rouhani so we both agreed that old sayings can get old.

The second time I went, I was with my bestie to attend a wedding of our Omani friend in Muscat, for whom we got a Judaica gift from Geula. The shopkeeper is still asking me until today how the wedding in Uman was, despite me correcting him multiple times that it was Oman. It was also September before Rosh Hashana and I flew from Amman, so it became extra confusing to explain where I was going.

Upon arriving by lowcost to Dubai, we took a five-hour bus for only 10 Euros to Muscat. Like I told you, I can give some very good tips for how to travel the Gulf on a low budget. In the last few days, we kept eating at our favorite and cheapest Pakistani restaurant in Dubai since we spent our last money on perfumes, dresses, and incense from the local markets.

My Gulf memoirs are endless but I want to share with you more from my first visit there three years ago.

Surely, not having that many connections and friends the first time and not knowing what to expect felt adventurous. The only contacts I had were from my Palestinian friends, whose friends and relatives welcomed me. Hamza showed me Dubai, Musa – Abu Dhabi, Heba – the beautiful Muscat, Ahmed – Bahrain.

This is when I noticed how big the community of Palestinians in the Gulf countries is. It reminded me of another diaspora, the Jewish one, in Europe and the States, where everyone knows each other, helps each other, and sticks together. They took me to a debka training session and a Friday brunch of Palestinian students, which reminded me a lot of our Hilel Shabbat meals.

“I miss Palestine every day but all I want is to live in dignity. I could never have it there,” said the father of my friend in better Hebrew than mine. He left Jenin in the ‘80s looking for a brighter future for his children. His daughter Abir, who is my friend, met a guy from East Jerusalem on ICQ, married him, and moved to live there. When I came back from my trip, she told me, ‘’Now you understand why I complain so much about my life in Sur Baher.’’

Indeed, the living standard of Palestinians in the Gulf is much higher than back home, but as my friend’s father said what matters the most is the fact they are respected and valued.

Many still work in construction, but instead of shiputzim, they are engineers and managers in top positions. Another Deja Vu I had while touring Dubai with Hamza. He kept pointing out at skyscrapers here and there. “This one is also built by Palestinians, and that one is even owned by a famous wealthy Palestinian.” It reminded me of every time my grandfather would stumble upon a known figure and stress on his Jewish origin.

When visiting the beautiful mosque in Muscat with Heba, the imam asked us where we were from. Heba immediately said Israel as if she wanted to show off that she brought him a Jew from AlQuds.  “Yahud?!” The imam screamed in amazement so loud that all the rest of the visitors of the mosque turned around. “Does she want me dead?” it crossed my mind. But instead, everyone came to say “Hi” and were excited to meet their first Jew and even take a selfie. I felt like a superstar! 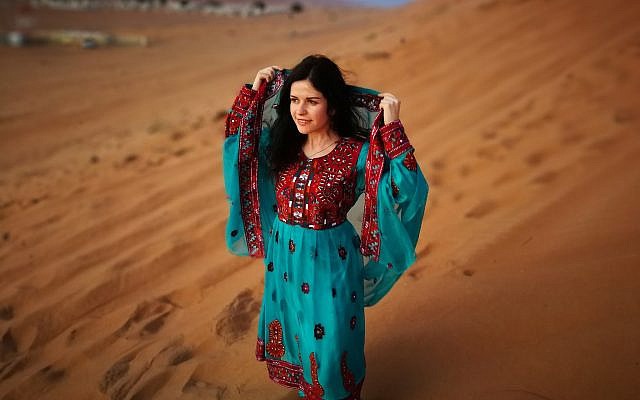 The Author posing with her new dress in the Omani desert

To sum up my Gulf experience: not dangerous after all; excellent food from all over the world; head spinning shopping at colorful markets; oases, endless deserts, wadis and mountains (only in Oman though); mind-blowing skyscrapers; friendly, welcoming people; possible to even travel on a budget.

It’s important to note that many Palestinians and their allies in the international community are frustrated over the fact that the peace agreement between UAE and Israel is being signed before we’re able to achieve peace at home, as we haven’t yet dealt with the occupation – some Palestinians feel betrayed.  I am all for the normalization that gives people the opportunity to see beyond what they know. Perhaps now when Arabs of the Gulf come to visit the Holy Land, it would hopefully push Israel to positively change its attitude towards Palestinians and encourage new kind of peace negotiations which we haven’t had yet.