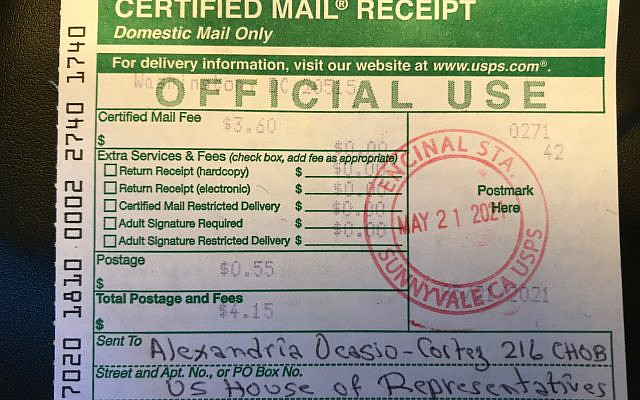 My 98 individually addressed certified letters to members of the Congress are being delivered by the US Postal Office as we speak. The recipients encompass a diverse set of East and West coast states, both Democrats and Republicans: they include all the Representatives from the states of California (53), New York (27) and Pennsylvania (18). We find here the notorious Democratic representative Alexandria Ocasio-Cortes, from the 14th district of New York, and Nancy Pelosi, the Speaker of the House, from the 12th district of California (my neighbor San Francisco). On the Republican side, it includes the new Chair of the House Republican Conference, Elise Stefanik, from the 21st district of New York, and the minority Republican leader Kevin McCarthy, from the 23rd district of California.

And here is the letter to the members of Congress (if you happen to be one of them … and your executive assistant did not forward it to you, here you get another chance to read it):

Your vote is very important to me. I enclose below information about Gaza and Hamas that may help you.

What is Hamas – The Hamas war doctrine and objectives

In an inversion of science fiction novels where the elite class enjoys life outside on the ground while keeping the lower class working underground in inhuman conditions, Hamas’ war doctrine consists of keeping the dispensable items outside in the open, while the military assets and the elite political and military cadres live and operate underground.

Dispensable items include civilians and civilian buildings and infrastructure: this is what the press and social media see and report, both during normal days and especially during armed conflicts, when emotions run high. These are dispensable items: they are continuously replenished and rebuilt in between armed conflicts, by natural population growth and the influx of money from Muslim states and well-meaning naïve Western European organizations. As in the science fiction novels, health and material conditions of this low-class dispensable population are kept to the minimum necessary to insure the continuation of this regime and the achievement of its objectives. Ideological indoctrination is strictly imposed at the schools from a young age.

Hamas’ ideology is simple and it is this simplicity that makes it so powerful to the masses: “Israel will exist and will continue to exist until Islam will obliterate it, just as it obliterated others before it”. This declared objective appears right at the beginning of Hamas’ Covenant, as translated and published by the Yale University School of Law [1]

To dispel any doubts between being only “anti-Israel” or just plain “antisemitic”, Hamas’ Covenant spells this explicitly: “The Prophet, Allah bless him and grant him salvation, has said: ‘The Day of Judgement will not come about until Muslims fight the Jews (killing the Jews), when the Jew will hide behind stones and trees. The stones and trees will say O Muslims, O Abdulla, there is a Jew behind me, come and kill him.”

Plain and simple. As were the means used to demonize the Jews by Nazi Germany and as is the demonization of Israel by the fanatic religious regime of the Ayatollahs since they took power in Iran in 1979.

These three regimes, Nazi Germany, Iran’s Ayatollahs and Hamas share the same ideological structure: after clearly stating their objective (despicable as it may be) they then proceed methodically towards achieving this objective. Their reasoning does not differ in one iota from the logic used, for example, by Euclid in his Geometry: state clearly a few basic axioms and then systematically proceed to derive all their consequences. One just has to accept the premises, then anything else is logic and justifiable.

The Western media willfully ignores Hamas’ ideological axioms and then hand-picks selected “facts”, for example, Israel’s “disproportionate” use of force and the “unbalanced” number of casualties on both sides. Hamas launched its first rockets towards Jerusalem and other Israeli cities on May 10, 2021. Since then, it fired during ten days more than 3,500 rockets towards Israeli cities. In response, the Israeli air force launched hundreds of sorties. No one in the media and the press seems to notice the incongruence that after thousands of precise and powerful guided-bombs used by the Israeli air force only about 200 Gazans were killed. Were these pilots all drunk and merit an “F” for abject failure, or is something else going on? What are these pilots targeting then?

By comparison, German civilians – men, women and children – killed by the Allied strategic bombing on Germany soil during World War II ranged between 350,000 to 500,000. Hitler committed suicide in his underground bunker on April 30, 1945, to avoid being captured alive by the advancing American and Russian forces. Only then, Nazi Germany surrendered days later on May 7, 1945.

Hamas and the Gaza strip

In 2005 Israel dismantled all the Jewish settlements and forcefully evacuated every Jewish settler from Gaza, leaving the territory to the Palestinian Authority (PA). For many in Israel this was a painful experience, but for a brief period of time Israel and the international community were filled with hope that the Gaza strip would flourish and this will later enable a peaceful resolution of the conflict in the West Bank. In 2007 Hamas ousted the PA from Gaza by force. Since then, this hope was replaced by despair and periodic armed conflicts between Hamas and Israel. The longer Hamas holds its grip on Gaza the more difficult and further away a 2-state solution will be.

[1] “Hamas Covenant 1988 – The covenant of the Islamic Resistance Movement”, published by the Yale School of Law:

Note: I also sent similar letters (through individual personal emails) to about 400 reporters from my state of California, from the two main newspapers in Northern California, the San Jose Mercury News and the San Francisco Chronicle and from the main newspaper in Southern California, Los Angeles Times. In their replies, some of these reporters were sympathetic to my views. I did not get any negative reply.  I also submitted unsolicited op-eds to the San Jose Mercury News, the San Francisco Chronicle, the Los Angeles Times, the Washington Post, the New York Times, the Wall Street Journal, the Chicago Tribune, the Boston Globe and USA Today. As I expected, my op-eds were not accepted for publication, but I only wanted to get the attention of these editors to a view that is usually not published in the US press: perhaps, I could influence somewhat their future own editorial opinions.