Once Israel accepted the ceasefire conditions on Wednesday, I began checking the news and Facebook obsessively to see how long we would refrain from responding to the rockets that were assuredly going to continue to fall. As the day wore on, I began to see messages from some of my friends saying that they had gotten SMS’s from Hamas. I ran to check if I was one of the popular kids, and when I saw my very own pro-Hamas text, the first thing I did was show my co-worker.

I gave him an exasperated look. “How should I know?! It’s in Hebrew!”

He reached over and grabbed my phone. He told me approvingly that the Hebrew in the message was much better than when Hamas had taken over the Dominos Pizza website, and then he scolded me that Hamas could now speak better Hebrew than I did. 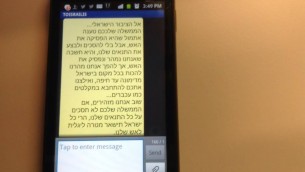 “Basically, it says that the ceasefire Israel agreed to was done without Hamas’s consent. They sent us to run like rats into the shelters. And if our government doesn’t agree to their demands, all of Israel is a legitimate target.”

I asked around at the office if anyone else had received a HamaSMS, and no one had. I was surprised, because when I checked on Facebook, several of my friends had reported getting one. What made me so special? And then I began to see the pattern. All of the people who had gotten messages lived near my old yishuv, in territory that was over the border of the green line.

From a marketing standpoint, if Hamas were truly interested in peace, I couldn’t believe it! It seemed strange to target ads exactly to those people most likely to respond to this kind of psychological warfare aggressively. Some of my friends began to post angry missives declaring that they would never be pushed to negotiate with the enemy, and I expected any minute to hear of a new West Bank settlement called Text, built in honor of the fight against encroaching cellphone terrorism.

Even I felt more amused than anything. It was almost a badge of honor to be singled out, even though I no longer lived in the area. As soon as I told him about my message, my husband checked his phone, and was delighted to find he’d gotten one also. He had been a little sad when we left our home in the West Bank, so this was just the kind of thing to remind him that he was still, in some small way, an obstacle for peace. Thanks, Hamas! Midlife former settler crisis averted.

Later in the afternoon, one of my friends disclosed that the head of security for my old village suggested not opening the message, since Hamas might be using it as a way to see where we were all located. Oops. I should have known that. But I was just so excited to finally get a text message that wasn’t a store sale notification or a come on from a loan shark, that I had acted without thinking it through. I replied that since we now lived near Tel Aviv, my husband and I probably would be single-handedly responsible for throwing off the accuracy of any attacks. You’re welcome.

Getting the text message reminded me how sorry I feel for the people of Gaza. I have a government that, while certainly nowhere near perfect, has done everything it can to try to protect me in the face of an ongoing threat. I feel safe enough that I can look at a message from the enemy as a joke. Every day, Gazans are getting a different kind of text message from the IDF; one that explicitly states that this conflict is not a joke, and that, despite Israel’s wish for peace, civilian lives are in danger due expressly to the actions of their government. Hamas, we have your number.