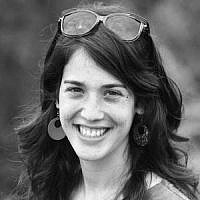 The Blogs
Ilana Sherrington
Apply for a Blog
Advertisement
Please note that the posts on The Blogs are contributed by third parties. The opinions, facts and any media content in them are presented solely by the authors, and neither The Times of Israel nor its partners assume any responsibility for them. Please contact us in case of abuse. In case of abuse,
Report this post.

Hamas has tried to hurt Israel for a very long time. From almost as soon as I can remember myself, there have been terror attacks. There have been years of unrelenting violence, intifadas and murder of Israeli civilians. There has been a decade of rockets being shot, targeting all of Israel. Yet for all this time that we have been physically harmed, our morale and spirit have never been hurt.

We have continued as a thriving nation, leading in fields from technology to water conservation to cherry tomatoes. We even bicker amongst ourselves, sometimes forgetting this is a positive sign of a healthy democratic system. We continue our lives much the same as any other normative country. We carry on, hoping for better days.

All this is largely due to the fact that Israel spends millions in developing security systems for its people. Israelis care deeply about life, which is a value that is instilled within us in so many aspects: it is rooted in the Jewish religion, it is based in the democratic system in the country and it is emulated in the liberal values we project. We are also a forward-looking people, not getting stuck in the past narrative, in how much we are wronged, in an everlasting cry for empathy.

But it just got personal…

It’s 4am and I still can’t fall asleep. I’m thinking about my loved ones who have just gone into Gaza with the IDF and I just can’t relax. And I know that hundreds of other mothers, daughters, wives and girlfriends are feeling the same. We’re all watching the news, hearts pounding, and mainly just waiting for a short phone call with the words: “I’m safe”. Nothing gets to you like when the ones you care about have to leave the place where all efforts are made to protect them – to go into an area where all efforts are made to kill them.

For the past 10 days since the commencement of operation Protective Edge against Hamas’ terror I’ve had a sinking feeling in my stomach. Israel wants peace, has continuously offered peace for decades. Israel has been the one who has reached out for a ceasefire in this recent conflict. Israel has done everything in its power to avoid the use of force and has done its utmost to protect innocent lives: aborting missions with a chance of hurting civilians, warning innocents ahead of all attacks. But we have been met with refusal and agreement breaking, time and time again. And each blow has led to the acute awareness that we are not going to have a choice but to use force in order to protect ourselves.

That is because we are currently living under a constant daily barrage of hundreds of rockets. That is because we are faced with terror attacks – whether carried out or attempted – targeted at civilians and designed to end lives. That is because we are not facing a formal army. We are forced into an a-symmetrical war with a terror guerilla organization, one that does not represent its people. One that hurts its own people: by using them as human shields, by stealing funds meant for their welfare into their own pockets, by targeting terror attacks at humanitarian aid meant for their civilians. One that has made it clear that its objective is not to aim at military targets, but intentionally at Israeli civilians.

My father encourages me by saying we can’t let Hamas win, that they want us to be upset, crippled, to disrupt our lives. But how can I keep up my everyday life when I know that my loved ones, that my friends’ loved ones, that my co-workers’ loved ones, are in such acute danger? That they’ve gone deep into no-man’s-land to protect us? That they’re facing fire head on in a monsters labyrinth, ruled by immoral and ruthless terrorists?

That’s because I know that Hamas stows its weaponry in schools and hospitals and UN organizations’ headquarters in the area, hides behind women and children, and has no inhibition doing so. And I know that Israeli soldiers will be hindered by this, as they are taught to be moral from the very moment they first wear a uniform and before a gun is ever put in their hands.

For years I have put myself out on the Israel advocacy limb. I feel I can say I have put my best efforts into fighting the misconceptions about Israel, painting my country’s true colors and combatting de-legitimization. It’s quite easy to be strong when you have the truth on your side and a higher purpose above your head. But the one thing that can break you is when someone you know intimately is put in harm’s way. Serving in reserve duty yourself, knowing that every soldier you have just taken care of is now going into war, is almost too much to take.

May no innocent lives be harmed, on both sides. May the oppressed Gazan civilians be freed from the Hamas oppressors, who have been the cause of their deaths more than they have been ours. Praying together with the Israeli civilians and any other person in the world who has people they care about, for the safe return of the soldiers.

About the Author
Ilana Sherrington was born in Israel, to parents making Aliyah from England. Currently a student in the Hebrew University of Jerusalem, studying International-Relations and Media, she has led many initiatives in Public Diplomacy and Advocacy. Serving as a First-Lieutenant (Ktzinat Tash), in charge of the financial, social and medical welfare of soldiers and an instructor in the officers’ course, she still volunteers for IDF Lone Soldiers. She headed the English-speaking team in her University's Situation room during operation Pillar of Cloud (battling Israel de-legitimization) and heads the #BringBackOurBoys Jerusalem Center, is a Model UN Vice-President and studies in the Jewish Statesmanship Center. She has led many Jewish Agency educational programs. She graduated the Israel StandWithUs fellowship, and participates in the MENA Leaders for Change program, joining Israelis and Palestinians in studying negotiation skills.
Comments