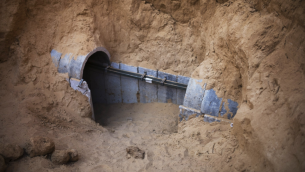 The entrance to a tunnel exposed by the Israeli military is seen on the Israeli side of the Israel-Gaza border. (photo credit: Amir Cohen/Reuters)

It is clear that instead of building schools, health systems and universities with the millions of dollars in international aid given to Gaza, Hamas has chosen to utilize this funding to devise ways to attack Israel.

And many people in Gaza are not happy about this.

Recent polls, cited in an article by the Washington Institute, show that many in Gaza are unhappy with Hamas’s governance. The polls found that 78% of those questioned said that the “presence of Palestinian militias that are not organized under the formal security structure” is at least a “moderate” problem.

Instead of supporting education and creating new infrastructure to give their citizens a chance at a better life, Hamas has chosen to use the money to bring more chaos, more unrest.

I believe that if Hamas had women within their leadership, women involved in making decisions for the people of Gaza, things may have turned out very differently.

Hamas chose to do the opposite.

When I was a soldier over 30 years ago in the Education Corps, I would take soldiers to see the communities in Gaza. We lived together, Arabs and Israelis, in beautiful, productive communities that had been there for centuries. I would show them the beautiful synagogues, the ancient Gaza Synagogue, with its mosaics dating back to the Byzantine period.

Now we find in Gaza a standard of living that is, in all honesty, a humanitarian crisis. At the end of the day, this reality affects women and their families the most.

Women are prisoners within their own homes. Prisoners to a terrorist organization that does not have their best interests in mind. Prisoners to a government that favors funding militant terrorism rather than investing in families.

Hamas has oriented Gaza towards war, not towards building a better future for their wives, children and families.

As a mother, my heart goes out to the women of Gaza, their children, their families. I hope for peace, a real, everlasting peace, for the sake of your family, and mine.