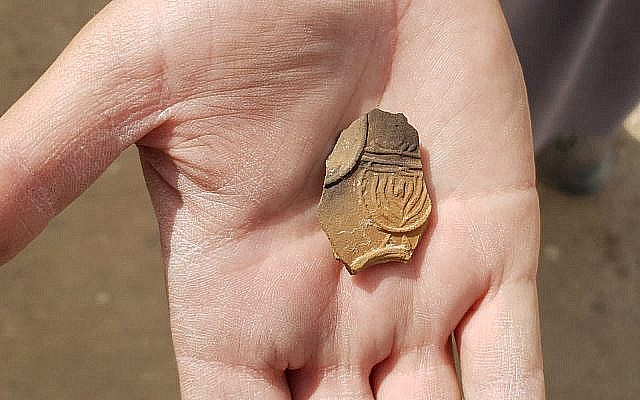 How did the Menorah come to be the symbol of the Jewish people? Centuries before anyone knew of the Star of David; the Menorah was a powerful symbol of Jewish life, both to Jews and non-Jews. From the Arch of Titus, ancient coins, and stone inscriptions to the official symbol of the modern-day state of Israel, the Menorah dominates Jewish history. Why? Of all items in the Mishkan and later the Beit Hamikdash, how did this one become the main symbol?

To mention a few specific examples: in 2009, an Israeli company dug foundations for the construction of a hotel at the Migdal beach on the northern edge of the Kinneret in Israel, they accidentally discovered an ancient synagogue from the time of the second Temple with a beautiful inscription of the Menorah. Ancient coins from 140 BCE produced by the Hasmonaean dynasty also prominently feature a menorah. A 2017 hike in lower Judea also found a menorah inscription on the wall, dating back 1800 years. Other menorahs were found in the archeological dig of the synagogue in Eshtamoa, Akko, Jericho, the ancient burial grounds in Beit Shearim, and many more. 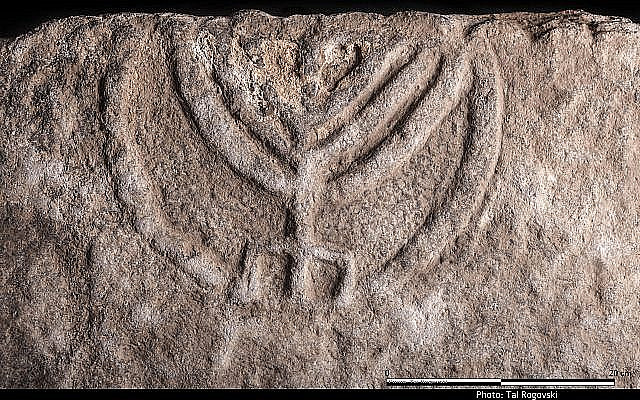 Menorah carved into the door of a Jewish tomb, circa 150-350 CE found in Tiberius. (Tal Rogoveski)

These are just examples of the Menorah dominating Jewish symbolism.

An unlikely testimony to the magnitude of the meaning of the Menorah in Judaism can be found in the account of a Jewish civil war that took place long before the Chanukah story. After the death of King Solomon and Israel’s split into two kingdoms—Judah and Israel, Rechava’am the king of Israel, approaches Judah with 800,000 soldiers ready to attack. Aviya, the king of Judah with only 400,000 soldiers, implores Rechav’am not to attack. Among the arguments against the assault on Judah is a spiritual one:

“But, as for us-the Lord is our God, and we have not forsaken Him, and the priests who minister to the Lord are the sons of Aaron, and the Levites engage in the work. And they burn to the Lord burnt offerings every morning and every evening, and incense and [set up] the showbread on the pure table, and the golden candelabrum and its lamps to kindle every evening, for we keep the watch of the Lord our God, but you have forsaken Him.” (Divrei Hayamim II, chapter 13)

Of all the Temple vessels, the Menorah is the only one mentioned as a compelling argument for the spiritual superiority of Judah over Israel. The power of the Menorah’s body and symbolism date far before the holiday of Chanukah.

When it comes to Chanukah, while a menorah is not mandated by the letter of the law, it too, dominates the spirit of the law. The Talmud (tractate Shabbat 21b) sets out precise requirements of the number of Chanukah candles, who should light them, where they should be lit, and so on. Yet nowhere in the lengthy discussions is there a requirement of a Menorah. Quite to the contrary, there is a Torah prohibition on replicating any of the Beit Hamikdash vessels (Shemot 20: 20). The only way one can produce an item similar to those used in the Temple is by making sure there is a visible change, assuring it is not a replica.

Despite the Chanukah candles not being an attempt to replicate the Menorah body of the Beit Hamikdash, there is no question that the flames are meant to replicate those of the Menorah in the Beit Hamikdash. Moses Nachmanides (Bamidbar 8) suggests a strong connection between the Torah reading of Parshat Be’halotcha, Aaron the high priest kindling the Menorah, and Aaron’s descendants— the Hasmoneans, rekindling the Menorah in the Beit Hamikdash after defeating the Greeks. Nachmanides suggests that those candles Aaron lit in the desert live on through the Chanukah menorah. Despite the various forms of Chanukiyot and Chanukkah candles not being shaped like the Menorah until the past odd three hundred years or so, they were always understood to reflect the light of the Menorah. In this view, the Menorah was intended from the very beginning to take on a life of her own and to live on for posterity in every Jewish home.

Furthermore, Rabbi Nissim of Girona, Spain (1315-1375) in his famous work on the Talmud Chiddushei HaRan (tractate Shabbat 21a) explains that the rabbinic prohibition on using the light of the Chanukah candles for our own personal use as an echo of the scriptural prohibition against benefiting from items in the Beit Hamikdash. Just as one may not use the light of the Menorah in the Beit Hamikdash for their personal use, so too, one may not benefit from the Menorah in their own home. Once again, the Chanukah candles, even when not placed on a candelabra similar to the Menorah, are an extension of the Menorah Moses built in the desert. This perspective highlights the position.

So, what was it about the Menorah that made it such a powerful symbol to carry us through the generations?

Rabbi Judah Lowe, the great mystic known as the Maharal of Prague (1512-1609), sheds a beautiful light on the matter based on a verse in Proverbs—the book of Mishlei (chapter 6). The verse says: “For a commandment is a candle, and the Torah is light, and disciplining rebukes are the way of life”. The Maharal explains the difference between the commandments being a candle and the Torah being a light. Every single Mitzvah is a candle, yet it would never be possible to isolate a mitzvah and view it as a separate unit. The light of the Torah is a united light, made up of many candles.

In 1782, when the founders of the United States were looking for a proper symbol for the United States, congress voted on including a Latin term on the symbol: “E Pluribus Unum, out of many, one.” They recognized that for a nation to achieve anything, it would have to be united. That is why the Menorah ignited the faith and passion of Jews for thousands of years. The Menorah was our E Pluribus Unum— out of many, one. While it is true that every candle represents the light of Torah, each candle is negligible if not connected to the others. The power of the Menorah is the power of unity for good, a unity that recognizes individuals yet brings us together in an unbreakable bond. Let us embrace this power, come together, and realize how much we need one another, it is the power of the Menorah and the secret to both the survival and flourishing of Jewish people. Happy Chanukkah!

Special thanks to my erudite student whose excellent question has brought about this post. Yishar Koach!