Jerusalem, November 30 – The Festival of Lights begins two weeks from this Tuesday evening, but bakeries and confectioneries started showcasing doughnuts weeks ago – and in so doing sparked a renewed clash of cultures among American expatriates who cling to one side or the other of the ongoing Dunkin Donuts vs. Krispy Kreme culinary divide.

The emotions stoked by the sight of doughnuts flare up despite the vast geographic distance from the nearest franchise. Dunkin Donuts had a short-lived branch in Jerusalem more than a decade ago, and many, if not most, of those engaged in the deep-fried imbroglio never sampled its wares. The disagreement takes place entirely on the basis of doughnuts consumed far away, and in many cases long ago, in those days at this time. 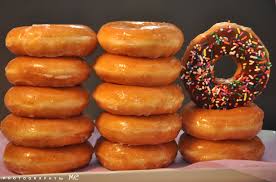 While European and North American Jews emphasize the potato pancakes called latkes, in Israel the celebration of the miracle of the oil on Hanukkah more often takes the form of deep-fried dough, most commonly in the form of a filled doughnut. The confections vary widely in quality, but no quality is necessary to get a Krispy Kreme aficionado embroiled in a vociferous exchange with a Dunkin Donuts fan. The heated encounters, appropriately, call to mind the civil conflict that the holiday recalls, a generations-long spiritual struggle that persists to this day.

Indeed, it is often precisely the cruddy variety of sufganiyah that resurrects the dead horse, says Netanya resident Riba T. Halav, an unabashed Dunkin Donuts fan. “All it takes is the sight of that pathetic filling Israelis call ‘jam’  – a disgusting imitation of DD’s jelly.”

“You mean of KK’s,” interjects Sue Karr, who overhears Ms. Halav’s exchange with a reporter. As the two combatants crescendoed, the reporter edged away.

Other such gustatory rhetoric grows from exactly the opposite phenomenon. “I can’t stand those hoity-toity bakeries that try to come up with some fancy decorated doughnut,” says Kara Mehl of Tel Aviv, gesturing toward a display at Roladin, where each pasty offering runs up to fifteen shekels. “Give me a plain-old glazed Krispy Kreme any day of the week.”

At press time, the two were scuffling over whether Starbucks or Tim Hortons should even be considered contenders.