The Blogs
Camie Davis
Apply for a Blog
Please note that the posts on The Blogs are contributed by third parties. The opinions, facts and any media content in them are presented solely by the authors, and neither The Times of Israel nor its partners assume any responsibility for them. Please contact us in case of abuse. In case of abuse,
Report this post.

It’s graduation time. As I send gifts to high school graduates I’m tempted to write in their cards, “Happy Graduation! Hope you don’t end up hating Israel!” But that would be weird, huh? So I don’t write it. But I at least think it.

Why? Because sadly youths in America, and especially if they go to college, are inundated with anti-Israel propaganda. And if they haven’t been taught to think for themselves, they could easily accept the narratives and propaganda against Israel, which could lead to hating Israel.

I live in conservative mid-West America. But even in my small town, which tends to support pro-Israel, conservative ideology, one of my daughter’s high school teachers called Israel a “bully.”

Which begs the questions: How did a small, upstart nation that was attacked by multiple Arab nations literally the second it became a nation, that fended off attacks with skill and bravery multiple times throughout it’s young modern-day history, that has multiple terrorist states and organizations calling for its destruction, go from being a victim to a bully?  How did Israel’s war efforts for survival go from being self-defense to being labeled “war crimes.” How did Israel’s mere existence on it’s own land become an occupation? 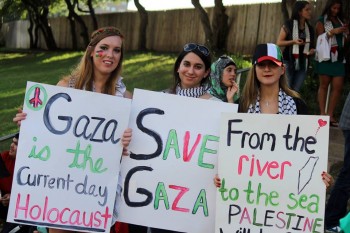 Teens at a Free Gaza rally in Texas 2014

How does an American teenager become brainwashed enough to hold up a sign accusing Israel of committing a Holocaust?  And how do her parents allow her hold such a repugnant sign?

How does a teenager hold up a sign that says, “Save Gaza” and not get smacked in the face with the irony of her sign? If someone told her that Gaza was governed by a terrorist organization that the people of Gaza elected, and that Hamas chooses to use its resources to build elaborate tunnels and to stockpile missiles in order to kill Jews, therefore Gaza really needs to be saved from Hamas, do you think she would even be able to compute such straight forward facts?

How does a teenager hold up a sign with the decades old chant, “From the river to the sea Palestine will be free,” and also not get smacked in the face with the irony of her sign? If someone explained that her sign’s sentiment is exactly why Israel kills Arabs, because for decades Arabs have been chanting this while trying to kill all the Jews, would she understand? Would she understand that the Arabs living in Palestine were offered statehood at the same time that the Jews in Palestine were offered statehood but the Arabs said no? Hence, the chant became a battle cry for Israel’s destruction. Would she understand that her sign is a reminder that the Arabs failed in their quest to kill all the Jews?

These brainwashed teenagers represent thousands of teens and young adults across America who have become literal poster children for a narrative based on lies and the desire to destroy Israel. In essence, they have become the mouthpiece for the Father of Terrorism, Yasser Arafat, who continues to speak from the grave through them.

Yasser Arafat, the instigator of the Free Palestine movement, had a sole desire; to destroy Israel.  Like many Arab leaders, Arafat hated the Jews. And like many Arab leaders, Arafat realized that Israel couldn’t easily be destroyed by conventional warfare. Therefore, he turned to terrorism. And lucky him, the KBG liked funding terrorists.  According to Ion Mihai Pacepa, who was the highest ranking intelligence officer to defect from the former Soviet bloc, the Kremlin charged the KGB to “repair the prestige of our Arab friends” by helping them organize terrorist operations that would humiliate Israel. The main KGB asset in this joint venture was a “devoted Marxist-Leninist,” Arafat.  Arafat became the Soviet Union’s pet project so they sent him to their communist pal Ceausescu in Romania where he could be molded into a legitimate “statesman” to negotiate with the West.

In David Meir-Levi’s History Upside Down: The Roots of Palestinian Fascism and the Myth of Israeli Aggression, he describes how Arafat initially resisted being molded into a statesman who the West would receive. According to Meir-Levi,

Arafat railed against Ceausescu’s injunctions that the PLO should present itself as a people’s revolutionary army striving to right wrongs and free the oppressed: he wanted only to obliterate Israel. Gradually, though, Ceausescu’s lessons in Machiavellian statecraft sank in. Arafat developed propaganda tactics that would allow him to create the image of a homeless people oppressed by a colonial power.”

While Arafat was being molded into a statesman, one of his top men in the PLO, Abu Jihad, was sent to North Vietnam to study the strategy and tactics of Ho Chi Minh.  Again, according to Meir-Levi, “Arafat was particularly struck by Ho Chi Minh’s success in mobilizing left-wing sympathizers in Europe and the United States, where activists on American campuses, enthusiastically following the line of North Vietnamese operatives, had succeeded in reframing the Vietnam war from a Communist assault on the south to a struggle for national liberation.”

While in North Vietnam, it was made clear to Abu Jihad by Ho’s chief strategist, General Giap, that if Arafat wanted to gain support from the West, he had to redefine the terms of his struggle. General Giap instructed Abu Jihad and Arafat to, “Stop talking about annihilating Israel and instead turn your terror war into a struggle for human rights. Then you will have the American people eating out of your hand.’”

Thus, the “Palestinian Cause” was born. Arafat manufactured a humanitarian crisis to divert attention from his goal to destroy Israel. It’s called “rebranding” and American youth, not to mention Presidents, academia, and the media, fell and continue to fall hook, line, and sinker for the rebranded narrative.

Israel is now seen as the oppressor hell-bent on killing Palestinians. When in truth, Israel has bent over backwards to its own detriment to negotiate and make peace with a people hell-bent, still, on Israel’s destruction. Bottom line, Israel is vilified for shooting back and for surviving.

So here’s a few slogans for teens to put on their posters this summer, who don’t want to be propaganda props and mouthpieces for the Father of Terrorism.  In essence, for teens who want to stand for truth:

“Israel survived the Holocaust. Get used to it.”

“Save Gaza from Hamas and the legacy of Arafat.”

“From the river to the sea Arabs have more freedom in Israel than in Arab nations.”

“Israel is a terrorist-defeating nation.”

“Arafat is dead. So is his dream.”

About the Author
Camie Davis is a non-Jewish writer and advocate for Israel.
Comments