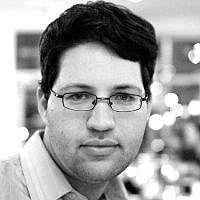 The Blogs
Akiva Miller
Apply for a Blog
Please note that the posts on The Blogs are contributed by third parties. The opinions, facts and any media content in them are presented solely by the authors, and neither The Times of Israel nor its partners assume any responsibility for them. Please contact us in case of abuse. In case of abuse,
Report this post.

On Monday the Knesset passed a small but significant amendment known as the Tzohar Law to allow Jewish couples to register for marriage in any of the religious councils throughout Israel, regardless of their own home address. Behind this seemingly benign bureaucratic adjustment lies an inconvenient truth for the hard-line rabbinical establishment: some rabbis authorized as marriage registrars hold different opinions on halacha than others.

Under the old system, couples could only register to marry at the religious councils where they lived. If they lived in different towns, the non-resident had to obtain a certificate from his or her local religious council, effectively maintaining the principle of local control over marriage. However, religious councils frequently flouted the old system of local control, and moreover, a number of religious organizations, such as Tzohar and a number of ultra-orthodox Batei Din (rabbinical courts) would perform the pre-marriage registrations on a country-wide basis, with the blessing of the Chief Rabbinate.

So why did the ultra-orthodox parties make such a fuss over the new law?

There are many individuals in Israel who encounter difficulties registering for marriage, especially immigrants suspected as non-Jews, converts, people with doubtful parentage who are suspected as mamzerim (i.e. children of certain illicit sexual relations), and other prohibited categories.

The old system allowed the Chief Rabbinate to perpetuate the false appearance that all marriage registrars apply the halachic rules on marriage essentially the same, so that assigning citizens to their local religious councils made no difference to the outcome of the registration process and was a simple matter of convenience.

Under the new system, however, the orthodox hard-liners recognize that different registrars hold different halachic views that differ from their own. They fear that allowing couples to choose their marriage registrar will open the floodgates of unchecked forum-shopping. Couples, especially where one might be subject to a marriage prohibition, will be able to seek out the most lenient and forthcoming registrars in order to permit a marriage that a stricter rabbi might have forbidden. From the perspective of the ultra-orthodox, this could signify the collapse of a system of control that placed some of the strictest interpreters of the halacha on marriage in key religious councils. On a deeper level, it would force them to acknowledge that there is a legitimate diversity of halachic opinions within Judaism.

However, there is critical catch that could outweigh the benefits of increased choice for marrying couples. At least since the late 1970’s, marriage registrars were required to check the names of all marrying couples against a database with the names of individuals who are prohibited to marry according to halacha. The Rabbinical Courts Administration maintains this database, which contains thousands of names of individuals temporarily prohibited from marrying pending proceedings before the Batei Din or permanently prohibited according to a Beit Din decision.

The information in this database is frequently out of date, inaccurate, and based on tips from informants and sources with no legal authority to investigate questions of marriage. It also includes information on individuals, including minors, who never registered to marry at all. As a result, the database causes unnecessary problems for many marrying couples each year. Every marriage delayed because of this faulty information system requires a prolonged adjudicative process before a Beit Din in order to resolve the issue, along with immense expense and suffering to the litigants. Once their status is cast in doubt, some citizens are never able to resolve their halachic marriage obstacles, leading to the permanent denial of their right to marry in Israel.

A recent State Comptroller’s report found that many religious councils did not use the database at all, or used it only sporadically. However, with the battle over local rabbincal authority lost, the orthodox hard-liners might redouble their efforts to apply their religious strictures through their control of the database.

It is likely that the hard-line factions in the Chief Rabbinate will now put greater emphasis on ensuring that every marriage be checked against the prohibited marriages database. It is also likely that they will put greater effort into keeping tabs on anyone suspected of a halachic marriage prohibition, whether or not they registered to marry in the first place. Indeed, Religious Affairs Minister Naftali Bennet and Deputy Minister Eliahu Ben-Dahan have already pointed the way by stating publically that the prohibited marriages database is the answer to the ultra-orthodox parties’ concerns.  The result of greater emphasis on the database could be a more powerful and oppressive “marriage police” than ever before.

The new Tzohar Law is hardly a revolution in the marriage laws of Israel. It remains the case that only orthodox rabbis are appointed as marriage registrars and hold a monopoly over all Jewish marriages throughout Israel. True marriage freedom is still far off.  The new law might, perhaps, signify a positive step towards greater religious pluralism in Israel in the future. For now, the celebrations are premature. Religious pluralists should remain vigilant.

About the Author
Akiva Miller is a Jerusalem-born researcher and lawyer, currently residing in New York.
Comments