I don’t think the lights have gone out, but they are dimmed and flickering.  I led a Tisha B’Av pilgrimage on Sunday to 4 villages in the Occupied Territories and the Negev that have been demolished, or are in danger of being demolished.  Hearts already heavy from the khurban  (destruction) we suffered 2,000 years ago and the khurban we are perpetrating today were even heavier because of the Nationality Law and  the slew of additional recent legislation designed to remove democratic obstacles to the current government’s non-democratic agenda.

We chanted from the Book of Lamentations after hearing the story of Al-Araqib from Aziz Al-Turi, standing where we have done everything possible to erase the evidence that the village was once was there. Continuing our chanting in the waning light while overlooking both the demolished and still standing homes in Umm Al Hiran, we knew we were mourning not only the khurban (destruction) of buildings and lives, but of values. 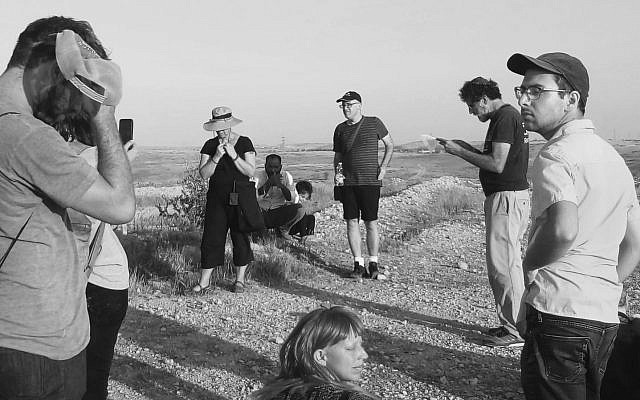 Chanting Lamentations where Al Araqib once stood. Aziz Al-Turi and his daugher are sitting.

After Menachem Begin won the elections in 1977, union activist and Labor Party leader Yitzhak Ben Aharon proclaimed, “The lights have gone out.” This admittedly can be seen as testimony to the inability of many in the Labor Party to accept that not everybody thought like them.  I am therefore very cautious about pronouncements. However, I cannot ignore the warning signs. In 1977 there were right wing politicians, including Begin himself, who supported the fundamentals of democracy. Today most of the remaining right wing democrats have been purged.

The threatened Jewish value system we mourn is not everybody’s, but it is ours.  Others may have a different Israeli dream, but the one we cherish is in danger.

I make a Tisha B’Av pilgrimage every year after laying tefillin during the afternoon minkha prayers because wearing the phylacteries we didn’t put on as usual in the morning is a symbol of renewed hope.  However, the series of moves our government is now taking are designed to make it increasingly difficult (not impossible) that the injustices they are perpetrating can eventually be undone.

We can argue how much the Nationality Law truly changes our reality.  However, as leading Israeli legal expert and Israel Democracy Institute senior fellow wrote in Haaretz (July 20th, 2018) the Law “raises the overt , blunt discrimination to the constitutional level… For Arab citizens to come to terms with the law(they couldn’t possibly agree with it) they would have to come to terms with being absent, or inferior;  according to the attorney general, they would have to accept having no collective rights as a national minority.” The Nationality Law gives official sanction to discrimination, and rubs the noses of Israeli Arab citizens in their second class status.  The contrast with Israel’s Declaration of Independence couldn’t be clearer. Demoting the status of Arabic is just the tip of the iceberg,

The law requires devoting State resources to creating new Jewish settlements, while ignoring the needs of non-Jews.  Our Declaration of Independence says that Israel “ will foster the development of the country for the benefit of all its inhabitants”  In a speech before the Keren HaYesod on October 29, 1947, David Ben Gurion declared, ” In the Jewish State, we will be the ones responsible, and not only for Jews… but for all residents of the State.   And for all residents of the State in equal measure…We will have to attend to the health and education, to development and to all other services for the Arab village, to a no lesser extent than to those of the Jewish village.”

True, the Nationality Law doesn’t explicitly forbid investing in new Arab communities. Arguably it only puts in writing what has been the case all along, despite the lofty words of Ben Gurion and our Declaration of Independence.  Since the founding of Israel, the State has created countless Jewish communities in Israel proper.  During this same period we have created 7 Negev townships in order to move Israeli Bedouin citizens out of their villages, and to take their lands.  I didn’t know whether to see the glass half full or half empty yesterday, after the Israeli planning system moved forward two of twenty-five new Jewish communities planned for the Negev, while voting against four.  These plans were being advanced before the Nationality Law, but it will now be more difficult to challenge the fact that communities for Jews are being built, even as Bedouin communities are being destroyed.

The underlying message is that it is now OK to act eifa v’eifa, with Jewishly prohibited discriminatory double standards.

In the Occupied Territories, we have allowed the building of Rawabi for Palestinians, while there are over 200 settlements and outposts in the West Bank, not including East Jerusalem. Even where Israel approves a master plan legalizing some building within an existing Palestinian community in Area C, it is almost always an inadequate plan not allowing natural development and growth. For two and a half years, the State dragged its feet on a Freedom of Information request by Peace Now and the Movement for the Freedom of Information. However, they recently received the data showing that 99.76% of what Israeli unilaterally declares to be State Land (much of it really isn’t) in the Occupied Territories, and has been allocated for use, has been allocated for Jewish settlements.   Even if one does not accept that the Fourth Geneva Convention applies in the Occupied Territories, and prohibits moving Israelis there, basic principles of fairness and equality demand an equitable use of State Land.

The Nationality Law did not create these longstanding policies, but it legalizes Jewish chauvinism and will make internal Israeli challenges to this institutionalized discrimination more difficult.

Last week the Knesset also passed a law ending the ability of Palestinians to go straight to the Israeli High Court, meaning that it will be a much longer, more expensive and difficult process for a Palestinian to get his or her land back.  Sneaking under the radar screen because of the Nationality Law, this law is also a part of the Government’s focused effort to eliminate the ability of the High Court they consider be an enemy of the people to every once in a blue moon serve as a check to plans to dispossess Palestinians.  It comes on the back of what I call the “Legalization of Theft” law, obviating the need to remove settlement buildings from land the State acknowledges to be privately owned by Palestinians. After all, checks and balances stymie the “will of the (Jewish) majority.”

Another law passed last week makes it illegal for voices critical of the behavior of Israeli soldiers to speak in schools.  Why would we want our children exposed to disturbing facts, opposing points of views, or taught to think critically? Too many soldiers have been caught on film acting illegally and immorally?  Let’s pass a law making it illegal to take photograph soldiers….. And, what’s wrong with hauling off of a Conservative rabbi to the police station at 5:00 am?

Israel is at a crossroads.  After hearing from Khan Al Akhmar spokesperson Abu-Khamis, we read verses from the three haftarot (readings from the prophets) associated with Tisha B’Av. Each ultimately teaches that the way to avoid national disaster and achieve national redemption is through acting justly, and fighting on behalf of the weak and powerless. 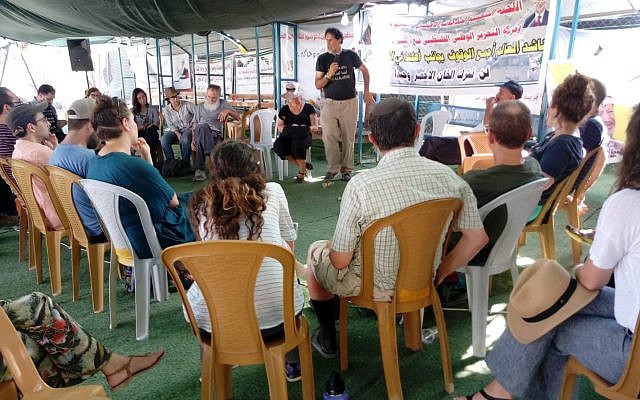 Khan Al Akhmar. Above: Chanting from Shabbat Hazon and Tisha B’Av Haftarot. Below.: Abu-Khamis is sitting underneath the banner, wearing a hat.

I refuse to believe that the lights have gone out, but they are certainly dim and flickering.

In Midrash Pesikta Rabati 8, we learn that when one of the lights was dim and flickering in the seven branched menorah that was carried off to Rome after the Tisha B’Av destruction, it could only be rekindled from a light from another branch. We are then reminded that “God’s Light is the human soul” (Proverbs 20:27), lighting the way in the dark, and doing God’s Work in this world.

This Shabbat we will read the first of seven haftarot of consolation after Tisha B’Av.  But Midrash Pesikta Rabati teaches us that we must console and strengthen each other when our faith and determination are flagging.  Just as one light of the menorah can only be strengthened or rekindled from another branch of the menorah, the wavering light in a human soul must be strengthened by the light of another human soul. It is our collective light that must rekindle the dim and flickering collective light of our society, and enable us to see a way forward. It is a terribly uphill battle, but I see new possibilities developing for saving endangered communities that didn’t seem to exist even a few weeks ago. There are new legal strategies, and a reawakening of on the ground activism and international concern.  And, just as God needs us to be God’s Light in this world, we will find the right path in the dark when we recognize God’s Light in every human soul.

These are the reasons why, just before breaking the fast in Susya, we sang the penultimate line of Lamentations traditionally repeated again after reading the final verse, “Hashiveinu Adonai aleikha, v’nashuva-Cause us to return to you, Adonai, and we will return.  Renew our days as of old.” (Not idealizing the past, I always add “and even more.”).  We asked for God’s help, and we sang to help each other return to and renew that place within ourselves that continues to believe in the possibility of a just Israel living up to our highest Jewish values, sees goodness and decency in our fellow Israelis, identifies strategies for change, and remains determined to give everything we have to make our ideals a reality.

Keyn Yehi Ratzon-May it Be God’s Will 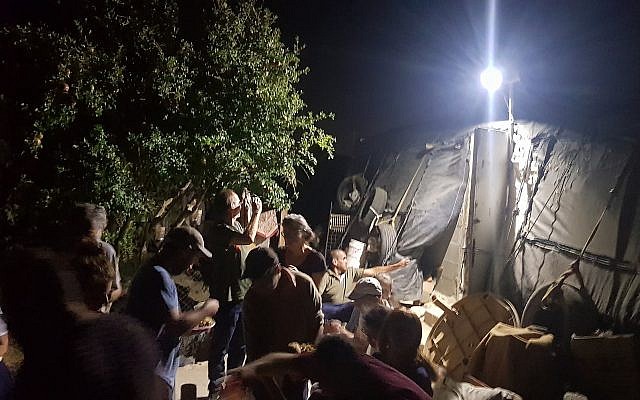 Breaking the fast and listening to Nasser Nawajeh in Susya
About the Author
Rabbi Arik Ascherman is the founder and director of the Israeli human rights organization "Torat Tzedek-Torah of Justice." Previously, he led "Rabbis For Human Rights" for 21 years. Rabbi Ascherman is a sought after lecturer, has received numerous prizes for his human rights work and has been featured in several documentary films, including the 2010 "Israel vs Israel." He and "Torat Tzedek" received the Rabbi David J. Forman Memorial Fund's Human Rights Prize fore 5779. Rabbi Ascherman is recognized as a role model for faith based human rights activism.
Related Topics
Related Posts
Comments